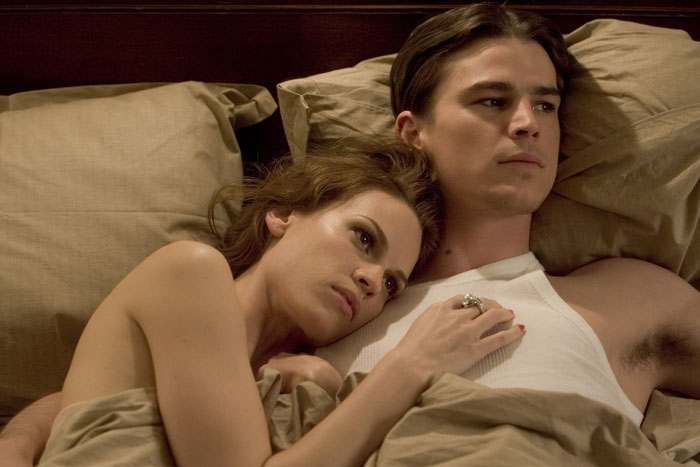 Director Brian De Palma ("Scarface," "The Untouchables") always flirts with excess and as of late his films have been edging into complete camp. That's not to say there's not an enjoyable trashiness of many of these, as proven by "Raising Caine" and his latest, "Femme Fatale," with which his latest shares a leering look at lesbian lovemaking. With "The Black Dahlia," though, the director makes a fatal mistake - he tries to play things seriously before devolving into a ludicrous last half hour, a finale so ridiculous it could be a guilty pleasure if what led up to it hadn't been largely tedious. De Palma has also let his actors down, allowing Aaron Eckhart to turn in his first awful performance. Fiona Shaw's histrionics are so out there one could believe the entire crew was in drunken hysterics goading her on. That's not to say there are not pleasures to be found here. There's a showy long take (cinematography by Vilmos Zsigmond, "McCabe & Mrs. Miller," "The Bonfire of the Vanities") where Bucky and Lee are involved in a shootout and the camera cranes over a building to as the Dahlia's body is discovered in an empty lot and there is a hilarious dinner scene at the Linscott home that plays like a twisted homage to the family dinners of "Shadow of a Doubt." Hitchcock idolater De Palma also lays out his climax over an outline of "Vertigo's" bell tower scene, complete with a woman who plays not two parts, but three. But therein also lies another flaw - Josh Friedman's ("War of the Worlds") adaptation of the James Ellroy novel all but strangles the story with too much plot and when he tries to tie all his threads together it turns out in a gnarly knot. The pugilistic pairing of Lee and Bucky as 'Fire and Ice' goes nowhere but a bit of heavy handed symbolism and Kay's background is so twisted she's painted as both victim and criminal while her former tormentor turns out to be such a non sequitur that he's literally replaced in the same scene with a villain from another plot. De Palma would have his "Dahlia" evoke "Chinatown," too, but its shoddy construction scandal is all too aptly a critique of his film. Attempts to tie Short's facial mutilation to both her killer and "The Man Who Laughs," a 1928 silent film no one in 1947 would be watching in a theater, are big stretches at best. The film certainly looks lush and is supported by a nice Mark Isham score and a cover of "Love for Sale" sung by a tuxedoed k.d. lang surrounded by lesbian show girls. Scarlett Johansson has been whipped into perfect period voluptuousness (and reportedly stalled the film's Venice premiere by forty minutes fussing with her outfit), but relies on her tendencies toward open mouthed shock and consternation. Dual Oscar winner Swank is oddly cast as the femme fatale, but her channeling of "Chinatown" era Faye Dunaway at leasts diverts and shows some stretch. Mia Kirshner, whom Swank is supposed to resemble (!), is all wrong for Short, though, playing her as a wide-eyed innocent in a series of completely unconvincing screen tests. Jemima Rooper ("Kinky Boots") and Rose McGowan ("Scream," "Monkeybone") are better as Short's acquaintances and Rachel Miner ("Bully") is reminiscent of "Doubt's" precocious little sister. Fiona Shaw has taken Aunt Petunia and turned her into an alcoholic raving lunatic. She sure is funny, though. On the actor front, Hartnett's merely OK as the film's main character, but Eckhart is so bad it is a wonder he wasn't replaced. Supporting males, like Mike Starr ("The Ice Harvest") and William Finley ("The Funhouse," "Tobe Hooper's Nightmare"), provide a well cast look, but John Kavanagh's ("Alexander") Emmet Linscott is more odd than memorable. There have been other films (i.e., "True Confessions") based on the Black Dahlia story, but De Palma's is both the worst and the loopiest. Perhaps most surprising is that the Black Dahlia story still remains to be told.

Medford, Massachusetts-born Elizabeth Short (Mia Kirschner) went to Hollywood in the 1940’s to seek fame and fortune as an actress. Instead, she found infamy when her nude body, severed in half and eviscerated of its organs, was found in a vacant lot in LA. This heinous murder led to a massive investigation by police but, to this day, has remained unsolved. Helmer Brian De Palma poses a hypothesis on who committed this terrible crime and tells us who killed “The Black Dahlia.” Police detectives Lee Blanchard (Aaron Eckhart) and Bucky Bleichert (Josh Hartnett), pugilists both, are the darlings of the LA police department. Mr. Fire and Mr. Ice are the drawing card in the fight ring that will secure positive public opinion for a proposition that will garner an eight percent raise for the entire police department. Their much-publicized bout does just that and Lee and Bucky are assigned to a high profile case. Then, Elizabeth Short’s mutilated body is discovered and the entire LA police, especially Blanchard, are thrown into turmoil. Although Blanchard and Bleichert are not initially assigned to the Short case, Lee becomes obsessed with the young woman’s murder, much to the chagrin of his live-in girlfriend Kay Lake (Scarlett Johansson). She and the two cops are like the three musketeers but, as Lee becomes more and more obsessed with the Short homicide, this triumvirate begins to fall apart. Lee takes to popping speed and isolates himself from Kay, pushing her and Bucky closer together romantically. But, when wealthy and vivacious socialite Madeleine Linscott (Hilary Swank) becomes a suspect in the killing, Bucky’s eye begins to wander. Linscott’s intro to the scene adds a new dimension to the case and things get bizarre. It has been four years since Brian De Palma directed a film (his last was the sexy, campy “Femme Fatale”) and, in the case of “The Black Dahlia,” absence does not necessarily make our hearts grow fonder. His latest work is a sumptuously produced piece of work with excellent production design, cinematography and costume but the adapted screenplay, by Josh Friedman from the James Elroy novel, is sterile and lifeless. The Black Dahlia” uses many cinematic contrivances that do not help tell the story of who killed Elizabeth Short. The device of Bucky attending a theater to see the silent classic, “The Man Who Laughed”, though of significance to the story, rings incredibly false. (Didn’t silent film almost disappear from the face of the earth by 1947? So who would even go to see one, especially an LA cop?) Then, there is the “screen test” of Elizabeth that is supposed to give the murdered girl depth of character but is merely a manufacture that lacks any believability if you have ever seen a screen test, especially from the 1940’s. These, and other aspects of the film, draw attention but in a bad way. Then, there’s the acting. Josh Hartnett isn’t bad as Bucky but Aaron Eckhart, whom I consider the superior actor of the two, is horrible as the troubled, obsessed Lee. Blanchard blows from supremely self-confidant to totally possessed by the dead girl without benefit of real reason. Scarlett Johansson is proving to be a one note actress and uses her voluptuous body and pouty lips in lieu of acting. Hilary Swank has some fun vamping it up and overcomes, a little, the bad script. Of the supporting cast, only Fiona Shaw comes out on top as Madeleine’s hophead, alcoholic mother who has a great “Mommy Dearest” moment that is, almost, worth the price of admission. On a camp level, hers is one of my favorite supporting performances of the year so far. De Palma derives many scenes in “The Black Dahlia” from his own work, such as his also derivative Odessa Steps sequence in the “Untouchables,” and, of course, Alfred Hitchcock. One would think that he would try for some originality, at this stage of the game, but he has always been a mimic of himself and others.