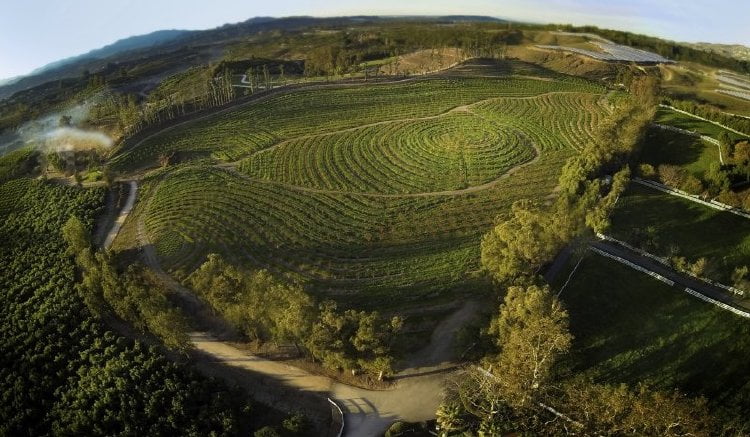 John and Molly Chester were a wildlife cinematographer and food blogger living in a cramped apartment in Southern California. One day, John’s job exposed him to an animal rescue and he fell in love with and adopted a dog they named Todd. But Todd’s incessant barking when left alone led to a demand from their landlord. Forced to consider their promise that Todd’s home would always be with them, they embarked on Molly’s dream of creating “The Biggest Little Farm.”

What the Chesters, heavily indebted to their traditional farming consultant Alan York (who died during the eight years John documents here), have created on 200 acres of barren land is truly extraordinary, a rejuvenation of a natural paradise where everything, including pests, contribute to the biosphere. So why do I feel so conflicted about this documentary? Perhaps it has something to do with the fact that it appears to have been a multi-million dollar enterprise, the type of thing only accomplished by those already entitled to a wealth of resources, farming entrepreneurs who, in turn, market their upscale niche produce to those who can afford it. It would be a wonderful thing if every lesson imparted by York were adopted by the agribusinesses, like those that surround Apricot Lane Farms, which have mostly wiped out traditional farming, but the economics which have driven the trend are never addressed, just as the financial backing on hand here is left mostly to the imagination. The Chesters seem more benevolent rulers of a fiefdom than hard working laborers of the land, so just who is to adopt their model? That said, the lessons of the natural world, beautifully captured by Chester (he directed the film while becoming a farmer from scratch), are important ones, often counterintuitive. In fact, John is quite skeptical as he narrates his and Molly’s adventure, at least until around year five, when everything begins to come together just as York said it would. Instead of getting to planting, their first job is to dig everything up. Animals are the key to good compost, but Ugly Betty, the pregnant sow they buy and rename Emma, doesn’t make it easy with her diarrhea. During a drought, with no fresh water getting into their pond, their ducks’ waste forms toxic sludge. John believes the seventeen different varieties of stone fruit York recommends is overly complex, and that’s before starlings destroy 70% of their yield and snails overtake their trees. Coyotes hunt their chickens and when John eventually shoots one, it is a betrayal of their commitment to harmony with nature. But we see smart planning begin to have its effects. Ground cover enriches the land. Diverting the ducks from that pond allows them a feast of snails. Aphids overtake good plantings but ladybugs arrive to save the day. Gophers aerate the soil and prove a diversion for those coyotes, who keep them in check. The spoiled fruit becomes animal feed, as do the maggots created by the flies drawn to manure. Before and after overhead shots of the farm are truly incredible. Not everything bad has its counterpoint, though. Greasy, an oddball rooster whose attachment to Emma is endearing (if over anthropomorphized, especially when it is suggested he has fathered her most recent litter), has a run in with another beloved member of the Apricot Lane family. John mentions early on that he hasn’t yet been able to ponder his bond with animals being raised for food and, except for a quick scene of adult pigs being loaded onto a truck, this issue is never mentioned again. Then there are the wildfires increasingly threatening California - John opens his film with one approaching the farm, Molly telling him over walkie talkie she is about to abandon the home - yet when the documentary catches up with that event, we see nothing of its aftermath, John stating that it is a fact of life which may one day wipe them out. “The Biggest Little Farm” is inspirational in how it documents the resilience and intelligent design of nature, but who is it inspiring? Only those with seemingly unlimited financial resources and a large crew of devoted interns need apply. Grade:

John and Molly Chester, because of their beloved dog, Todd, gave up their tiny LA apartment to buy a depleted 200-acre farm in Ventura California. Their plan: transform the now-wasteland into a diverse bio-ecosystem that will reawaken the land in “The Biggest Little Farm.” I had mixed feelings asI watched director and co-participant John Chester’s interesting documentary about a bio-diverse farm that would, over the eight years, have 10000 fruit trees and over 200 different agricultural crops. On one hand, I applaud the couple’s grand efforts that came to be because, they say, of their beloved dog Todd. They left the comforts of the big city and drove their stake into the ground, literally, in their eight year, ongoing experiment. Yes, John and Molly Chester, an Emmy-winning cameraman and a foodie blogger, had a vision and put it into action, with the help of their visionary adviser, Alan (who succumbed to cancer during the making of the documentary). The thing that bothered me, on the other hand, is the filmmakers do very little to tell us just how this noble project got funded. There are allusions to crowd sourcing money, volunteers and interns, but it is never really stated how it is all paid for. The impression the film leaves with me is that, as said, it is a noble effort but is it one that can really help to make a change in our world, not just the Chesters’ own little fiefdom? It is admirable and I appreciate the efforts they make, but the pie in the sky dream world, I have to say, is a tiny drop against the tide of corporate greed that is destroying the world as we know it. John Chester’s mastery of wildlife photography is a big plus in telling the couple’s story.