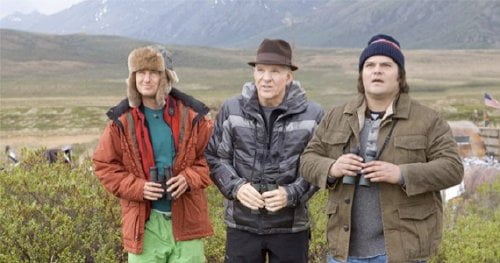 Stu Preissler (Steve Martin), Brad Harris (Jack Black) and Kenny Bostick (Owen Wilson) are each having a personal crisis of a different nature which the three rivals all decide to combat it in the same way - competing with each other to see who can spot and identify the most species of birds in North America all during "The Big Year."

I learned from personal experience that birders are an obsessive lot when a painted bunting took temporary residence across the street from my house for about a week after a storm. Every morning we'd be greeted by a group of birders, many with out of state license plates, huddled with scopes and binoculars on our small private way. If only "The Big Year" played as strongly as a movie about birding as it does as one of those films where the journey doesn't matter as much as that same old revelations about what matters in life. Maybe director David Frankel ("The Devil Wears Prada," "Marley & Me") had this in mind when he began because the finished product feels gutted of much of its content - why else would Steven Weber (TV's 'Wings') appear in one relatively meaningless scene and Tim Blake Nelson ("O Brother, Where Art Thou?") be relegated to scenery? Stu's a big time exec whose wife Edith (JoBeth Williams, "Poltergeist") encourages him to 'carpe annum' while his underlings Barry and Jim ('Community's' Joel McHale and "Cop Out's" Kevin Pollak) panic about every business decision when Stu's working on his Big Year (the concept is explained in historical context with John Cleese narrating and some whimsical animation). Stu's got a grandchild on the way, but his utter lack of regard for his colleagues' concerns undermines any life changing conclusions he draws. Surprisingly, it's Jack Black's character of Brad that has all the film's best moments. He's a programmer who hates his job but otherwise has little life except for his bird passion. His mom (Dianne Wiest) encourages him to go for his Big Year but dad (Brian Dennehy) finds it a waste of time and money. It may be easy to predict how Brad and dad will bond, but the scene plays beautifully. Brad also connects with Stu only to feel betrayed (no birder on a big year will admit it, the better to keep the competition off guard), but Black and Martin have comfortable chemistry in their May/December bromance. Black also has the benefit of a sweet attempted romance with Ellie (Rashida Jones, TV's 'Parks and Recreation'), an expert bird caller who's initially unavailable. Owen Wilson's Bostick is the current champ determined to keep his title at all costs and even the genial Wilson cannot keep the character from being thoroughly unlikable. His wife Jessica (Rosamund Pike, "An Education") is trying to go though infertility treatments with a husband in absentia. One of the odd conflicts about "The Big Year" is how unscrupulous the competitors are in misleading others for a title that is arrived at on the honor system. Frankel makes this point so awkwardly (Stu overhears Kenny refusing to add to his tally on the word of another birder who recognizes a call (a visual is not required) when Kenny himself cannot), it plays like a staged setup for Kenny to cheat. The characters run from one end of the country to the other - from the Florida Everglades to Attu, the westernmost of the Aleutian Islands (the Yukon stands in) - and must turn on a dime in reaction to storm conditions which bring a birder's banquet, and yet most of the birds are featured as split second shots through a binocular. There's a nicely written scene between Brad and his father where he explains why the humble grey/brown plover is his favorite bird, but otherwise only a pink-footed goose and two different owls come into any kind of focus. One week after "Real Steel," "The Big Year" also goes for a Rockyesque closer where going the distance proves more satisfying than actually winning. "The Big Year," adapted by Howard Franklin ("Antitrust") from the Mark Obmascik book, is poorly paced, lurching in fits and starts. Musical selections are amusingly avian in nature, from an instrumental 'Blackbird' to Brad's 'Surfin' Bird' ring tone. Character ties to the bird world include charter boat owner Annie Auklet (Anjelica Huston!) and blogger Ichabod Crane ('The Big Bang Theory's Jim Parsons). "The Big Year" clearly flew off course somewhere along its production. What's left is a deconstructed omelet of a film with the occasional satisfying forkful.