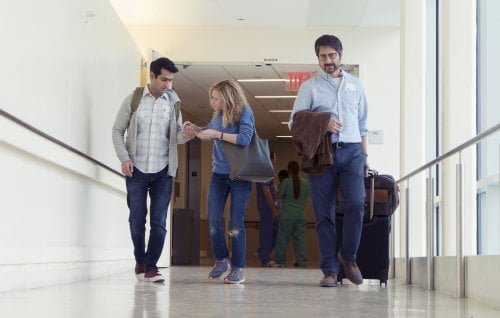 When grad student Emily (Zoe Kazan, "Ruby Sparks") heckles Pakistani comedian Kumail (Kumail Nanjiani, HBO's 'Silicon Valley') he approaches her after the show. They trade banter, then fall into bed, but what starts as a fling continues into something deeper. But Kumail hasn't been honest, still believing in the arranged marriage his traditional Muslim parents expect and when Emily finds out they break up. Kumail doesn't realize Emily is the woman he wants to marry until she's put into an induced coma while doctors struggle to determine the cause of "The Big Sick."

Kumail Nanjiani met producer Judd Apatow, he told him about the true life courtship of his wife, Emily Gordon. Apatow thought this would make a great movie and Nanjiani began to write it, but something was missing in his first drafts until his wife began to write with him. The resulting movie, directed by Michael Showalter ("Hello My Name Is Doris"), hilariously explores the cultural obstacles presented not only by Nanjiani's family, who seem lifted from the "Meet the Patels" documentary, but Kumail's awkward bonding process with Emily's parents Beth and Terry Gardner (Holly Hunter and Ray Romano). Where the film comes up short is in the character of Emily herself, Zoe Kazan's open and quick-witted Emily becoming infantalized during her illness and recovery. The film's first 45 minutes is a three-way split establishing Kumail's career as a Chicago stand-up, his weekly dinner with parents Azmat (Anupam Kher, "Bend It Like Beckham") and Sharmeen (Zenobia Shroff), older brother Naveed (Adeel Akhtar, "The Dictator") and sister-in-law Fatima (Shenaz Treasurywala), and his relationship with Emily. Kumail, who's an Uber driver by day, is in the running for a slot at the Montreal Comedy Festival along with a couple of his colleagues. Every Sunday family dinner is punctuated with Fatima's exclamations that he should be on SNL and his mother's 'surprise' drop-in guests, single Pakistani women whose pictures Kumail stores in a cigar box but never follows up on. He finds himself most alive, though, spending time with Emily, something the two continue to do despite their protestations that they're too busy to date. When Emily admits she's been 'overwhelmed' by Kumail, he responds similarly, but he pulls out his 'two day rule' when she invites him to meet her visiting parents. Then she opens his cigar box and the romance goes up in flames. A brief time later, a late night phone call prompts Kumail signing the medical form allowing doctors to put Emily into an induced coma. He's told her family should be notified and so Kumail finally introduces himself to Emily's parents via her cell phone. Southerner Beth, who knows all about him, is hostile, but New Yorker Terry, noting Kumail's vigilance in the hospital waiting room, sympathetically relents. The Kumail who was afraid to lose his family over Emily finds himself drawn into a new one. This is the real meat of the film and Nanjiani's interactions with Hunter and Romano are hilariously real, Hunter's maternal fierceness and Romano's well meant insensitivity overwhelming the Pakistani in a totally different way while revealing much about the Gardner marriage. A breakthrough occurs when Kumail is heckled during a show the Gardners have attended and Beth goes ballistic taking on the jerk. Nanjiani is admirably unafraid to portray himself in a bad light, his path-of-least-resistance MO, paralleled in his future father-in-law, causing hurt to countless women, including his mother. He's redeemed by his emotional bomb of an act, his realization of what Emily means to him losing him his shot at the big time, his confrontation with his family a much protracted stab at independence and the American way of life. Hunter and Romano steal the movie though, and it often seems as though it is them, not Emily, that Nanjiani has fallen in love with. The Emily that springs back from death's door is defined by her parents, childlike and needy. Kazan's a good actress who eventually reemerges as her earlier incarnation, but this third act had me calling 'red flags,' just as Emily had earlier. Otherwise Nanjiani and Gordon's screenplay is packed with wonderful observational moments, like Nanjiani's one man theater piece embracing his heritage while boring his audience or the stress-induced outbursts sprinkled throughout. The stand-up comedy scene features banter both supportive and competitive from Nanjiani, Bo Burnham, SNL's Aidy Bryant and Kurt Braunohler. Grade: