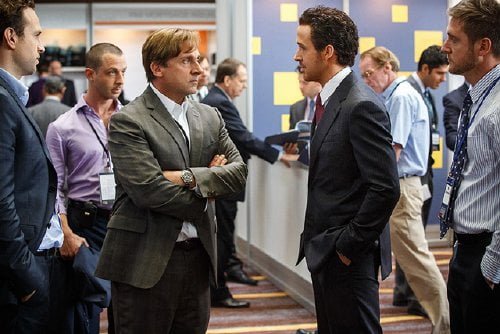 'It ain't what you don't know that gets you into trouble. It's what you know for sure that just ain't so.' Mark Twain In 2005, the very first cracks began to appear in the US banking industry, particularly with sub-prime mortgage market. These institutions that should be the fiscally responsible to the public would cause, through stupidity and greed, America’s Great Recession just two years later because their financial experts failed to see “The Big Short.”

As Wall St. was still flying high on subprime mortgage securities which regulatory agencies continued to criminally overvalue, a few canny investors figured out what was going on and what was about to happen. Outsiders like Mark Baum (Steve Carell) had his group at Morgan Stanley bucking the tide after learning that across the country, Scion Capital's hedge fund manager Michael Burry (Christian Bale) had Goldman Sachs in stitches as they agreed to sell him $100 million betting against the housing market in "The Big Short." One might not necessarily think of the writer/director of the "Anchorman" comedies as the filmmaker to bring a complex subject like the 2008 financial crisis to the screen, but damned if Adam McKay, who adapted Michael Lewis's book with Charles Randolph ("Love & Other Drugs"), hasn't made an illuminating film, equal parts horror and hilarity. With Steve Carell leading one of the finest ensembles of the year, "The Big Short" entertains while explaining just what happened to those who don't know the difference between a stock and a bond. If "The Wolf of Wall Street" satirized Wall Street's greed, McKay's film focuses on those whose feet were more firmly planted on trembling ground. Speaking of "Wolf," that film's own Margot Robbie, lolling in a tub, is the first McKay enlists to break the fourth wall and explain financial terms at periodic intervals. Celebrity chef Anthony Bourdain parallels fish stew, where chefs hide day old seafood, to bad assets and we find Selena Gomez with behavioral economist Dr. Richard Thaler at a casino to expound upon why people continue betting on the same thing. Deutsche Bank's Jared Vennett (Ryan Gosling), who believes in Burry's mocked analysis and inadvertently tips off one of Baum's crew, also turns to address us directly. There is a fourth team in play. Jamie Shipley (Finn Wittrock, TV's 'American Horror Story') and Charlie Geller (John Magaro, "Carol") are two young guys who've grown $110K into a $30 million fund, not enough to get them the ISDA master agreement that would allow them to deal directly with the banks on the new shorting scheme. So they enlist an old teacher, a former investor turned doomsday prophet Ben Rickert (Brad Pitt), to get them in the door. While the film is frequently hilarious (Baum on Vennet - 'I can't hate this guy. He's so transparent in his self interest, I kinda like him'), McKay never lets us forget the human cost. Baum sends his team of Danny Moses (Rafe Spall, "Life of Pi"), Porter Collins (Hamish Linklater, "Magic in the Moonlight") and Vinnie Daniel (Jeremy Strong, "The Judge," "Selma") to Florida to investigate the subprime fallout and they're astonished by abandoned McMansion developments and the stripper (Heighlen Boyd) who's been buying up properties with no money down. Baum himself is haunted by the implications of what he's betting on and, we eventually learn, has a relevant personal tragedy weighing him down. Burry, the guy who first smelled a rat, finds himself cornered when his investors lose confidence. And if love is blind, so, apparently is greed, rather bluntly symbolized by the dark glasses worn by Melissa Leo's Standard & Poor analyst. McKay keeps us with him as he spins plates in the air, using montages of split second cuts to capture various observations of the zeitgeist as we follow his insider antiheroes. Carell represents the anxiety of one horrified by the inevitable, Gosling the slick salesman, Pitt the world weary, Wittrock and Magaro the exuberance of joining the party. Best, though, is Bale, whose glass-eyed, heavy metal loving eccentric is the eye of the hurricane. Grade:

It has been a few years since this country and the world were plunged into the greatest financial crisis since the Crash of 1929 and the Depression, so we can look back on events with cool retrospect. (Unless, of course, you do some research on the crisis – then you get angry all over again. I did.) Director and co-writer Adam McKay, with Charles Randolph, adapt the 2010 book by Michael Lewis, The Big Short: Inside the Doomsday Machine, and bring us back to those bad old days – but, with a sense of humor. The film follows four outsiders to the Wall Street wheelers and dealers who decide the fate of the working man with their investment games. The huge ensemble cast includes the outside players – Christian Bale as Dr. Michael Burry, Steve Carrell as Mark Baum (for some reason, the real life Steve Eisman’s name was changed for the film) and Brad Pitt as Ben Rickert and others – who saw the problem coming, tried to stop it and were ignored by the banking gurus. The outsiders proved right (and made billions), the insiders totally wrong and the American people the recipients of the burdens, like bank bailouts. Of all of the high level financiers accused of misdeeds, fraud and more, just one banker went to prison while hundreds, if not thousands, were responsible for the Great Financial Meltdown. While the bulk of “The Big Short” is a chronicle of events that led to the greatest financial crisis of our time, the filmmakers take the opportunity, with clever asides, to explain the complex fiscal issues in a clear and understandable way. Margot Robbie, drinking champagne in a bubble bath, makes comprehensible what is the subprime mortgage business; Chef and world-traveler Anthony Bourdain uses an old fish analogy to explain Collateral Debt Obligation (CDO); Selina Gomez brings to light synthetic CDOs (CDOs of CDOs) playing blackjack. Each of these interludes helps the viewer maneuver the maze that the experts created, stupidly, to our financial chagrin. Even with the clever explanative asides “The Big Short” might be a tough sell to the average filmgoer with all of its mumbo jumbo and sleight of hand financial maneuverings, It is a more thought-provoking film that will have appeal to those of us who did not have a clue what happened then, but want to understand it now.