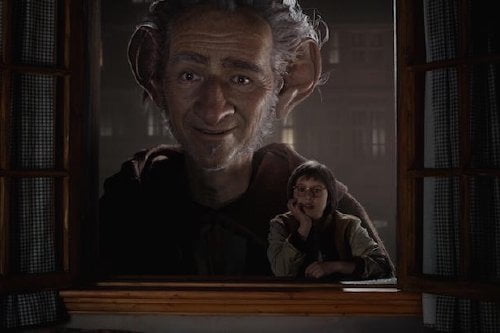 Ten year old Sophie lies, sleepless, in bed in the orphanage where she lives when she hears a loud clatter of noise outside. Ever curious, she looks out the window and sees the unbelievable – a giant – and he sees her. Afraid to arouse the attention of the humans (or, beans, as he calls us), he takes the girl far away. Frightened, at first, she soon learns that her new friend is kind and gentle and she calls him “The BFG.”

10 year-old Sophie (Ruby Barnhill) is always the only little girl in her London orphanage still awake at the witching hour. One night she hears a noise and peering out the window she sees an astonishing sight, a 24 foot tall giant (Mark Rylance, "Bridge of Spies"). Afraid that news of his existence will spread, he takes Sophie back to his home in Giant County. Initially terrified, the young girl learns that, unlike his much bigger brothers, this giant doesn't eat 'human beans' and is very kind if not especially bright. Sophie calls him "The BFG." Get your minds out of the gutter! "The BFG" is adapted from Roald Dahl's book (by Melissa Mathison, "The Black Stallion") and the title stands for 'the big, friendly giant.' Director Steven Spielberg has long wanted to bring Dahl's favorite of his own children's books to the screen (originally with Robin Williams in the titular role), but unfortunately this is one of his weaker efforts, more "Hook" than "E.T." There is magic in the opening scenes as we watch the BFG hide in plain sight whenever an unlikely passerby comes along at the late hour. He's busy blowing dreams into the windows of sleeping children with his giant horn. But when Sophie tries to escape his home, it is a nightmare he must deliver, one which warns her about what will happen if the other giants, led by Fleshlumpeater (Jemaine Clement, "What We Do in the Shadows"), should see her. They're all nearly twice as tall as the giant they abuse and call 'the runt,' and once their suspicions have been raised Sophie and the BFG come up with a plan to rid the land of them once and for all. Spielberg uses a combination of live action and performance-capture, but the effects incorporating Sophie into her CGI friend's world aren't always very convincing, often looking like twenty year old technology. A scene in which the odd couple go to Dream Land to capture Phizzwizards is all too reminiscent of Tinkerbell. There are gross out effects as well, the BFG's snozzcumbers resembling giant cukes oozing wriggling worms, his upside down carbonated Frobscottle beverage producing the opposite of a burp (called whizzpopping here). The film bogs down in its midsection, picking up again when the two travel to Buckingham Palace. But even there we must wonder why the filmmakers, who've taken pains to provide real world objects for the giants to repurpose in Giant Land, give him a sword for a knife and pair it with a giant fork. Rylance creates a wonderful character (portrayed with oversized ears, hands and feet), his Gobblefunk sounding like cutesy Cockney ('orfim' for 'orphan, 'Telly-telly bunkum box' for TV), the timbre of his voice conveying the gentleness of the BFG. Also good is newcomer Barnhill, investing Sophie with a seriousness of purpose. 'Downtown Abbey's Penelope Wilton makes a charming Queen (complete with a trio of Corgis), served by her handmaiden Mary (Rebecca Hall, "The Gift") and butler Mr. Tibbs (Rafe Spall, "The Big Short"). While the other nine giants are all distinct in design, only Fleshlumpeater and Bloodbottler (Bill Hader, "Trainwreck") distinguish personalities. "The BFG" may please the little ones, but Spielberg fans are in for a disappointment. At least it's far better than "Jack the Giant Slayer." Grade:

Steven Spielberg’s latest film is a warm hearted adventure combined with a story of the friendship between a young girl and another creature. That sounds a little like “E.T.,” right? It is not, though. “The BFG” is a charming adaptation, by Melissa Mathison (who scripted “E.T.”), of the classic Roald Dahl children’s book of the same name and is a distinctly Spielberg work. But, it is not another “Extra Terrestrial.” That said, and looking at “The BFG” without comparison to the 1982 classic, I found it to be a great deal of fun with strong chemistry between Sophie (newcomer Ruby Barnhill) and her BFG, with Mark Rylance providing voice, face and capture motion to the benevolent Big Friendly Giant. Young Burnhill makes a notable splash in her child star turn as a tough, smart and capable kid. This is from a children’s story and the plot is straightforward. Sophie befriends the gentle giant who refuses to follow giant custom and eat children. He takes Sophie from the orphanage because hr does not want the “beans” to know that giants exist. The BFG’s explanation of why he does not want us to know about them is almost poetic in its malapropisms, as delivered by Rylance. But, the other giants show no hesitation in gulping down children (their favorite food), and herein lies the dilemma. How do you get rid of flesh eating giants? This brings us to an elaborate plan to enlist the help of the Queen (Penelope Wilton) to rid Britain of the hungry giants. Let me leave it at that as the story is fun and should roll out for you fresh and new. “The BFG” hits a bull’s-eye for its obvious target audience, say, about 5 to 15 year olds. Do not get me wrong, it is thoroughly entertaining for any age. It is not a transformative film like other Spielberg works but its heart and spirit are in the right place.