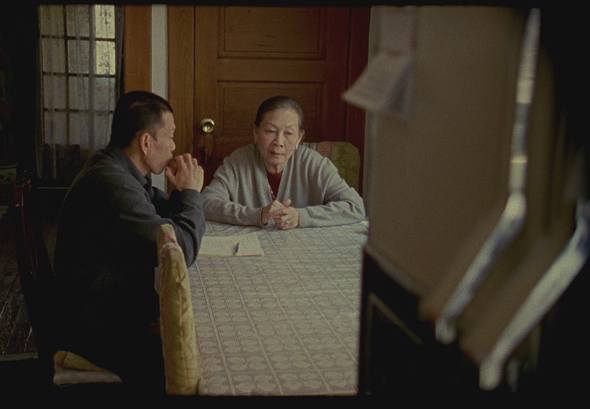 As a young boy in Laos during the Vietnam war, Thavisouk Phrasavath learned that thousands of years ago, his elders predicted there would come a time when the universe would break apart, country by country, religion by religion - that husbands and wives would split and their children would escape with the winds. Little did he know that this would all come to pass by the time he reached thirty. Codirecting with cinematographer Ellen Kuras ("Eternal Sunshine of the Spotless Mind"), Thavi tells his story of those many layers of "The Betrayal."

This 2008 Oscar-nominated documentary features meditative images from renowned cinematographer Kuras skillfully mixed with archival footage, stills and talking heads by editor Thavi into a story with so many shocks and ironies that it resonates in waves after the telling. Just when we think we are watching a story about American Imperialism and the illegal U.S. wartime activities that wrecked thousands of lives in so many ways, Thavi throws a curve ball and weaves in the story of his father, a military officer on the American side they long thought dead, and another iteration of the film's title comes forward. Then there is the perspective of Thavi's mother and how her culture and spiritual beliefs are stolen by her children's immersion in an American way of life. Kuras's first image is an idyllic rural poem - two young boys riding water buffalo into the Mekong river, a waterway central to that region's economy, later a passage to escape. Even with the vaguest idea of what this documentary is about, these images make one wonder why anyone would want to leave such a beautiful place. Then, during the Vietnam war, the Phrasavaths were proud of their father the officer but when the Americans pulled up stakes and left Laos, things changed rapidly. At first, it seemed as if the communist Pathel Lao, who took hold of the nation, had everyone's best interest at heart, but after their father was taken away for 'reeducation,' the Phrasavaths became pariahs in their own neighborhood. Thavi stole away to Thailand and waited for the rest of his family, who joined, minus his eldest and youngest sisters (their mother was given no choice to wait for their return), two years later. Given a choice of destination in a refugee camp, Thavi's mother chose America, a country she was sure would care for her and her eight children after her husband's sacrifice and service. Now she sits at a kitchen table, numbed by what has happened to her life. Filmed over twenty-three years, Kuras and Phrasavath depict the hell that greeted Thavi's family when they had expected heaven. Left in a two-room apartment with another Asian family they had no common ground with, no food and no ability to speak the language, Thavi's mother had to struggle to survive next door to a crack den in a neighborhood that was a breeding ground for violent Asian street gangs. They were a family like those depicted taking over Walt Kowalski's neighborhood in "Gran Torino," but without a support group or even the old racist with a rifle. The most natural thing from home - to go fishing for food - now got one chased by police. Every ugly aspect of poor urban American life took hold of the family as the wiser ideals of the Laotian elders were cast by the wayside. If there is a slight fault to the film, it can feel like it is meandering away from its central thesis at times when it is actually overstating its point. But even this 'fault' is part of the film's quiet, building power. Howard Shore's score is partnered with pieces from string quartets, Laotian revolutionary folk songs and hip hop from the streets of New York City, all of which complement Kuras and Phrasavath's work. In telling the decades long struggles of one Laotian family, "The Betrayal" has much to say about the United States.