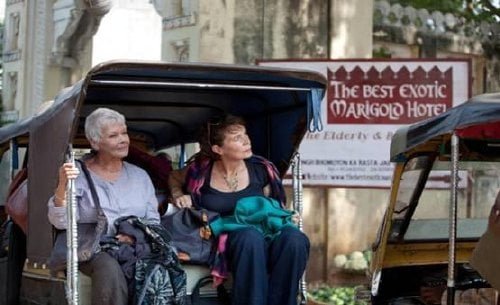 Seven Brits, from different walks of life, are in their senior years and face a hard retirement in a bad economy. Searching for a place to stretch their pounds to have more comfortable twilight years they all come across the enticing internet ad for a luxury retirement residence in Jaipur, India. They pack their bags and pull up roots and head to “The Best Exotic Marigold Hotel.”

Recently widowed Evelyn Greenslade (Judi Dench, "My Week with Marilyn," "J. Edgar") must sell her flat to pay off unexpected debts. Recently retired civil servant Douglas Ainslie (Bill Nighy, "Love, Actually," "Pirate Radio") needs to appease his wife Jean (Penelope Wilton, 'Downton Abbey') with better living conditions than he can afford. Muriel Donnelly (Maggie Smith, "Harry Potter," 'Downton Abbey') wants a hip replacement faster than she can receive one in England. Norman Cousins (Ronald Pickup, "Prince of Persia: The Sands of Time") and Madge Hardcastle (Celia Imrie, "Bridget Jones's Diary," TV's 'Titanic') are looking for romantic excitement. Lawyer Graham Dashwood's (Tom Wilkinson, "In the Bedroom," "The Debt") had enough of the old boy's club. All of them find the website for a Jaipur retreat appealing to 'the elderly and beautiful' and decide to take a chance on "The Best Exotic Marigold Hotel." Working with an adaptation by Ol Parker ("Imagine Me & You") of the Deborah Moggach novel 'These Foolish Things,' director John Madden ("Shakespeare in Love," "The Debt") has crafted one of those feel good cliches dressed up with enough touches (far flung locales, multigenerational relationship issues, respected European actors) to appeal to the art house crowd that the old Miramax used to release. This movie is sure to appeal to an older crowd, and it's great that a film has been made for their demographic. One just wishes it were a little better than this one. That said, the movie has a dream cast and, surprisingly, didn't follow the map I laid out for it when we first meet our travelers. As the only group member familiar with India, Graham takes charge when transportation to the Best Exotic falls through (and one of the film's first clunkers is how seven people traveling to the same lodgings a half a world away all sit in the same row of airport chairs and band together before they've breathed Indian air). One very long bus ride and a convoy of tuk-tuks later, they arrive at the hotel and discover a crumbling old building run by a very young and enthusiastic Sonny Kapoor (Dev Patel, "Slumdog Millionaire") whose motto is 'everything will be all right in the end, and if it is not all right, then it is not yet the end.' Evelyn, Graham, Douglas, Norman and Madge all adjust in their own ways. The bitter and racist Muriel spends her time in a wheelchair gradually communicating with Anokhi (Seema Azmi), a servant and an untouchable. Jean refuses to leave the hotel and is the ultimate downer, hating everything while her husband delights in the sites (which, oddly, we never are shown). Meanwhile, Sonny struggles to upgrade the ancient structure inherited from his father while wooing customer support rep Sunaina (model-turned-actress Tena Desae) before his domineering mother (Lillete Dubey, "Monsoon Wedding") arrives to put a stop to both. There are, of course, some romantic pair ups among the senior set. Judi Dench is wonderful as a widow embracing a life she never expected with grace and charm. She even gets a job at the same company Sunaina works at (another convenient coincidence). But it is Tom Wilkinson who has the most moving story and the actor is wonderful to watch, whether he is critiquing Jean so smoothly she doesn't even recognize it or finally taking Evelyn into his confidence. Nighy almost always brings a smile and he does here with his awkward, rail thin carriage and courageous optimism. There's little likable about Wilton's character of his wife, but she's great in the role. The great Maggie Smith, however, has the burden of the most underwritten character with the most inexplicable character arc. Imrie and Cousins are mostly around for comic amusement. Dev Patel tries too hard, but Desae has a lovely presence. For a film shot on location in India, we really see little of the place, but are given the impression of bad smells, oppressive heat and crowded streets. The score is predictable. Madden doesn't try to color outside the lines here, but even though the metaphorical use of a bird taking flight has been done before, he does it with a nice touch here.

A talented cast and colorful locale help make TBEMH a light comedy that is better than it should be but without much substance. The “seen it all before” story follows convention with the seven retirees each having a story. Evelyn Greenslade (Judi Dench) is recently widowed and wants to get away from old memories; Graham Dashwood is a now-retired barrister who is returning to India, on a personal mission, after being away for 40 years; Douglas (Bill Nighy) and Jean (Penelope Wilton) Ainslie come to the Marigold Hotel because of strapped finances; Muriel Donnelly (Maggie Smith) made the journey to get a quick hip replacement; Norman Cousins (Ronald Pickup) wants to meet Miss Right; and Madge Hardcastle (Celia Imrie) is there, it seems, to just be there. The production looks good with its bright colors, the locale is, indeed, exotic and the acting is serviceable but the script, adapted by Ol Parker from the Deborah Moggach novel, has no life to it. The characters are wooden and two-dimensional and fail to evoke sympathy, never mind empathy, in me.