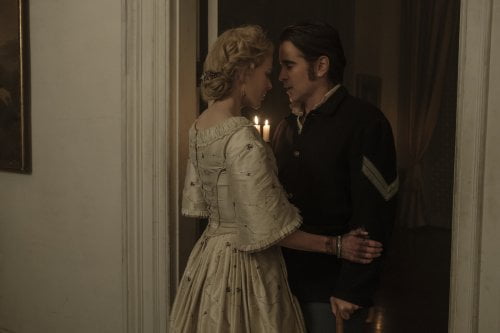 In 1864, Amy (Oona Laurence, "Southpaw") wanders farther than she should from Martha Farnsworth's (Nicole Kidman) Virginia girls school while picking mushrooms. With the booming of a Civil War battlefield in the distance, the young girl is calm, until she spots a wounded Yankee soldier lying against a tree. But John McBurney (Colin Farrell) isn't threatening, so Amy helps him back to Farnsworth Seminary for medical treatment where the handsome soldier manipulates the feminine household into "The Beguiled." Writer/director Sofia Coppola ("Marie Antoinette") famously became only the second woman to win Best Director at Cannes for her adaptation of Thomas Cullinan's novel, first brought to the screen in 1971 by Don Siegel. It is wonderful to see female filmmakers honored, but one wonders just what the 2017 jury were smoking. Siegel's film was borderline camp, a hothouse Southern Gothic of simmering sexual tension, jealousy and madness. Coppola's made a pretty film, all pale pastels and Spanish moss, but it's too restrained, flat, Farrell, Kidman and Dunst's performances paling in comparison to those of Clint Eastwood, Geraldine Page and Elizabeth Hartman. The women quickly gather around McBurney, laying him on a settee in the music room, tending to his leg wound. Miss Farnsworth's (Kidman) initial decision to tie a blue rag to their gate signalling to their own soldiers the presence of an enemy is appealed by Amy, stating that it would be more Christian to turn him over once he's had a chance to heal. McBurney, an Irish mercenary, appraises the women, teenaged Alicia (Elle Fanning), and girls looking to ingratiate himself, Farnsworth's right hand woman, the demure Edwina Dabney (Kirsten Dunst), catching his eye. The maleness in their midst causes immediate reactions, young Amy proprietary about her friendship with the soldier, the older women taking greater care in their appearance. The guarded Farnsworth offers brandy for medicinal purposes, drawing back when McBurney derives too much pleasure in the idea, but she becomes chummier when he begins to help the women beat back their overgrown garden. The incorrigibly flirtatious Alicia dares to kiss him goodnight, but McBurney's set his sites on Edwina, secretly wooing her, plotting an escape. After McBurney fails to take advantage of Farnsworth's signals one evening, she declares he should be ready to leave by the end of the week as they work outdoors. McBurney angles for a job, Alicia steps up her game and Edwina makes a shocking discovery that sets the stage for criminal collusion. Coppola's film cannot be faulted for its production, cinematographer Philippe Le Sourd's ("The Grandmaster") shot-on-film mostly in natural daylight imagery striking, candlelit scenes intimate. Sound design smartly contrasts nature with the war raging nearby. Production designer Anne Ross ("Lost in Translation") has redressed a Louisiana Greek Revival to stand in for Farnsworth Seminary. Costume designer Stacey Battat ("Somewhere," "The Bling Ring") modifies the dress of the time for the circumstances these women find themselves in, small adornments and fancier clothes coming out for McBurney. But Coppola's feminine take is too genteel, her cast repressing their fluster. The much ballyhooed sponge bath scene, where Kidman bathes the unconscious Farrell, has no heat. Farrell and Dunst's sex scene comes across as male need rather than passion on either side. Fanning's flirtations are nonsensical, more those of a barroom hussy than a teenaged Southern belle. Farrell's just not dangerous enough. Speaking of danger, when two Confederate soldiers barge into the school there is none, a lost opportunity to suggest McBurney as protector, as Siegel's film did. Laurence, the second youngest member of the cast, delivers the strongest performance. The youngest, Addison Riecke (Nickelodeon's 'The Thundermans'), makes her mark with little involvement in the action (the film also stars "The Nice Guys's" Angourie Rice as the disapproving Jane and 'Transparents's' Emma Howard as Emily). Coppola's "The Beguiled" is weak tea served in a dainty china cup. Grade:

I took the time to watch the 1971 original of “The Beguiled” to refresh my memory (I realized that, for all these years, I had not seen the film in its entirety). I am glad that I did as it gave me something to base my opinion, by comparison, of the remake. The Clint Eastwood/Geraldine Page starrer is a steamy, Civil War, Southern antebellum sensual potboiler steeped in intrigues. Sophia Coppola, as director, writer and producer, adapts, as did the 1971 version, the Thomas P. Cullinan novel originally titled A Painted Devil. But where Don Siegel’s earlier film adopts the texture and details of the story, Sophia Coppola chooses to forego the details and glosses over some significant and dangerous events that the original graphically included. The characters in this new millennium version are all given definition so you get to know, on more or less equal levels (star-power notwithstanding), all of the players. Colin Farrell is more conniving than lusty as the injured Yank who plays the ladies off of each other. (I liked Eastwood much more.) Nicole Kidman lacks the just-below-the-surface boil that Geraldine Page gave as Miss Farnsworth. This is the problem I have with the new “The Beguiled” – it lacks lustiness. The young ladies at the school, especially Oona Laurence as the youngest, Amy, fare well enough. Kirsten Dunst, as the school’s teacher, Miss Edwina, is suitably naïve and starry-eyed for the deceitful McB’s plans. Elle Fanning, as the thrill-seeking, when it comes to their visitor, Alicia, seems more like a petulant modern teenager and out of the time of the film. The rest of the young ladies are Angourie Rice, Addison Riecke and Emma Howard. The production is sultry and fogged in diffused light and, overall, does look good on the screen. But, the fault, to paraphrase the Bard, is not in our stars, but in the script.