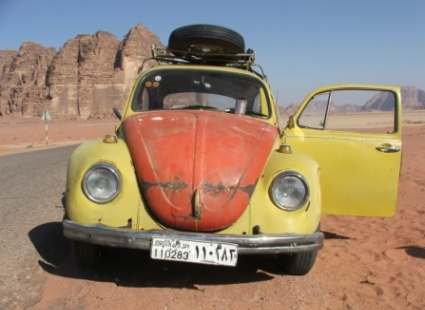 Yishai Orian loves his 40-year old VW Beetle but his very pregnant wife Eliraz wants to get rid of the old rattle trap for something more comfortable and baby-friendly. Yishai vacillates on making the ultimate decision to scrap his beloved Bug delays the decision by contacting the car’s previous owners in this documentary journal of one man’s quest to save “The Beetle.”

Yishai Orian leaves nothing to chance upon his wedding to Eliraz, scoring the glass to ensure it breaks when he stomps on it during the ceremony, but six years later when his wife is pregnant with their first child, Yishai seems to have lost that forethought as he focuses more on his beloved collectible car than the arrival of his firstborn. Eliraz, in turn, becomes more and more unhappy and comes to despise "The Beetle." This lively documentary follows its creator's obsession with his beloved car, a piece of history he's had since his college days which his wife views as an uncomfortable deathtrap. After establishing the family history (parents view the car as a youthful 'hippie' token, not a symbol of their married children's current professional lives), Yishai gives us the history of the VW car's genesis, ironic given its roots in Nazi Germany as 'the people's car.' Used as reparation to Israel in the 1950's, Israeli customs colluded to cover the truth, branding the little cars as made in Belgium. Then Orian begins a two-pronged quest - to prove the car is worth saving and to trace its personal history in order to sway Eliraz with sentiment. The car's very first owner, represented by his son, was a staunch boycotter of German goods and had left Israel and his car shortly after discovering its pedigree. The history going forward becomes more and more moving, with the car's last owners oddly connected to its present ones, but Eliraz is not moved and the word from Yishai's mechanic is not at all what he expected to hear - two cylinders are not working and the motor's about to go. Yishai tries to sell the car, but the best he can do is a couple of Arabic speaking scrap buyers. Understanding what they think is private conversation due to his years in the Army, Yishai learns the car can be overhauled relatively cheaply in Jordan and decides to travel there - within days of Eliraz's due date! "The Beetle" is obviously often contrived. When Orian takes the Beetle to a junkyard, we know he will relent when its turn for the crusher arrives. More drama surrounds the arrival of the baby as Yishai fights against time in Jordan. Nonetheless, "The Beetle" is not only entertaining, it's a unique look at a car that meant much to many, a vehicle that defined an era, even in Israel. Middle Eastern politics also come into play as Yishai's mother is convinced that he will be thought a spy if he videotapes in Jordan. On the contrary, he makes staunch friends there, not only in the mechanics who eventually work on his car, but in a little boy who teaches him how to make a kite (contrived and cliched, yes, but also a nice parallel to his imminent fatherhood). Orian also gets some amusing visuals when his city boy must rely on a herd of goats and a camel in the Jordanian desert.

This is an entertaining and original docufilm that wears its heart on its sleeve and shows the filmmaker’s love for his beat up old car. It is a mix of doing what is right for his family (get rid of the damn car!) and what is right in his heart. The director manufactures some scenes to make things work, but, overall, he gives us an empathetic story that anyone who has loved a “thing” will identify with. Photography, by Yair Sagi, and the striking Israeli/Jordanian locations ramp things up and mate well with Yishai Orian’s mini epic mission to restore his Beetle. “The Beetle” is an enjoyable little film that keeps a smile on your face from start to finish as Yishai strives to revive his aged car.