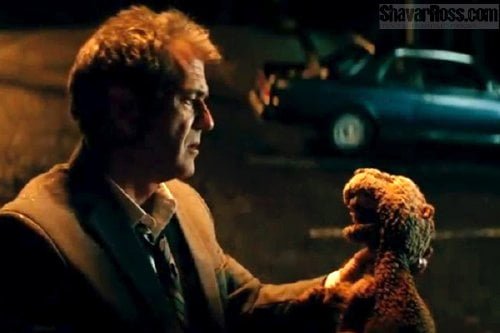 Walter Black (Mel Gibson) runs a successful toy company but the strain of responsibility and his own self doubt drive him into a bottomless pity of depression, estranging him from his wife, Meredith (Jody Foster) and their two children. In despair and isolated from any support mechanism, he drinks himself into a stupor and tries to commit suicide. He is saved and his life put back into order when he starts wearing a hand puppet called “The Beaver.”

Walter Black (Mel Gibson) is depressed, a British narrator tells us as we see the man literally flagellating himself. His wife Meredith (Jodie Foster) has tried everything, his elder son Porter (Anton Yelchin, "Star Trek") wants nothing to do with him. Walter moves into a motel and tries to commit suicide, cheering us up with the hilarity of the failure, but sending him into a tailspin. But when he hits the local liquor store, he finds something in the trash there that lifts him up, allowing him to communicate and function again, "The Beaver." Back when we first heard about it, the idea of a mentally ill Mel Gibson talking through a hand puppet sounded like the stuff of high comedy, but this first time script by Kyle Killen (TV's 'Lone Star') is really a family drama with a serious message about the reality of depression. Director Jodie Foster ("Little Man Tate") has been a steadfast supporter of her "Maverick" costar and friend throughout his travails and, in her hands, Gibson has allowed his own well known idiosyncrasies, such as his Catholic guilt and propensity for cinematic self-torture, to illustrate his character. "The Beaver" will be sure to draw a lot of curiosity seekers, but while Gibson gives an intricate performance, the film itself, especially visually, often feels flat. We soon learn that that earlier narrator is Walter's voice for his alter ego (which sounds much like his "Edge of Darkness" costar, Ray Winstone). The Beaver is met with a wide range of reactions. The first, the Blacks' young son Henry (Riley Thomas Stewart) immediately accepts a stuffed animal with a life of its own and even if dad doesn't speak, he's interacting and playing with him. Meredith is pleased to see this, but very wary of Walter's new sidekick, until she is assured that this is a treatment put into place by the psychiatrist we know Walter has not seen. The Beaver's presence in the marital bed when sexual relations resume is vaguely creepy. Porter remains unconvinced, dealing with his own identity issues as a high school senior who makes money writing other students' papers for a trip he plans to take. Back at work at the toy company Walter inherited as the family business, the Beaver is met with some skepticism, but then again, like with Walter's little boy, it makes a natural fit. In fact, the Beaver's play with Henry at dad's woodworking box becomes the seed for the next big must-have-toy and the firm's Vice President (Cherry Jones, '24's' last president), who's kept the firm afloat, finds herself rewarded by appearances on the Today Show with her boss. But when the Beaver treatment shows no sign of ending, Meredith begins to see the truth. She insists on her husband alone for a twentieth anniversary dinner and Walter is paralyzed, unable to function without the puppet. His backsliding mental state also affects his media popularity and Beaver Woodworking Kits begin to gather dust on store shelves. Meanwhile, Porter's subplot, in which he finds himself beginning a relationship with the school's hot valedictorian Norah (Jennifer Lawrence, "Winter's Bone") after she asks him to write her speech, is also becoming derailed when he attempts to make her face the tragedy in her life, the loss of a brother, and she withdraws angrily. This second story, which ends in a speech about accepting things we cannot change, doesn't work as well as Porter's attempts to wipe out any vestige of his father within himself (he notes similarities on post-it notes which cover his bedroom wall). When his dad, who has clearly benefited from interacting with his family again no matter how oddly, takes the only action he can think of to bring Walter back, Porter finally steps up and finds it within himself to reach out to his dad. The hereditary nature of the disease, the only thing besides the company Walter seems to have gotten from his father, is also reflected in Porter, who reacts to adverse situations with sleep. The film is to be commended for addressing depression, but while Gibson's performance is always fascinating, a dual acting job without benefit of a screen double, the film suffers its own malaise when he's not on screen. Foster's Meredith is fairly humorless, which, especially given the situations she is put into, makes her dull company. Cherry Jones is a one note cheerleader as the woman behind the man. Yelchin is a good young actor, but he has little spark with Lawrence. Foster purposefully had her film shot without a lot of deep focus against extremely neutral pallets (blue-grays and gray-greens), but instead of adding psychological depth, the film just looks drab.

Knowing the premise of “The Beaver,” I had not a clue what to expect in this third directorial outing for Jody Foster. Her first, “Little Man Tate,” was an assured helming debut and gave me hope for her second, “Home for the Holidays,” but that was a major stumble. It has been 16 years since Foster worked behind the camera and I hoped from something akin to the quality of her first and feared that she may repeat her last. Surprise! Jody and Mel did good. Working from the debut original feature screenplay by Kyle Killen, Jody Foster tells the story of one man gripped by overwhelming depression. Walter eschews conventional therapy in his battle and resorts to “home” remedies such as self-flagellation, hypnosis and drum playing. None work. For Meredith, though, this is the last straw and she throws him out of the house. Now all alone, Walter goes on a drinking binge and decides to commit suicide. Walter’s drunken attempt to do himself in by hanging himself in the shower of his motel room fails disastrously and he staggers around his room trailing the shower curtain rod from a tie knotted around his neck. As he tries to jump to his death from the balcony, the rod gets stuck and pulls him back hard. He falls and cracks his head, knocking himself unconscious. He awakens, some time later, facing a box of items to be discarded. Staring him in the face is The Beaver and the puppet starts to talk to him in a heavy English accent. At first, those around him think that it is all a joke. But, when Walter appears to get better, everyone begins to accept the talking surrogate, including Meredith. He goes back to his toy company and, with the help of T.B., rejuvenates the business, even marketing the Mr. Beaver Woodworker Kit for kids. It is a huge success and sales skyrocket. All appears to be going well for Walter but there is trouble on the horizon: Meredith. There are moments of dark, very dark, humor in “The Beaver,” but it really is a psychological drama about a man and his family coping with dad’s serious depression. A side story about Walter’s son, Porter (Anton Yelchin), a troubled teen, parallels Walter’s as the young man has to cope with his father’s neurosis and his own problems with self identity. The author of bootleg term papers, he is approached by smart, pretty cheerleader Norah (Jennifer Lawrence) who asks him to write her valedictory speech. She will have a cathartic effect on Porter and the young actors get their own place in “The Beaver.” Gibson gives a dynamic performance as a man confronting his inner demons only to have his “cure” explode in his face. The actor proves his worth, despite the bad publicity recently in the tabloids recently, and effectively gives a dual performance as the meek and confused Walter and the strong-will dominating The Beaver and balances the two. Jody Foster juggles directing acting and storytelling and is able to keep all the balls in the air on both sides of the camera. The younger stars, too, give nuanced performances, especially Jennifer Lawrence in her follow up to her Oscar nominated role in “Winter’s Bone.” She reaffirms her talent here. Production design, art direction, cinematography, editing, costume and the rest of the techs are well done without calling attention, making the look and feel of the film contemporary and real. It is a character study of depression and mental illness that does not preach and says a lot about the human spirit, even though the star is a beaver.