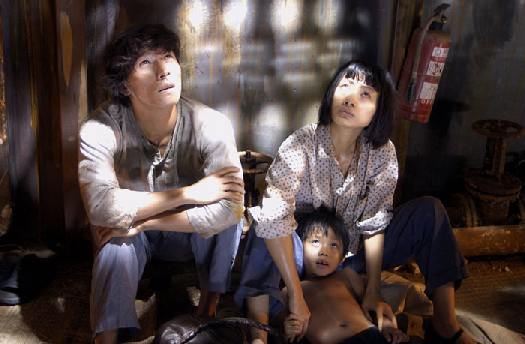 Bui doi,” Vietnamese for less than dust, is the slur given to the children of the American GI’s born during and after the Vietnam War. One of these children, Binh (Damien Nguyen), has grown up in a foster home where he is treated as a lowly servant instead of family member. He learns, after nearly 20 years in servitude, that his mother is alive and living in Saigon and packs his meager belongings to find her and, perhaps, his American father in “The Beautiful Country.”

The peace of Hoa Nam, a small Vietnamese village, is broken by more than Lene Lovich's "Lucky Number" screaming from a passing motorbike after Pham (Xuan Phuc Dins) asks for Binh's (newcomer Damien Nguyen) stepmother's hand in marriage. Binh is Bui Doi ('less than Dust'), regarded as ugly and outcast as the adult child of an American GI. He seeks out his natural mother Mai (Thi Kim Xuan Chau) in Saigon and a new dawn seems to break, but a tragic accident means Binh must go on the run with nothing but Mai's marriage certificate, meager savings and young son Tam (Dang Quoc Thinh Tran), headed towards his unknown father in "The Beautiful Country." Norwegian director Hans Petter Moland is perhaps best know for "Aberdeen," another film about a child travelling from the mother to reconnect with the father. But whereas that film was an intimate character drama confined to the Northern limits of Europe, this one is epic in scope, a film that recalls many with its episodes of dangerous boat travel, brutal refugee camps, indentured slavery and travel from the big cities of American to its remotest, rural reaches. Binh's reunion with Mai is warm and intense, his and her history not what he expected (she actually married his American father, who simply disappeared one day). But the reality of Saigon is another thing entirely. Mai's employer, Mrs. Hoa (Thu Anh), is a wealthy tyrant whose son's (Duc Thuan Khuong) unwanted advances resulted in young Tam. Mrs. Hoa's own nasty nature ironically causes her death, but Binh is sure to be blamed and must escape. With Houston as the goal, Mai sacrifices Tam to a better life in the U.S. with Binh. After a horrific boat journey, Binh and Tam are plunked into a hellish Malaysian refugee camp. Chingmy (Man-chat To, "Infernal Affairs") tells Binh that only through sexual favors, like those dished out by Ling (Bai Ling, "Sky Captain and the World of Tomorrow"), can money be made to get out. But Ling takes a liking to little Tam, then is oddly moved by the quiet Binh, so she arranges for passage to America - a journey Binh refuses to take without her. Once aboard the rusty trawler, Binh learns they need to sign up for indentured servitude or be tossed overboard by Snakehead (Temuera Morrison, "Star Wars: Episode III - Revenge of the Sith"). Captain Oh (Tim Roth, "The Musketeer," "Dark Water") advises Binh to sign. Another horrific journey draws Binh and Ling closer, but little Tam is lost to fever. On the shores of New York, they're greeted by garbage. Binh works as a messenger and a busboy in Chinatown (where he throws away enough food from three plates to feed all the people who were lost in passage) and suffers watching Ling pick up men in a sleazy karaoke bar. Ling observes that if Binh keeps sending all his wages to Mai, he'll never make it to Houston. Then, as if his hardships hadn't been peppered with enough irony, Binh discovers that as the Vietnamese son of an American GI he was entitled to free transport and repatriation. After a heart breaking parting from Ling, Binh hitchhikes his way to Houston where he eventually finds Steve (Nick Nolte, "Hulk," "Hotel Rwanda"), his father, in a most unexpected reunion. Screenwriter Sabina Murray maintains a beautiful symmetry throughout both the winding story and its smaller details. Binh's first job helping Mai at the Hoa house is to paint an iron gate which extends to Texas where Steve is a ranch hand with a peeling fence to tend to. When Binh discovers Mai, it is through Tam, the product of another parental union, just as it is Steve's American ex-wife (Libby Villari, "Boys Don't Cry," "Serving Sara") who eventually points him towards his father (in a beautiful touch, the filmmakers trick us by housing the ex-wife in a vision of the American dream). Even the film's title flips, as Mai describes the U.S., so does Steve describe Binh's home country. The stories' many ironies are also told visually - after a long day at work, Mai picks up Tam from the elderly, one-legged woman who minds him and carries him upstairs. Moments later, a young man does the same for the old babysitter. Tam's loss is foreshadowed on the first boat trip, a baby protected by its grandfather replaced in the next shot by its wailing mother. When conditions get dire on Captain Oh's ship and Tam pulls a wriggling maggot from his few tablespoons of rice, Ling advises him 'That's what Mickey Mouse eats,' perhaps foreshadowing her own future. Bai Ling is terrific as the jaded woman who is yet still able to be affected by a happy little boy and his steady, quiet caretaker. Damien Nguyen creates a sympathetic hero without heroics, a humble man who keeps seeking a place in a life that continually beats him down. His scenes with Nolte are ones of few words but tremendous emotion, an unspoken recognition that is extremely moving in its simplicity. Moland has done great work with his cast (the villains on either end are unfeeling capitalists, the ones in the middle, Roth in particular, grayer) and his great sprawling film. "The Beautiful Country" is the type of film that will make you wonder about the story behind the face of every immigrant in the street. It is a wrenching, ultimately touching human drama.

Tom (Romain Duris) is a real estate “developer” whose modus operandi has him planting live rats (and other vile things) in squatter apartment buildings to clear them out for speculators looking to buy low and sell high. But, a chance meeting with his long-dead concert pianist mother’s former manager rekindles a passion she gave him for the 88 ivories. Tom realizes he has come to a crossroad in his life and must decide between a life bordering on criminal or fulfilling his mother’s desire that he play in “The Beat That My Heart Skipped.” Character studies seem de rigueur of late in French cinema and “The Beat That My Heart Skipped,” a remake of James Toback’s 1978 directorial debut, “Fingers” with Harvey Keitel, is an effective one. Tom is an ambitious young man who is on the fast track to make a lot of money brokering his often-unsavory real estate deals with his partner Fabrice (Jonathan Zaccai). But, an unexpected encounter with Mr. Fox (Sandy Whitelaw), his mother’s manager until her untimely death, brings Tom the offer of an audition. Suddenly, a world long dormant is awakened in Tom and the chance to play the piano becomes real. Tom’s character, once the creative spark becomes rekindled, is thrust into metamorphosis as the artistic passion instilled by his mother comes into conflict with the reality and violence of his more recent vocation. These two sides are represented by the ingrained influence of his concert pianist mother and his shady speculator father, Robert (Niels Arestrup), whose often-violent footsteps he followed for the last decade. The contrast between Tom’s two worlds is about as different as possible. The shady real estate deals that are his bread and butter get pushed into back seat as Tom brings to the surface the concert pianist world grew up in. But, as he tries to transit back to the older, happier world that he knew as a youngster, his real, nasty world keeps intruding itself, despite his efforts to get out of the dark side of shady real estate deals. Tom’s resolve to change his life, for the better, is aided when he hires a pretty Vietnamese piano teacher, Miao-Lin (Linh-Dam Phan), to evaluate his playing skill and train him for the upcoming audition. Tom, whose life has existed in the shadows of his mostly nocturnal doings, is thrust into the light as his teacher, a hard taskmaster, drives him to unleash the creative talent within. What started as merely a business deal slowly turns into one of shared passion for the piano, a passion that will emotionally bond them. But, just when Tom is on the verge of changing his life, he is pulled back into his shady world. The Beat That My Heart Skipped” is a complex tale that goes beyond Tom’s having to choose which path to follow. There is also the father-son relationship between Tom and Robert that, as the father gets older and less effective, turns their roles around. Then, there is the undercurrent of revenge regarding Robert that I won’t delve into, lest I spoil the story. And, there is his role as his partner’s beard as Fabrice uses Tom to cover up his numerous infidelities that, in turn, push Tom into the arms of Fabrice’s wife, Aline (Aure Atika). With so many things going on, you won’t be board. Camera, by Stephane Fontaine, is kept closely aligned with Tom, giving the character’s point of view of events unfolding around him. Music, which pivots on Bach’s Toccata in E minor (Tom’s audition piece), is effectively used to show the young man as a dedicated, almost fanatical, student but one that foregoes the heart of music in favor of it’s technical perfection. What this does to Tom, in the end, turns out to be a pleasant surprise. Director Jacques Audiard, who co-wrote the adapted screenplay with Tonino Benacquista, keeps his focus on Tom but does not short shrift the supporting characters. He packs a lot of story into 107 minutes and does it deftly. “The Beat That My Heart Skipped” may be rooted in Toback’s 1978 film but Audiard makes it a modern parable that befits the new millennium.