The Beatles: Eight Days a Week – The Touring Years 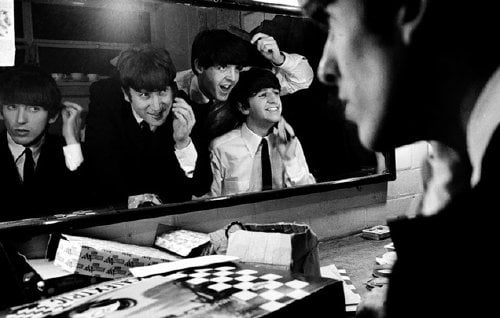 From 1962 through 1966, four young men from Liverpool lived in the equivalent of a glass cage, their stunning success producing a global mass hysteria never seen before or since. Director Ron Howard immerses us in the madness with them, an insanity they traveled through with amazing grace and biting wit until it all finally became too much in "The Beatles: Eight Days a Week - The Touring Years."

Think you've seen all there is to see on the Beatles from that endearingly irreverent press conference after their U.S. arrival to the Ed Sullivan Show to the fans screaming so loudly during concerts one couldn't hear the music? Think again. While Ron Howard made this film for millennials that were introduced to The Beatles after the fact, the surprising thing is that the baby boomers who grew up with them will unearth new bits and bobs about the band as well. (My favorite bit? George tapping his cigarette ash onto the top of an unsuspecting John Lennon's head during an interview - the cheek.) Working with writer Mark Monroe ("The Cove"), Howard also reminds us of the band's historical impact, their arrival on the world stage helping to shape a generation just as teenagers became a majority force in the population, rock's first ever world tour a unifying cultural moment , even ending segregated concerts in the U.S. Howard's primary objective was to enable his audience to feel what it was like to be at a live Beatles show. A project to collect fan footage unearthed such treasures as a a San Franciscan's Super 8 footage of the band walking out onto the field at Candlestick Park for their last performance. We see them performing in Manchester, UK on a small wooden stage, a very young Sigourney Weaver swooning in the Hollywood Bowl and the riotous reception in Tokyo where their performance at Budokan Hall was deemed sacrilegious by many. There are the hysterical fans - in both senses of the word ('George has sexy eyelashes!' insists one). Liverpool's football stadium, packed to the rafters with sports fans, is the stage for a singalong to 'She Loves You.' Whoopi Goldberg relates how her mother surprised her with tickets to their Shea Stadium performance. Historian Dr. Kitty Oliver recounts being surrounded by white people for the first time and feeling a sense of togetherness through the music at the band's Gator Bowl show. We also get a new look at the inside of those years, Ringo outlining the demands of 'something wanted every minute of the day.' (Ringo and Paul were interviewed for the film while sharp research provided complementary archival commentary from John and George.) There are outtakes from Albert and David Maysles' 1964 doc 'What's Happening!' Miami radio journalist Larry Kane, who asked for an interview only to be invited on both U.S. tours, thought he had more important things to cover only to be amazed by what he saw. We hear about the legendary roadies and the now-laughable technical solutions to unanticipated issues. (The one thing we do not get is backstage scandal, Howard's squeaky clean take sidestepping groupies, the most outrageous bit Kane stating the boys who came back to the U.S. a second time appeared to be stoned.) Although technically it doesn't fit his title, Howard wisely steps into the studio, illustrating how the end of touring sparked more innovation. He wraps with that wondrous rooftop concert at Apple Headquarters. If you go out of your way to see this in the theater (versus streaming on Hulu), you'll also be treated to a restored thirty minute edit of the Shea Stadium concert. Sound mixer Chris Jenkins ("Mad Max: Fury Road") has done a remarkable job boosting and sharpening the audio of the performance while cutting back on the crowd noise. Whether you know a little or a lot about the Beatles, "Eight Days a Week - The Touring Years" does a great job reminding us just why this band was so special. Grade: