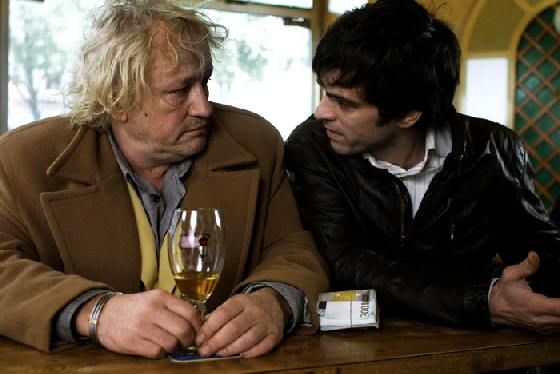 Twenty-eight year old Thomas Seyer (Romain Duris, "L'Auberge espagnole," "Le Divorce") has been following in the footsteps of his beloved father Robert (Niels Arestrup, "Meeting Venus") by illegally hustling real estate with brutish methods when a chance run-in with his deceased mom's concert manager puts him at a crossroads. While the violence of his dad's world clearly turns him on, macho brutality is pitted against the artistic and refined when Tom discovers reconnecting with the world of his concert pianist mother truly jazzes him in "The Beat That My Heart Skipped."

Cowriter (with "Read My Lips" collaborator Tonino Benacquista)/director Jacques Audiard has made an unconventional move in remaking an American film. James Toback's debut film, 1978's "Fingers," is a cult item whose protagonist, Harvey Keitel, suffers a more violent end than Audiard's hero. Audiard has taken Toback's premise and created an offbeat character study of a man whose parents, one living and one deceased, are engaged in a virtual tug-of-war over his future. Duris gives a star-making turn as the intense, hip, jangly edged thug with the soul of an artist. The film disorients at first as we're thrown into Tom's world where he and his mates Fabrice (Jonathan Zaccaï, "Bord de mer") and Sami (Gilles Cohen, "Kings and Queen") are acquiring real estate by brutalizing tenants and planting live rats. When a Family Housing Rights group moves in to protect squatters in another building, Tom sends in a crew to smash windows, and when dad's renters are late, Tom takes on collection duties directly. After Mr. Fox suggests Tom audition, his mother's spirit immediately begins to take hold. Robert introduces Tom to his new fiancee Chris (Emmanuelle Devos, "Read My Lips," "Kings and Queen") and Tom treats her rudely, telling dad privately that she's a whore. A professional recording conductor derides Tom's grandiose ideas given his lack of experience, so Tom finds a coach, Miao Lin (Linh Dan Pham, "Indochine"), a recent Chinese emigre who speaks no French. A long repressed mutual attraction with Fabrice's wife Aline (Aure Atika, "Blame It on Voltaire") blossoms into a mature affair when Aline discovers Tom's been fronting for Fabrice's cheating. Tom retreats more and more from the violence that has defined his life, but dad calls a favor one last time when he's cheated out of a large investment by a Russian gangster. It turns out that Minskov (Anton Yakovlev), like Miao Lin, speaks no French, suggesting Tom's alienated state between the two worlds he exists in. If Minskov will always be tied with Tom's father, Miao Lin is more than representative of his mother as she is the character most associated with Tom's transition. Tom is impatient and rude initially, but comes to respect her calm and knowledge, teaching her French in return. Duris is terrific in the role, all shifty smirks and grins and quicksilver facial expressions, physically showing how his violent tendencies are at odds with his ability to play piano and how Miao Lin smooths out his edges. Niels Arestrup provides the film's other indelible character, suggesting a cross between a 70's era Marlon Brando and Richard Harris. Costume designer Virginie Montel ("Après Vous") makes strong contributions to both, outfitting Duris in black leather and Beatle boots while Arestrup wears a jacket the same color as his flowing white-yellow hair. The film looks brilliant (cinematography by Stéphane Fontaine,"Look at Me"), with the rich inky blacks of night contrasted with neons to the light, brighter world of daytime music. Sound and dialogue are as creatively edited as the film, conjuring up Tom's interior world in a club scene. Composer Alexandre Desplat ("Girl With a Pearl Earring," "Birth") won a Silver Bear at the 2005 Berlin Fest for his longing violin score.

Tom (Romain Duris) is a real estate “developer” whose modus operandi has him planting live rats (and other vile things) in squatter apartment buildings to clear them out for speculators looking to buy low and sell high. But, a chance meeting with his long-dead concert pianist mother’s former manager rekindles a passion she gave him for the 88 ivories. Tom realizes he has come to a crossroad in his life and must decide between a life bordering on criminal or fulfilling his mother’s desire that he play in “The Beat That My Heart Skipped.” Character studies seem de rigueur of late in French cinema and “The Beat That My Heart Skipped,” a remake of James Toback’s 1978 directorial debut, “Fingers” with Harvey Keitel, is an effective one. Tom is an ambitious young man who is on the fast track to make a lot of money brokering his often-unsavory real estate deals with his partner Fabrice (Jonathan Zaccai). But, an unexpected encounter with Mr. Fox (Sandy Whitelaw), his mother’s manager until her untimely death, brings Tom the offer of an audition. Suddenly, a world long dormant is awakened in Tom and the chance to play the piano becomes real. Tom’s character, once the creative spark becomes rekindled, is thrust into metamorphosis as the artistic passion instilled by his mother comes into conflict with the reality and violence of his more recent vocation. These two sides are represented by the ingrained influence of his concert pianist mother and his shady speculator father, Robert (Niels Arestrup), whose often-violent footsteps he followed for the last decade. The contrast between Tom’s two worlds is about as different as possible. The shady real estate deals that are his bread and butter get pushed into back seat as Tom brings to the surface the concert pianist world grew up in. But, as he tries to transit back to the older, happier world that he knew as a youngster, his real, nasty world keeps intruding itself, despite his efforts to get out of the dark side of shady real estate deals. Tom’s resolve to change his life, for the better, is aided when he hires a pretty Vietnamese piano teacher, Miao-Lin (Linh-Dam Phan), to evaluate his playing skill and train him for the upcoming audition. Tom, whose life has existed in the shadows of his mostly nocturnal doings, is thrust into the light as his teacher, a hard taskmaster, drives him to unleash the creative talent within. What started as merely a business deal slowly turns into one of shared passion for the piano, a passion that will emotionally bond them. But, just when Tom is on the verge of changing his life, he is pulled back into his shady world. The Beat That My Heart Skipped” is a complex tale that goes beyond Tom’s having to choose which path to follow. There is also the father-son relationship between Tom and Robert that, as the father gets older and less effective, turns their roles around. Then, there is the undercurrent of revenge regarding Robert that I won’t delve into, lest I spoil the story. And, there is his role as his partner’s beard as Fabrice uses Tom to cover up his numerous infidelities that, in turn, push Tom into the arms of Fabrice’s wife, Aline (Aure Atika). With so many things going on, you won’t be board. Camera, by Stephane Fontaine, is kept closely aligned with Tom, giving the character’s point of view of events unfolding around him. Music, which pivots on Bach’s Toccata in E minor (Tom’s audition piece), is effectively used to show the young man as a dedicated, almost fanatical, student but one that foregoes the heart of music in favor of it’s technical perfection. What this does to Tom, in the end, turns out to be a pleasant surprise. Director Jacques Audiard, who co-wrote the adapted screenplay with Tonino Benacquista, keeps his focus on Tom but does not short shrift the supporting characters. He packs a lot of story into 107 minutes and does it deftly. “The Beat That My Heart Skipped” may be rooted in Toback’s 1978 film but Audiard makes it a modern parable that befits the new millennium.