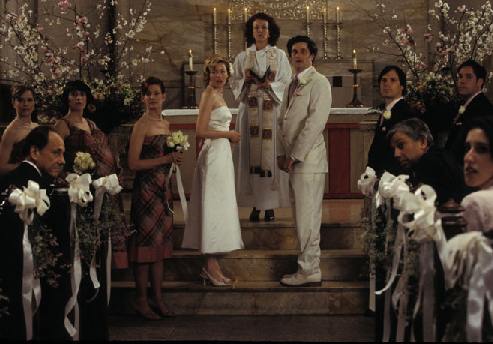 Elliot Sherman (writer/director/star Michael Showalter, "Wet Hot American Summer") is a tax accounting whiz who thinks his life is on track - he has a good job, well located New York City apartment and is engaged to the beautiful Caroline Swan (Elizabeth Banks, "The 40 Year-Old Virgin"). But when Caroline's high school sweetheart, millionaire scientist-adventurer Bradley (Justin Theroux, "Mulholland Drive") breezes back into town, Elliot looks fated to become what he has always been - "The Baxter."

According to Elliot's grandmother, a Baxter is the guy who gets left standing at the altar, the nice guy someone has settled for. It also happens to be the name of Jack Lemmon's character in Billy Wilder's "The Apartment." C.C. Baxter sucked up to insurance executives by letting them use his apartment for romantic trysts and only falls into his own romance when he comes to the rescue of one of their mistresses. Is it any coincidence that the woman under Elliot Sherman's nose, the one who is so obviously right for him, resembles Shirley MacLaine's Miss Kubelik? (She recalls Annie Hall later on as well, singing with a weak, wavery voice in a New York club - Showalter's incorporated a lot of his homework.) Character similarities aside, however, "The Baxter" is not "The Apartment" but an upending of the typical romantic comedy formula that Showalter has filtered through his own brand of offbeat humor. This is a film where everyone, be they socially inept misfits like Elliot, WASPs like Caroline, guy's guys like best buddy Ed (Michael Ian Black, "Wet Hot American Summer"), hip guys like Dan (Paul Rudd, "The 40 Year-Old Virgin") or Bradley's sexy, rich geologist jet-setter, all come from the same dork pool. Elliot and his cowoworkers don't see the dorkiness the audience sees, they just see how these other groups act like they belong to different species and that's "The Baxter's" primary joke. (Watch how A.D. Miles as one of Elliot's accounting herd is awed by Dan's barroom lingo slinging ('Let's pull up some real estate') even though Rudd is playing it as geeky as he is.) There are two exceptions. Peter Dinklage ("The Station Agent," "Elf") as a trendy wedding planner recognizes weirdness outside of his own rarified pigeonhole when he sees it. More importantly, Michelle Williams ("The Station Agent") as Cecil Mills, the temp from Fergus Falls, Minnesota, is this film's sweetly real Fran Kubelik stand-in, a girl who doesn't act like anything else but what she is. Even though he is presumably doing the same, Showalter doesn't achieve the naturalness that Williams does and the character, as written, doesn't draw much empathy because of the obvious poor choice he's made. In fact, even though we are supposed to be seeing the romantic comedy turned inside out, it's just the same old pattern with the 'wrong person' not being left behind as a Baxter. Showalter's writing can and does sparkle occasionally, though. Elliot bonds with Cecil the temp's over the fact that they are both reading the dictionary (she particularly likes the word gromwell), before he's bowled over by the arrival of Caroline Swan who tries to make a similar connection over her daily jogs and his power walking. Elliot's choice of wedding colors, yellow and black, are rebuffed by his horrified fiancee who prefers 'tuscan white bean and steamed asparagus,' and the pre-wedding dinner hosted by his parents which only he attends is all the more hilarious for their being so unlike him. But while the debuting director handily stages slapstick farce, uncomfortable moments and geek love, he isn't capable of achieving a consistent tone throughout his film, something which is reflected in his performance as well. If there is one real treasure to be found in "The Baxter," it is in Justin Theroux's inspired parody of Sebastian Junger, the handsome, best-selling author romantically drawn to danger. With his little patch of upflipped hair curling over his woolen cap, outfitted to scale a wall or live in the rough at a moment's notice, Theroux tweaks the image of the humanitarian adventurer by laying bare his emotions in the most self-serving of ways. Theroux is laugh-out-loud funny whenever he's on screen. Also notable is David Wain ("Wet Hot American Summer") as Elliot's brother-in-law to be Louis Lewis, a man talented in stopping conversations dead in their tracks with his inappropriate observations. "The Baxter" is an amusing little trifle, but as a filmmaker Showalter isn't yet strong enough to overcome the genre he's attempting to invert.

Elliot Sherman (Michael Showalter) is a single, thirty-something accountant and has always been a loser with the ladies. In high school, college and business school he constantly lost the girl of the moment to another. But, when he unexpectedly woes his client, Caroline (Elizabeth Banks), and she agrees to marry him, Elliot finally believes he is no longer The Baxter.” What’s a “Baxter,” you ask? Remember at the end of The Graduate” when Dustin Hoffman steals Katherine Ross just as she is about to tie the knot? Well, the guy left standing there holding the wedding ring is a Baxter. Elliot Sherman has, for years, worn that title until Catherine comes into his life. Now, with their marriage vows only a couple of weeks away, he is sure that he will, once and forever, shed the stigma that has plagued him for so many years. Of course, if things go right for Elliot then there is no story and things end right here. Two things happen that will both reinforce his existence and change it permanently. A kindred spirit, Cecile (Michelle Williams), takes a temp job working for Elliot. She is a nice, plain young woman who has a passion for singing and reading the dictionary – the latter a love that Elliot shares. And, just weeks before the wedding, Caroline’s old high school flame, Bradley (Justin Theroux), suddenly appears on the scene. He is a scientist, enjoys helping the elderly and is that rare thing, a sensitive man. And, he still carries a torch for Catherine. Suddenly, Elliot’s status as the Baxter appears to be permanent. Director-scribe-star Michael Showalter makes his feature film debut with a work that is often amusing but carries a plot that is forced and not very realistic. There is a made-for-each-other quality when Elliot first meets Cecile. This bit of fate is quickly buried when beautiful, rich Catherine arrives at his accounting firm and, in an implausible bit of pairing, is swept off her feet by the dweebie bean counter. This near impossible romance, and the obvious attraction between Elliot and Cecile, makes suspension of disbelief a requirement for “The Baxter.” The obvious manufacture of Showalter’s screenplay and the mostly shallowly drawn characters are offset by one thing. Justin Theroux gives a tour-de-force comedic performance as that oxymoron: a sensitive guy. The tears well up in his soulful eyes at the drop of a hat and he readily rekindles his teenage romance with Caroline. You know, early on, the outcome of “The Baxter,” but Theroux, with a first-rate comedic performance, helps sustain your interest. Michael Showalter, one of the creative trio on the TV comedy series, “Stella,” doesn’t make much of a splash the first time in the pool in his multi-hyphenate role. Perhaps casting a more plausible lead for Elliot or writing a script that doesn’t have you scratching your head would have improved things. Justin Theroux’s performance as Bradley is nearly worth the price of admission, though.