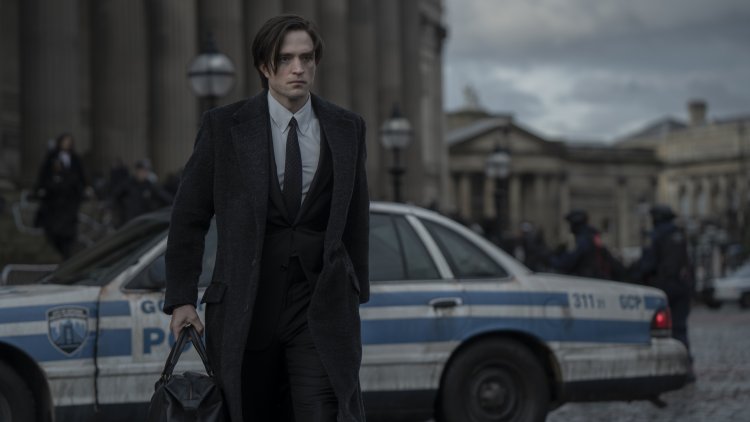 We are viewing a masked figure brandishing a sword by someone breathing heavily from behind another mask at a vantage point across the street.  He watches a man in a suit enter and be attacked.  Then a woman enters and takes the sword bearer by the hand and the suited man rises.  It is Halloween and after Gotham City’s Mayor Don Mitchell Jr’s (Rupert Penry-Jones, "Matchpoint") wife and son leave the room, the watcher, now standing behind him, strikes with a blunt object.  Commissioner James Gordon (Jeffrey Wright) will face pushback from his fellow cops when he enters the crime scene with a caped vigilante but the perp has left a riddle for “The Batman.”

It seems we get the Batman movie for our times, the first campy and cartoony Adam West iteration arriving during the pop-art culture of the 1960’s. The material Me Decade ended in 1989 with Tim Burton’s starry bauble.  Christopher Nolan’s Dark Knight Trilogy occurred after 9/11, during the Iraq War.  And so now, in 2022, we get the darkest Batman yet, one that pictures a Gotham City so drenched in corruption, billionaire Bruce Wayne (Robert Pattinson) finds himself looking into his own family history.  By the film’s end, parallels to today’s violent extremists and resistance against them are hard to deny.  This darkness is also reflected in the influence of such films as “The Crow” and “Saw.”

Cowriter (with "The Town's" Peter Craig)/director Matt Reeves, the 2nd director to take on both the Caped Crusader and "The Planet of the Apes," forgoes an origin story, instead reflecting it within that first victim whose young son (Archie Barnes) will be observed by The Batman throughout.  This is a richly plotted film, one which utilizes Catwoman (Zoë Kravitz, "Kimi") as a link between The Batman’s world and the deeply embedded corruption The Riddler (Paul Dano, in a role thankfully exited by Jonah Hill) is targeting with a series of gruesome murders all labeled ‘No more lies!’ as he feeds clues to the man in black he thinks is on his side.

In another brilliant stroke, The Penguin (an unrecognizable Colin Ferrell, whose makeup appears the natural result of unlucky genes and bad facial scarring) runs an underground club where Selena Kyle works and where she’s trying to uncover just what happened to her lover Annika (Hana Hrzic), an investigation that will dovetail with The Batman’s own in more ways than one.  In this film, when Commissioner Gordon, who may be the only honest man within Gotham City’s police force and in constant danger because of this, sends the bat signal, it’s as much a warning as call to action.

The world created here is dark and dreary, Reeves choosing Nirvana’s ‘Something in the Way’ as the film’s signature song.  Music by Michael Giacchino ("Up") is somber and foreboding, swirling constantly downward.  James Chinlund's ("War for the Planet of the Apes") production design leans a little too heavily into the Gothic, Wayne Manor appearing more like a 17th century cathedral than a billionaire’s mansion, but the rain soaked city and dingy 44 Below club fit the bill (kudos to the early in-joke that is the Good Times Grocer).  The city’s addicts, known as ‘drop heads,’ are creepily rendered on Halloween with the teardrop heads that denote the drug.  "Dune" director of photography Greig Fraser features one scene in pitch black darkness, the action sporadically lit by blasts of gunfire, a weapon Batman is staunchly opposed to using.

This Batman wears Doc Martens, his eyes lined in kohl to complement his cowl, his suit a bit bulky, the better to glide with (if not land well).  The Batmobile is a super-charged 70’s era muscle car.  Befitting this crusader’s detective skills, he’s got new gadgets in contact lenses which record what he, or in one case Selena, sees.  Selena switches her appearance throughout with variously colored and styled wigs, her Catwoman garb sleeker than Batman’s, her thigh-high lace-up patent leather boots her style signature.

While “The Batman” avoids much of the usual usual of Superhero films, it does fall into the trap of a somewhat bloated ending, even as it reveals a chillingly relevant turn.  It is notable that the Gotham City left to rebuild itself is doing so under the leadership of its newly elected mayor, Bella Reál (Jayme Lawson, "Farewell Amor"), a Black woman.

I am quite vocal about being a non-fan of the DC and MC Universe movies but, I have to tell you, I thoroughly enjoyed Matt Reeves and company’s spin on the latest entry into the world of “The Batman,”

I girded my loins for sitting through what I knew to be a nearly three-hour, giant budget, F/X-laden effort to spark the franchise once again. To my surprise, I had fun, in a darkly-minded way, watching the crime-fighter in his tormented, angst-ridden early days as the foe of crime.
What I think works best in this edition to the legend is that the concentration is on The Batman and not so much on Bruce Wayne – who is actually a big stick in the mud in Gotham’s society circles. This means we get to see more action and have less talking and allows us to marvel (no pun intended) at the film’s retro look and feel.

The screenplay by Peter Craig is more along the lines of the early comic books and less an extension of the long-running franchise. The film gets a good retro look that fits the story – as most of us know it – giving the proceed a dark and brooding look and feel.

Warner Brothers releases “The Batman” in theaters on 3/4/22.