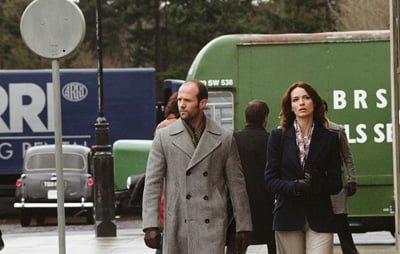 Terry Leather (Jason Statham) is an upright (sort of) citizen who just wants a break for him, his little family and his friends. When a pretty model friend from the old ‘hood tells him about a foolproof plan to rob a bank and net millions in cash and jewelry, he sees that the heist is just the break he and his mates need (or, is it?) in “The Bank Job.”

This is another of those based-on-a-true-story tales that again shows that fact, once again, is stranger than fiction. This is a wonderfully complex “Job” that starts out with sultry Martine (Saphron Burrows) telling her lover, Tim Everett (Richard Lintern) that she knows a group of villains that can help him (he works for Britain’s MI5) steal some incriminating photos involving a member of the royal family from the safe deposit vault at a local bank. Enter Terry and his mates. It is 1971 and money is tight, even for blokes who see nothing wrong with bending the law a bit to make ends meet. Martine gets in touch with Terry and proposes that he and his gang take on the foolproof robbery and collect millions, setting them up for life. Though a rat is smelled, the payoff outweighs the risk and the team comes up with a plan – tunnel under the bank, whose security system is offline, clean out the safe deposit boxes, then split to parts unknown. The Bank Job” has a huge ensemble cast led by Jason Statham in a role decidedly different (and refreshing) from his usual adrenaline-charged fare like “The Transporter” and “Crank.” At the start, we see Terry and his mates as the villains but, as events unfold, it is obvious that the villainy is really found at the highest level of British intelligence but also with corrupt cops, unscrupulous businessmen and gangsters that make our erstwhile bank robbers seem like a Sunday school class. The story by Dick Clement and Ian La Frenais takes the real-life events of this almost unknown bank heist and, with its many layers of cloak and dagger and intrigue, could have been confusing but skirts this with practiced ease by all the players. The intricacy of the plot, which runs the gamut with royal scandal, a radical revolutionary named Michael X, an incriminating journal with police payoffs listed in detail and, don’t forget, Terry and his pirates pulling of the big job. Techs are solid all around with veteran helmer Roger Donaldson giving his huge and talented cast a quality behind-the-camera crew that does a fine job in capturing the period feel (though the vintage cars looked a bit too pristine) in telling this fascinating story.