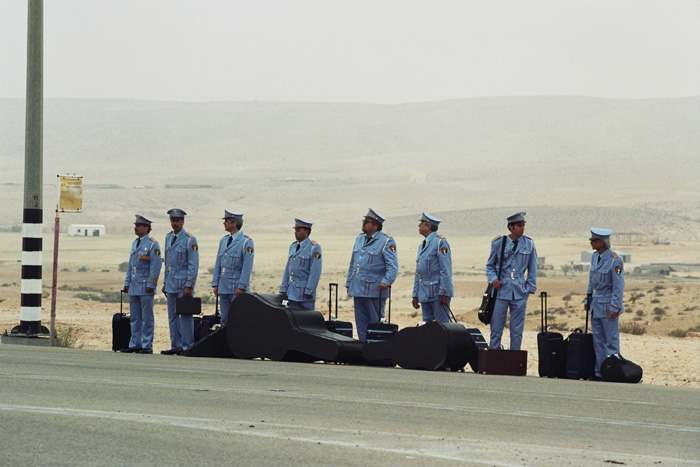 Once, not long ago, a small Egyptian police band arrived in Israel. Not many remember this, it was not that important.” Thus begins the charming, fish-out-of-water tale by first time helmer/scribe Eran Kolirin about “The Band’s Visit.”

The Alexandria Police Ceremonial Orchestra arrived in Israel to perform at the inauguration of the Arab Cultural Center, but no one is there to meet them. Their leader, Lt.-Col. Tawfiq Zacharya (Sasson Gabai), refuses to call the Egyptian Embassy for help. Instead, his stubborn refusal prompts them to find their own way to their destination. They end up in a tiny Israeli town in the middle of nowhere where absolutely nothing goes on. That is, until they meet feisty, friendly Dina (Ronit Elkabetz), the owner of what appears to be the only restaurant in town and they communicate in the only language common between them: English. When Tawfiq, hat in hand, humbly asks if Dina will feed them, her wry response is “Why not? This is a restaurant.” The band has no transportation and must wait for the next bus, which is not due until the next morning. Dina and others in town volunteer to find them a place for the night, against the colonel’s protestations, and the band must divide up to bed down. Tawfiq and Khaled (Saleh Bakri) end up at Dina’s home and the rest are parceled to others around town. Each of the musicians has a different experience in this land, some good, some not so good, but strange and unexpected nonetheless. This is where “The Band’s Visit” finds its charm, particularly in the dynamics between Dina, Tawfiq and Khaled. There is a nice chemistry between Dina and Tawfiq when she takes him out to see the town, what there is of it, and the two share the intimacies of their lives - their wants, desires and failings. At one point, she surprises him with the revelation that Israeli’s LOVE Egyptian movies and, when she was young, the streets would empty on Friday afternoon so everyone could watch them. Khaled has a quite different evening when he decides to go out with a few of the locals to a roller-skating rink, one of whom is a shy young man smitten but tongue-tied with one of their companions, an unhappy young woman. In a funny, lovely sequence, Khaled guides him, almost robotically, to overcome his reticence and hopefully find love – it is a static three shot nicely framed by cinematographer Shai Goldman. Other bits of the band’s stories are mildly amusing but are not given the shrift the above threads get. This is understandable given the film’s compact under 84-minute run time. Music, as one would guess, plays a key part in giving The Band’s Visit” its wholeness. The original music by Habib Shadah nicely compliments the many familiar pop tunes, including such classics as George Gershwin’s “Summertime” and Richard Rodgers’s “My Funny Valentine.” This is a varied and entertaining film that is satisfying and heartfelt.