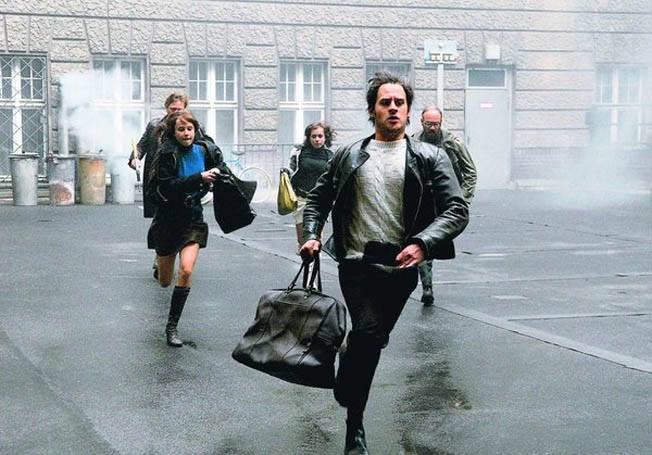 'If you throw one stone, it’s a punishable offence. If one thousand stones are thrown, it’s political action.' Ulrike Meinhof

In 1967, publisher Klaus-Rainer Röhl (Hans Werner Meyer, "Safe Conduct") was proud of his young wife Ulrike 'Ricky' Meinhof (Martina Gedeck, "Mostly Martha," "The Lives of Others") who was the mother of his children and a Communist journalist who condemned Capitalism, Imperialism and Fascism from a human rights perspective. After cheating on his wife, Klaus may not have been surprised when she took their twins and left him, but he probably never imagined that she would go down in history as one of the cofounders of "The Baader Meinhof Complex." Well, make that 'Gang,' but as a comment on the film 'Complex' is more accurate. In charting the rise and fall of the Red Army Faction (RAF) over ten years and two generations, cowriter/ producer Bernd Eichinger, who gave such depth to a much shorter historical period in "Downfall," here eventually loses his audience by refusing to streamline his cast and focus on a few significant events. It's a 10 part miniseries stuffed into a feature film. That said, there is much to admire about "The Baader Meinhof Complex," beginning with the depiction of the 2 June 1967 protests against the Shah of Iran at the Berlin Opera House. As directed by Uli Edel ("Last Exit to Brooklyn," "The Little Vampire"), we too feel the surging outrage as the Shah's security forces and German police employ excessive violence against the peaceful student protesters. It's utter chaos and just as I was writing "makes Kent State look mild," on my notepad, Edel depicts the shooting of Benno Ohnesorg, a student attending his first rally, in the head. This is the spark that turns protest into armed resistance. Fanning the fires is the attempted assassination of student leader Rudi Dutschke (Sebastian Blomberg, "Go for Zucker!"), another event depicted with breathtaking immediacy. Meinhof's written word connects her with Andreas Baader (Moritz Bleibtreu, "Run Lola Run," "Munich") and Gudrun Ensslin (Johanna Wokalek, "Aimee & Jaguar"), who have been protesting the VietNam War by torching empty department stores, and the filmmakers make a strong case that Ensslin was the real leader of the gang. More intellectual than Baader and far tougher than Meinhof, Ensslin is a force to be reckoned with, even as she responds to Baader's 'Baby's.' As depicted here, though, Baader is a hothead with a romanticized idea of the rebel and when the threesome take their gang to Jordan, we begin to see the cracks in their armor. Heady with the movements of their time, they show no respect for the Jordanian way of life and no discipline for training. Meinhof's role in the bombing of the Springer newspaper offices, in which multiple bomb threats were called in in an attempt to save employees lives, but ignored, is derided as 'counterrevolutionary' by Gudrun, but why? What is clear is that the Baader Meinhof Gang is one of the most ironically named terrorist groups in history as Baader and Meinhof were coming from very different places. After Meinhof, Baader and Ensslin are imprisoned and put on a raucous and divisive trial, events escalate with kidnappings (Hanns Martin Schleyer, an industrialist with former ties to the Nazi party played by Bernd Stegemann of "Go for Zucker!"), assassinations (banker Jürgen Ponto, (Hubert Mulzer, "Fay Grimm"), betrayed by his own goddaughter) and the hijacking of Lufthansa Flight 181 with a second generation that is thrown at us so fast and furiously they barely register. The exceptions are Brigitte Mohnhaupt (Nadja Uhl, "Cherry Blossoms"), who together with former juvie runaway Peter-Jürgen Boock (Vinzenz Kiefer, "Speed Racer"), who plot with the Palestinians to free the imprisoned RAF members, but a great example of the former is the casting of one of the film's most internationally recognized actresses, Alexandra Maria Lara ("Downfall," "Control"), as Petra Schelm, whom I only recognized mere seconds before she is gunned down by police. Even in the earlier stages of the film, such characters as Peter Homann (Jan Josef Liefers), Meinhof's new romantic partner, suddenly appears only to be denounced as an Israeli spy (why? because he wanted to leave the RAF to care for Meinhof's twin girls?) by Ensslin. The film does feature some exceptional performances, most notably from Gedeck as the mousy, Tina Fey-ish journalist who sacrifices her children to the cause with great regret and Wokalek, who considers the loss of her son a necessary fallout. The great Bruno Ganz ("Downfall," "The Reader") is Horst Herold, the director of the German Federal Criminal Police Office, who gives voice to the philosophical reasoning of what creates this type of terrorism - he's like the film's characterization of "The Battle of Algiers." However, despite occasionally coming to life in its second and third acts, "The Baader Meinhof Complex" eventually wears us down with too much information and not enough subtext. The fact that German baby boomers were adamant about eradicating Germany's Nazi past is given short shrift as is the fact that the RAF frequently targeted those with ties to that past. What we can take away from the film is that violent oppression leads to either police states with a terrified citizenry or the type of mayhem depicted here. Sadly, history seems determined to keep repeating itself.

Small and Pincus, on their limited budget, trek form Pittsburg to Cincinnati, Kentucky, Tennessee, Alabama, Texas and, of course, New Orleans in there quest to get the survivors of Katrina to tell their stories. Their journey, though, turns into more than victims accounts of tragedy and loss. It also shows the effect the stories and the relentless landscape of disaster and suffering have on the documentary filmmakers. The result is a mixed bag of a film that benefits from its socko finale. The Axe in the Attic” is a case where less would have been more. As Small and Pincus move from one city or town to the next, we meet a litany of those whose lives have been brought to near ruin (and, often, complete ruin) by Mother Nature and the inept neglect of the federal government in the guise of FEMA (Federal Emergency Management Agency). Some, though few, were able to rebuild their lives. Most interviewed, at the time of the video recording, are still mired in a bureaucratic nightmare where they are force to live in FEMA-supplied trailers and, even, tents. And, this is goes on for months after the disaster struck. Talking heads telling about their tragic losses, people digging through the debris that were once their homes, the anger that engulfs them are all very interesting but it gets repetitive. The filmmakers want to give shrift to all of the victims but, at nearly 2 hours long, “The Axe in the Attic” loses steam, making me zone out after a time. Here is a case where some judicious editing – or, leaving the filmmakers’ own emotional involvement out of the finished product – would have made a tighter, more effective documentary. Still, it is a staggering account of personal tragedy and the government’s failure to provide immediate (and later) assistance following the massive storm. A more fully realized approach to the Katrina catastrophe is Spike Lee’s 4-hour HBO presentation, When the Levees Broke.” But, the dedication of Pincus and Small is no minor achievement, making us see, anew, the aftermath of natural disaster and its impact on so many.