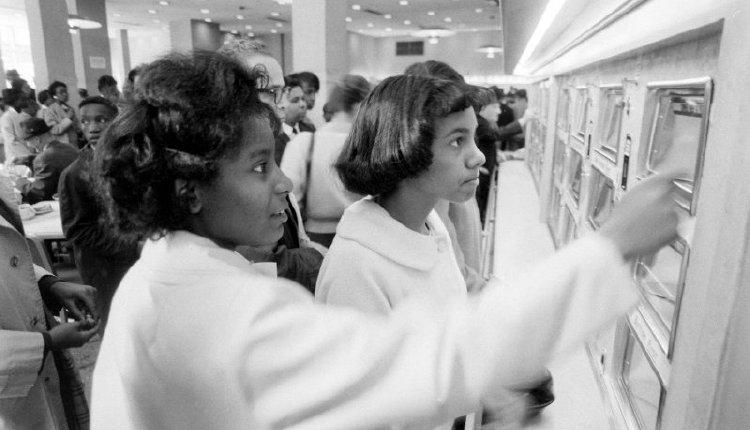 Philadelphian Joseph Horn visited Boston in the late 1800’s and was so impressed by the efficiency of a restaurant he went to, he decided to model a business on it.  He brought Frank Hardart on as a business partner through an ad in the newspaper and the duo launched the “Horn & Hardart” restaurant chain, using a German template for automation.  But it wasn’t until they opened in New York City with a reengineered design featuring rotating drums which delivered beef pies, creamed spinach and baked beans into windowed compartments opened via a coin slot that it became the beloved institution known as “The Automat.”

Lisa Hurwitz and her editor Michael Levine make their directorial and screenwriting debuts with this lively, informative and nostalgic look at a bit of Americana with a surprisingly profound parallel to American democracy itself.  At times it may seem like Hurwitz and Levine are trying on several different approaches to see what fits, beginning with anecdotal interviewee Mel Brooks’ literal instructions on how to construct the documentary, but while their wrap is bumpy (a bit corny, with too much cheerleading for Starbucks by its founder Howard Schultz), the mid-section offers a rich history enlivened by stories from the famous people who went there.

There are interviews with descendants of the founders and the man appointed by Horn to succeed him as well as engineers and historians, accompanied by stills, archival footage and pop culture references.  Horn & Hardart’s vision to serve good food at low prices in beautiful surroundings was a lifeline to many during the Great Depression, but it was the explosion of women in the workforce in the 1920’s which powered the chain’s growth.  Unaccompanied women felt safe at The Automat, a place where they could meet and have a good cheap lunch as well as the company’s famous French drip coffee served from an ornate dolphin head spout.

There is some delightful back and forth editing between Brooks and Carl Reiner, who could almost be sharing space so attuned are their recollections (Brooks also wrote and performs the doc’s original song, ‘At the Automat’).  We can appreciate just how long Hurwitz has been working on this project, given that her two government interviews, Ruth Bader Ginsberg and Colin Powell, are both no longer with us.  Powell speaks about his childhood poverty and how a Black man could enter The Automat with no fear of segregation, a democratic company policy also underscored by RBG (Horn and Hardart are also lauded as exemplary employers who went out of their way to provide a helping hand).  It is devastatingly sad, therefore, to watch The Automat’s decline, the company’s welcoming policy turning it into a de facto homeless shelter as wealth inequality began to take hold, the product still the same but the environment more sketchy, a far cry from the Great Depression when a socialite in furs could share space with a man without a home.  The company that did right by all was finally forced to double the price of its nickel coffee after losing money on it for years and its loyal clientele reacted with a disloyal backlash.  Horn and Hardart closed its last Automat in 1991, its prime NYC locations transformed into franchise fast food.

Hurwitz packs a lot of history around what at first may seem an eccentric subject, all in an economical 79 minutes.  By the time Mel warbles his paean to the place, you’ll feel like you’ve lost an old friend.

If you lived in New York or Philadelphia in the 1940s, 50s and 60s, you were likely a patron at Horn & Hardart Automatic Restaurants, where for two nickels you could get a hot cup of coffee and a piece of pie through a magic window. But, the world moved on to fast food and this meant the demise of “The Automat.”

This lovingly told and constructed history of the automat is really, for me, a nostalgic journey. This is strange, since I grew up near Boston, not the home of Horn and Hardart, and, as far as I can remember, I had never been to an automat. But, as this comprehensive document points out, the H&H restaurants and their concept appeared in films and television over their year of business, like “Breakfast at Tiffany’s (1961) and TV’s “Barney Miller (1975-1982).”

“There Is Nothing Like the Coffee at the Automat,” written and performed for the documentary by Mel Brooks, rounds out this charming document of an American culinary institution. Maybe only a few of our millions ev

A Slice of Pie Productions opened "The Automat" in select theaters on 2/11/22.  It opens at Brookline's Coolidge Corner Theater on 5/13/22.