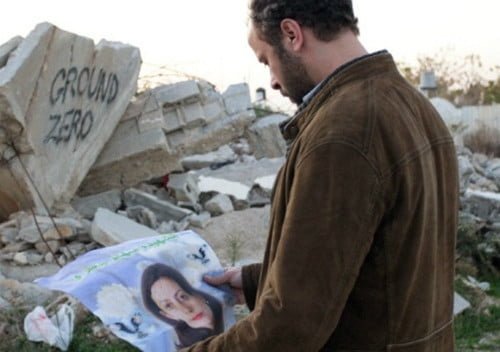 Before Siham (Reymond Amsalem, "Lebanon") leaves to visit family in Palestine, she tells her husband, Dr. Amin Jaafari (Ali Suliman, "Paradise Now," "Body of Lies"), that 'Every time I leave you, I feel like a part of me dies.' Later that evening, as the first Arab recipient of the prestigious Bar Eliezer medical award, he gets a call from her but says he cannot speak. Just 24 hours later, he will be viewing her remains and denying any possibility that she was the suicide bomber responsible for "The Attack."

Adapting Yasmina Khadra's novel, cowriter (with his "Lila Says" coscripter Joelle Touma)/director Ziad Doueiri has made the most extraordinary film on Middle Eastern suicide bombings yet by turning it into an investigative love story. This intimate film is beautifully structured, using flashbacks to paint the portrait of a marriage, and features heartbreaking performances from its two leads. The mysteries begin at the movie's onset as we wonder why Siham would choose to be away when her husband is being honored. While lunching the next day with his boss Raveed (Dvir Benedek, "A Matter of Size"), who makes comments that suggest the Palestinian surgeon may not be embraced as strongly as the award indicates, a blast goes off in the distance. Soon Amin is in crisis mode, attending to severely wounded Israelis, one of whom refuses to allow the Arab to touch him. Later, his nephew Adel (Karim Saleh) stops by, saying he needs to retrieve some clothes, but Amin doesn't seem to notice the young man's urgent behavior. In the middle of the night Raveed calls, saying his presence at the hospital is required, but that he should not rush to get there. Puzzled, Amin complies only to be asked where his wife is. Then he's told a body is believed to be hers. The morgue drawer is opened to reveal remains that couldn't even be described as a torso. Amin lifts the shroud, revealing Siham's face. One shock is abruptly followed by another as Captain Moshe (Uri Gavriel, "Miral," "The Dark Knight Rises") arrests him, telling him his home will be searched and asking about a cream colored Mercedes which purportedly picked Siham up after she had her bus driver stop. Amin's released and supportive colleague Kim (Evgenia Dodena) puts him up, but when he returns to his home he receives a letter from Siham. The film takes a distinct turn when Amin heads to Nablus, where Siham was to visit, cinematographer Tommaso Fiorilli casting the Palestinian exteriors and mosques in hellish red, Éric Neveux's ("Intimacy") score taking on thriller elements. The story, too, becomes almost an analysis of a marriage, as Amin learns his wife's secrets and begins to see the world anew, a new perspective given weight when he returns to Tel Aviv and hears Kim's surprisingly disdainful view. Amin's dangerous attempts to find his wife's mentor, Sheik Marwan (Ramzi Makdessi), doesn't give him the answers he seeks - the truth comes eventually, from a source which shocks him. And with each new revelation of Siham's unknown life, Doueiri goes back in time, Amin filtering his memories with new eyes. That he loved his wife and she loved him is never in question. The final scene will rip your heart out.

Dr. Amin Jaafari (Ali Suliman) is a prominent Palestinian surgeon working in Tel Aviv. He receives a prestigious award at an Israeli medical conference but his wife Sihan (Reymond Amsalem). During the award ceremony her receives a call from her but does not answer. Later, while having lunch with his colleagues on the terrace of his hospital, he hears a muffled explosion. Soon, the emergency ward is teaming with victims, one of whom is not expected after “The Attack.” Director and co-writer Ziad Doueiri (with Joelle Tourna) adapts Yasmina Khadra’s powerful novel about a man caught between two worlds. Amin, though Muslim from birth, is a secular intellectual who sees the Israeli-Palestinian conflict from his humanitarian, apolitical doctor’s eyes. After spending many hours in the operating room plying his medical skills to save those injured in the blast, he takes a break and goes home to an empty house – Sihan is away for a few days visiting her sister in Nazareth. The phone rings and he is called back to the hospital without being told why. At the hospital, he is taken aside by Tel Aviv cop, Captain Moshe (Uri Gavriel), the bearer of very bad news. Amin is taken to an autopsy room where the partial remains of one of the bombing victims lay and asked to identify the body. When he sees his wife’s face, he collapses. Once revived, the captain tells him that the specific damage to his wife’s body is because she exploded the bomb! Incredulous, Amin sets out to prove that his wife was an innocent victim, not suicide bomber, but he will learn much more about his wife than he ever knew. “The Attack” is ostensibly about Amin proving his wife’s innocence after the horrific accusations of being a suicide bomber are made against her. The story is much more than just that, though, as Amin makes a journey of enlightenment. He delves into Sihan’s past to try to get answers but ends up with more questions. Ali Suliman is terrific as the beleaguered surgeon whose life is turned upside down in a single, violent moment. Reymond Amsalem is also notable as his mysterious wife Sihan, whose past slowly unfolds for Amin as his investigation expands to include her family. Powerful, poignant and personal, “The Attack” is a gripping drama about a man who the viewer can both sympathize and empathize with. I asked the question: what if he was me?