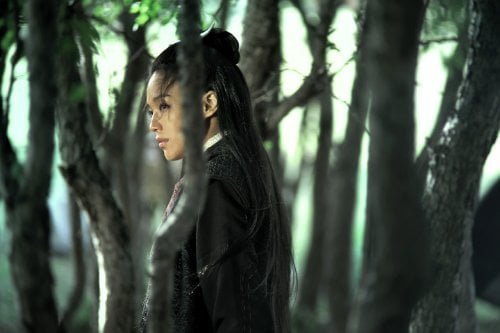 In 8th century China, a declining Tang Dynasty established military garrisons to protect it from outside forces. A century later, these provinces ironically became the Tang court's biggest threat. In Weibo, the strongest of these, Nie Yinniang (Shu Qi, "Three Times") is taken from a General's house as a child and trained in swordplay by a nun-princess (Sheu Fang-yi). When the adult Yinniang is sent to kill a Governor, she fails to complete her mission when she finds him asleep with his young son. Accused of lacking resolve, her master gives her a horrific assignment. She's to return to Weibo and kill her cousin and former betrothed, Tian Ji’an, the Governor of Weibo (Chang Chen, "Happy Together," "Three Times") in "The Assassin."

Cannes winning cowriter/director Hou Hsiao-hsien ("Flight of the Red Balloon") has made his first wuxia film and it is a stunner. Although scenes of strategizing sessions in the Tang court can be dizzyingly dense, the only story one really needs to follow is that of the protagonist and Yinniang's tale is all we need. "The Assassin" features scene after scene of heart stopping beauty, all set to one of the year's most inventively evolving scores. Hsiao-hsien begins his tale in academic ratio black and white to establish back story as we witness Yinniang's skill, slashing the throat of a man on horseback, then segues to a rich gold and red color scheme to tell the assassin's story (his film opens to widescreen as a woman tells the fable of a lone bluebird to music). News begins to spread of Yinniang's return in Weibo, now that she 'has completed her studies.' Ji’an's wife, Lady Tian (Zhou Yun) has her antennae up (almost literally, her elaborate hair styles something to see!) and when walking in the garden with her ladies, she spots a black clad figure in the woods. Yinniang slips in in the night, but although she confronts Ji'an, she does not kill him, leaving behind a carved jade disk. Ji'an explains to his wife that his mother, Princess Jiacheng (also Fang-yi Sheu), was given two as a symbol of a decisive break when she was forced into a marriage to strengthen the empire and that she, in turn, gave one each to him and Yinniang to betroth them. But his mother went back on her promise, pairing Ji'an for political motives. Even Ji'an's mistress, Huji, is moved by the assassin's story. The film is at times deliberate, cinematographer Lee Ping Bing's ("Flight of the Red Balloon") camera observing the exquisitely designed mise-en-scene, where even the arrangement of pomegranates in a bowl can evoke an emotional response. Hsiao-hsien furthers the feeling of reverie with sheer curtains reflecting candlelight, their movement almost making us feel the breeze that caused it. In one scene, a spell is cast by a man whose distinctive white eyebrows end in corkscrews which entwine into his flowing beard. He drops a paper figure into a bowl of water and its movement magically seems like an animation. A forest of birch trees forms patterns on the screen. The score (Lim Giong, "Still Life") begins with the pulse of a cello, then a drum, gradually becoming melodic. A dance performance is accompanied by music that wouldn't be out of place in a 50's Hollywood musical, if given a tinge of exotic edge. The film's conclusion adds bagpipes into the mix. And then there is Shu Qi, a sleek stunner in repose and in action. Her strikes are brutally quick, lethal yet elegant, her pauses reflecting her heart. It's all simply glorious. "The Assassin" is Taiwan's submission for the Foreign Language Oscar. Grade:

A man is only remembered for his work” is the belief that Sam Bicke (Sean Penn) lived by in 1974. But, a broken marriage, bad luck and failings at his work place make him blame American Society for his woes. Sam’s tortured mind begins to focus this blame for his plight until only one thing will make things right - The Assassination of Richard Nixon.” First time director Neils Mueller, co-scripting the story with Kevin Kennedy, tells the true life tale of a very troubled man whose fevered mind hatched a plot that was inspired by the 1973 incident when a stolen military helicopter landed on the White House lawn. From stolen helicopter to hijacked airliner, Sam alters the concept to an act of terrorism that would resonate three decades later – crash a stolen plane into the White House and kill the cause of all evil: President Richard M. Nixon. Assassination” is, foremost, a complex character study, by Sean Penn, of a man who believes his life is on a rebound. But, he is estranged from his wife, Marie (Naomi Watt), who is trying to make a life for her and their kids – a life that does not involve the tortured Sam. He has a salesman’s job at a local furniture store but is constantly belittled by his boss (Jack Thompson) and forced to listen to self-help tapes. All the while, he is bombarded by the TV images of Richard Nixon, the man he blames as the real cause of all the world’s (and Sam’s) problems. Sean Penn, arguably the best American actor now living and performing today, gives a seamless perf as a man who thinks his life is on the mend but, in reality, he is making a slow, steady descent into a mental hell that will totally consume him. Penn’s performance is the reason to see “The Assassination of Richard Nixon.”