The Art of Self Defense 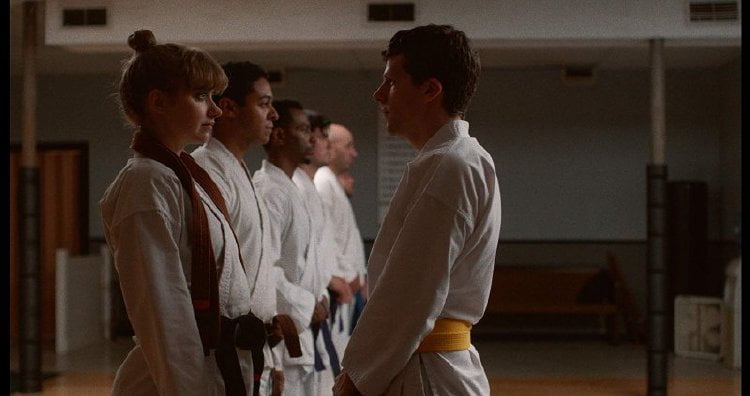 Casey (Jesse Eisenberg) is the living definition of a milquetoast bookkeeper. One night, he goes out to buy dog food for his dachshund and a roving motorcycle gang jumps and brutally beats him, putting him in the hospital. Tired of being in constant fear, he decides to do something about it and joins the local karate dojo to learn “The Art of Self Defense.”

Accountant Casey Davies (Jesse Eisenberg) is ridiculed at work for defending his boss, Grant (Hauke Bahr), a decent man, and meekly backs off while taking note of one of his harassers' over-the-top macho magazine promoting guns, wolves and female breasts. That evening, after realizing he's run out of his beloved dachshund's kibble, he walks to the store, only to be mugged and badly beaten by several men on motorcycles. Casey considers buying a gun, but cannot leave the store with one due to a background check. So when he walks by a karate school, he slips in and, responding to the Dojo's Sensei (Alessandro Nivola), decides to learn "The Art of Self-Defense." Writer/director Riley Stearns's pitch black comedy is like a feminist take on "Fight Club" had "Fight Club" been addressing toxic masculinity. Featuring Jesse Eisenberg's best role since "The Social Network," "The Art of Self-Defense" also features exemplary supporting turns from Nivola as his unhinged Sensei and Imogen Poots as the brown belt whose gender dictates that she will never be a man (the latter a comment made in all seriousness by the Sensei). Stearns's world is one of drab office buildings, storefronts and apartments, a nondescript cafe in depressing Blandville, U.S.A the place we first meet Casey being mocked by a French speaking couple (of course it is revealed that Casey understood as he learns French from a tape in his car on the way to work). People tend to be expressionless and speak in a monotone. Casey appears to have no one in his life except for his soulful little dog, although his boss, at least, appears to care, calling Casey at home after his beating to encourage him to take the time he needs to heal. Casey responds to what he sees in the Dojo, especially when the Sensei takes him seriously, encouraging him to join a free first lesson. He arrives in time to see the end of student Anna's (Poots) lesson for kids, one in which she hilariously instructs them on how to ram someone's noise into their brain or strangle someone from behind, before berating him for breaking the Dojo's first rule - 'No shoes on the mat.' Casey is given his white belt, told to punch with his feet and kick with his hands and invited to spar with Kennith (Phillip Andre Botello) who admires Casey's balance. Casey is so stunned and grateful when he achieves his yellow belt level, he has colored leather belts made up for everyone so that they may feel like their powerful karate incarnations out in the everyday world. But he's also noted that Anna has been bypassed for a black belt, which instead is granted to a lesser male practitioner, Thomas (Steve Terada). Stearns's humor is deliciously dry. Take those belts for example. While Casey looks amusing in his yellow leather belt, it is far funnier how much the brown and black ones are admired. One wonders if his name, Riley, has been the object of ribbing as Casey's is frequently called out for being feminine in this world where 'Everything should be as masculine as possible!' When we learn that the Grand Master, who was killed 'by a hunter with a shotgun who mistook him for a bird,' and whose belt encompasses all of the colors of his Dojo, could kill a man by punching his index finger through their brains, we have no idea just how this will come back to bite us, but Stearns has all kinds of shocking surprises up his sleeve. Casey soon learns his yellow belt hasn't changed his life when he's bullied into backing down in a parking lot by a man who's dinged his car with his truck door. Sobbing in his car, Casey takes his fears to his Sensei, who steers him from Adult Contemporary to Heavy Metal and advises learning German over French. Then Casey gets a call in the middle of the night, his Sensei claiming to have found one of his attackers... Those expecting a rollicking comedy should be forewarned that things get very, very dark and very, very violent in "The Art of Self-Defense," but it is never gratuitous. It's easy to see why the intellectual Eisenberg was drawn to this role and he's perfect as the meek nice guy troubled by his own transformation into a killer, one of the rare actors who can play geeky and intimidating with equal conviction. Nivola's smooth even keel performance slips into something else altogether right before our eyes while Poots does the opposite, her harsh first impression masking hidden hurt and depth. The film is composed by cinematographer Michael Ragen to accentuate power dynamics. "The Art of Self-Defense" is sly and brutal and clever in its exploration of just what makes a man. Stearns wraps with a humdinger of an ending that proves Casey's surpassed his teachers in figuring that out. Grade:

Talk about the perfect vehicle for an actor. Jesse Eisenberg is made to play Casey Davies, giving the character depth and nuance as he travels an arc of change from quiet, frightened accountant to self-assured and commanding fighter. Casey, after the beating, ended up in critical condition and his slow recovery just added to his fear of others. He wanders into the dojo run by Sensei (Alessandro Nivola), the enigmatic instructor who woos Casey with chance to be a man, a real man. But, the story turns out to be something very different. It is more how Casey becomes a real human being, eschewing the machismo of his mentor in favor of humanity. But, I say too much. While Casey is the focus of “The Art of Self Defense,” his co-stars Nivola and Imogen Poots, as brown-belt karate warrior Anna, are much more than two-dimensional as he represents the unforgiving testosterone-driven and domination-hungry machismo. Anna is the strong and capable woman who has to prove that she is the equal to a man by being better. There is intense symbolism in both characters. The story, by director Riley Stearns, wears its liberal, pro-underdog heart on its sleeve and, at a time of divisiveness, its feel-good heart and soul gives me hope for the little guy.