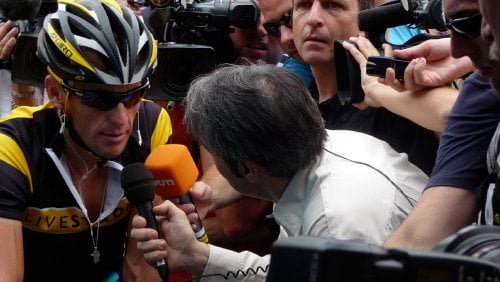 In 2008, writer/director Alex Gibney ("Taxi to the Dark Side," "Client 9: The Rise and Fall of Eliot Spitzer") got access to film Lance Armstrong as he came out of a 2005 retirement to attempt to win his Eighth Tour de France bicycle race, considered the most grueling sporting event in the world. Armstrong was a hero who had beaten cancer and won the event a remarkable seven consecutive times. But controversy about doping trailed behind him and although many refused to believe it, including his documentarian, Gibney ultimately had to change the course of his film when he realized he had been duped into "The Armstrong Lie."

Documentaries by the very nature don't always turn out to be what the filmmaker sets out to capture, one famous example being Joe Berlinger and Bruce Sinofsky's "Paradise Lost: The Child Murders at Robin Hood Hills," the first in their series about the West Memphis Three. Gibney had the opposite problem on his hands, having set out to document a man he believed to be innocent who turned out to be guilty. But where Berlinger and Sinofsky's film revealed many outrages, Gibney spends over two hours presenting information that's largely already available (and stinting on some that is not). The prime artifact of his film is in capturing Armstrong's persona, a man who has carefully formed his image, fully aware of the lure of his story, and who we see time and time again lie through his teeth with what appears to be a clear conscience. In fact, the prolific documentarian begins his second release of 2013 ("We Steal Secrets: The Story of WikiLeaks" came out earlier this year) with Armstrong's confession to his camera that yes, he lied to the filmmaker throughout 2009, followed by the widely watched admission on Oprah Winfrey's show. Gibney then goes back in time to chart his subject's beginnings, where the young man's ambitions were bolstered by his single mom (Armstrong's mother would appear to be a very integral part of his story, but Gibney quickly blows by her part in his story; Sheryl Crow, to whom Armstrong was engaged, is mentioned only as a 'rock star' and we never hear a word about his present wife). Brain and testicular cancers should have sidelined the young athlete, but he astonished everyone by reentering the sport one year after undergoing surgeries and chemotherapy treatments. The most interesting character to emerge from Armstrong's career is Italian doctor Michele Ferrari, devoted to the study of how to increase human endurance threshholds. We're given an inside look how Ferrari's training worked, including banned drugs and practices. In one outrageous bit, we see Armstrong's team 'hiding in plain sight,' as they board a trailer beside the Tour course for outlawed blood transfusions. Jealousies and Armstrong's own manipulations of those who considered themselves 'friends' eventually caused his downfall, however, something which may never have happened if he hadn't had the chutzpah to stage a comeback when his prior victories had already been questioned. Armstrong's firm belief that he was working 'within the system,' one which had been corrupt for years, becomes delusional when Gibney highlights the fact that race organizers were expecting slower finish times after too many doping scandals, not broken records. (For the record, Armstrong would not have won the 2009 race, ambitious team member Alberto Contador frustrating team director Johan Bruyneel's efforts to get Armstrong on the podium.) The one thing we cannot take away from Lance Armstrong is his work for cancer victims, particularly children. This passion appears to be genuine. But then again, after Gibney's dissection of what makes the man tick, it's hard not to wonder how much of his charitable work is motivated by self interest.