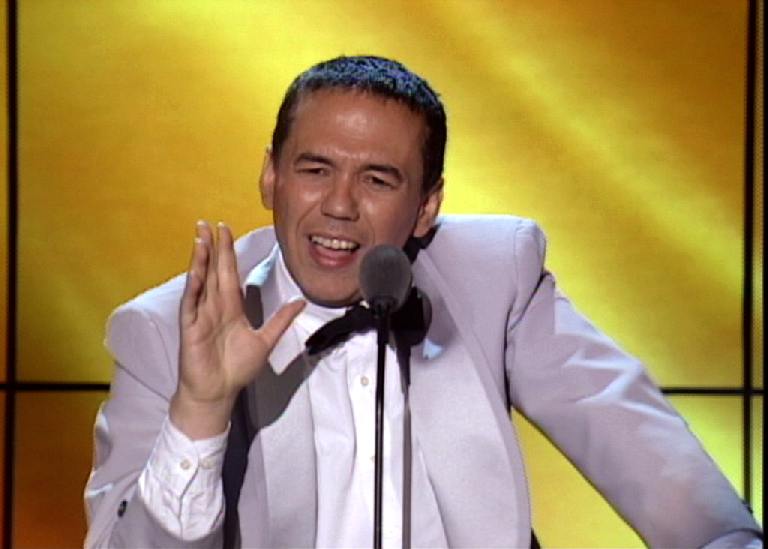 Penn Jillette (of the comic duo Penn & Teller) and Paul Provenza delve into the behind the scenes joke that has kept comedians entertaining themselves since the burlesque era. With the input of over a hundred of their fellow entertainers, we're given just as many variations on the man who went into a talent agency and gave a rundown of his family act. When he's asked what the act is called, the punchline is always the same - 'The Aristocrats!'

OK, so there are actually a couple of variations on the punchline too (The Sophisticates being one, The Debonairs another, subtle differences that are acutely analyzed), but it's the description of that act that allows the comics to riff and the evolution of this free-form joke telling has proven that it is usually the filthiest, most depraved renditions that evoke the most uncontrolled responses. In one of the film's best moments, Gilbert Gottfried's version during a Hugh Hefner roast literally causes Rob Schneider to fall out of his chair (Gottfried's even funnier during a face-the-camera interview when he matter-of-factly explains how certain bodily fluids would come into the joke's play, an account that would repulse out of context). But "The Aristocrats" is more than just a series of different tellings of the same jokes. It begins to make one think about the nature of humor and self-cencorship. Is it possible that those of us who can laugh at the filth on display here are perhaps enjoying the comics' ability to fly into uncharted territory, damning the torpedos of decency? Comedy is a high wire act and freedom of speech is a requirement of the trade. Still, incest, bestiality and scatology are not subjects most people would admit being amused by. It says something that Jillette and Provenza utilize Phyllis Diller as a slyly self aware arbiter of good taste. It is also sometimes surprising who provides the funniest bits here. Besides Gottfried, whose stock is sure to soar because of this, there's Paul Reiser's reminiscing, Drew Carey on the power of his closing finger snap and "Full House's" Bob Saget shocking himself with the depths of his own depravity but cracking up at the same time. Meanwhile, the legendary Eric Idle is more conversational on the subject and superstar of the moment Jon Stewart could have been cut altogether he adds so little (last decade's 'it man,' Jerry Seinfeld, is notable by his absence). Stalwarts like George Carlin don't disappoint, Billy Connelly's laughter alone is infectious and the always indispensable Robin Williams gets a huge laugh with a hoary old clean joke about a rabbi and a frog, perhaps best demonstrating that it's all in the telling. Location also has an impact, with Jon Ross' routine in a men's room top notch and Billy the Mime's outrageous act on a public street all the funnier for how long it goes unnoticed. Inventiveness, such as Kevin Pollack telling the joke as Christopher Walken or Eric Mead presenting it all with a pack of playing cards, also scores points. "The Aristocrats" isn't an all male club, either. While one wonders where obvious bawdy choices like Margaret Cho and Roseanne Barr are, Lisa Lampanelli is the only professional who takes the joke into her stage act, turning it into a very un-PC racial piece that slays her audience ('the slurpee Indian, not the casino Indian'). Carrie Fisher and Sara Silverman both make it autobiographical, Fisher using her parents, a goat and Mickey Rooney to tell the tale while Silverman turns it into a repressed rape gag involving a well known vaudeville agent. Paula Poundstone is probably too battle scarred to even keep company with jokes about sex with children, but one wonders if Ellen Degeneres was even invited to this party or whether her formerly controversial image is now too sacrosanct for such a revel. It is a real mystery, though, why Whoopi Goldberg is one of only two black comedians to participate (Chris Rock being the other). Just imagine Bill Cosby using Jello as a springboard. Provenza and Jillette gathered their material informally, using no lighting setups for catch as catch can shoots done with consumer grade video cameras, but, they don't limit themselves to talking heads. Steve Wright is framed at the end of a chandeliered hotel corridor like something out of "The Shining." Another corridor provides the perfect entrance for a charming sendoff from Tim Conway. The filmmakers also include a specially commissioned animation from Trey Parker and Matt Stone that explores the joke's ability to confound many (Cartman tells it, but Stan doesn't get it, just like Dick Smothers in another piece). Educational aspects include Andy Dick explaining what the Strawberry Shortcake and Rusty Sanchez are and just by its repetition, the construct of a joke can be analyzed over and over, as can the nature of humor. Gottfried had been flatlining at that Hefner roast, making allusions to stopovers at the Empire State Building just three weeks after 9/11. Can we laugh about anything as long as a wound isn't too deep and too recent? "The Aristocrats" is dedicated to Johnny Carson, a man revered for his uncanny knack for finding the funny in the here and now.

There aren’t many absolutes in this world but comedians Penn Teller and Paul Provenza have fallen upon a doozie as they collect over 100 comics to glean their impressions on the world’s dirtiest joke. What’s the punch line for this most crass gag ever told? Why, it’s “The Aristocrats.” Before I begin, let me issue a warning: if you are sensitive to raunchiness, incest, rape, gross outs, discussion of bodily fluids, disgusting language and graphic descriptions of bizarre sex, then I think you should give “The Aristocrats” a very, very wide birth. However, if there is an adventurous bone in your body, and a thick skin for the above-mentioned naughtiness, then this may just be a different kind of film for you. Teller and Provenza have collected the musings of some of the most well known, and not so well known, comedians as each discusses, and sometimes tell, the dirtiest joke ever. It always begins with a variation of “a man walks into a talent agent’s office and says Have I got an act for you!’” followed by “What’s the act about?” These innocent beginnings open the floodgates as many of the comics put their own spin on this legendary Vaudeville tale that is so nasty that the comedians will only tell it to each other. The makers of this funny and offensive documentary take the observations on the joke of such comedy legends as Phyllis Diller, Larry Storch, Rip Taylor, Robin Williams, Emo Phillips, Billy Connelly, Don Rickles, Steven Wright and the Smothers Brothers, among many, many more. They discuss the origins of the gag, how it has been a backroom mainstay for many of them to amuse those within the inner circle of comedians and the very different ways the story can be told. Several of the comics get to tell their own version of the Aristocrats and there are some notable performances and tellings. Stand up comic Bob Saget gives one of the best interpretations of the joke – if raunchiness is the gauge for best – while Gilbert Gottlieb garners the most yucks with his no holds barred version performed on the Comedy Central roast for Playboy magazine publisher Hugh Heffner. A street mime version is cleverest but my favorite performance of the dirtiest joke ever told isn’t even provided by humans. The colorform characters of the “South Park” TV series garnered the most laughs from me as Cartman tells his friends the Trey Parker/Matt Stone version of the raunchy yarn. Now, that’s funny! Penn Teller and Paul Provenza do a terrific job in collecting the greats of comedy to lay bare the once urban myth about the world’s filthiest joke. It is definitely aimed at the select few, not the masses, and will probably offend some of these, too. If you enjoy over the top excess and are not easily offended, then go see “The Aristocrats.” However, if you consider yourself even mildly sensitive, then stay well clear.