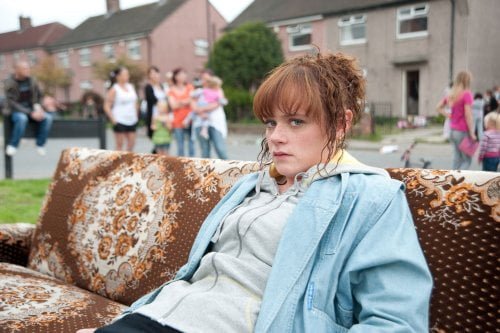 In the 1980's, Andrea Dunbar was the single mother of three children by three different fathers who lived in the rough Buttershaw estate in Bradford, West Yorkshire. She was an alcoholic and drug abuser whose youngest, Lisa Thompson, remembers being locked into a bedroom, the door handle removed, until mum was ready to deal with her three kids. Her eldest, Lorraine, fathered by a Pakistani in a notoriously racist neighborhood, set fire to the room in an effort to keep them warm. They were saved by neighbors. But Andrea had one surprising talent. She could write, and, encouraged by Max Stafford-Clark, the artistic director of London's Royal Court Theatre, got her play produced. It was named for the street she lived on, "The Arbor."

Writer/director Clio Barnard takes the documentary format into new territory with "The Arbor," a film which explores the legacy of abuse in a dual mother/daughter biography. The director uses archival footage, new interviews and actors lip synching to the voices of the Dunbar family as Andrea's plays are staged on the streets of the neighborhood where they were written. The format suggests such films as "Synechdoche, New York" or "American Splendor," but Barnard has gone beyond them, also instilling a theatrical element befitting her subject. This moving film deals with pretty harsh subject matter, but for many of its participants, it feels as if truths are being found through Dunbar's fiction. That first horrific story is recalled separately by Lorraine and Lisa and the half sisters have vastly different opinions of their late mother (Andrea died at the age of 29 of a brain embolism). Lorraine has obviously been scarred by half caste status, especially as she once overheard her mother say that she could not love her eldest daughter as much as her other two kids because her dad was a Paki. Lisa defends her mother. We meet Lorraine's dad (played by Jimi Mistry), and he seems like a great guy. Lorraine's brother is seen defending her in an acted past and recounting today how attitudes have changed but Barnard keeps building up the story and we learn Youssef had a violent side he saved for private. Dunbar's play is staged on a living room furniture out on a lawn as residents gather in a circle watching. It's gritty, nasty family drama that shows where Andrea came from, our first exposure watching her dad guzzle beer while watching telly, seemingly caring little that he has just lost a son whom his wife is openly mourning. The real Andrea who we see in old interview footage is, despite the accent and slang ('or owt like that'), obviously very intelligent and surprisingly well spoken. And yet, we never learn what it is that made her begin to write with such diligence. There were more men and neighbors, Ann and Steve, who took Andrea's kids in and gave them a real childhood, but Lorraine was already too scarred, sliding into the life of drink and drugs and sex she condemned her mother for (she hints at sexual abuse that her mother did nothing to stop). Andrea's parenting skills were clearly lacking, but when Lorraine has a child the Dunbar tragedy grows. Barnard layers in more and more interviews of the real Dunbars as she builds her biographies, but she conducts her own in a theatrical manner - Lisa in her kitchen washing dishes, Lorraine collecting dirty laundry in an institutional setting, Andrea's second husband Jimmy 'The Wig' (George Costigan) wiping mechanic's grease from his hands. The film has been expertly assembled from this spectrum of reality, including clips from "Rita, Sue and Bob, Too," the movie which was made from one of Andrea's plays. Twenty years after the fact, Barnard shows the impact of "A State Affair," the new play which addresses what has changed in the intervening years at Buttershaw, on Dunbars' children. 'As a piece of writing, "Rita, Sue and Bob, Too' was OK. As a piece of autobiography, it was disgusting' condemns Lorraine. And yet Andrea's parents expressed pride. "The Arbor" is a complex portrait of a family and the environment which helped shape them. It's a uniquely immersive experience and one of the best documentaries of the year.