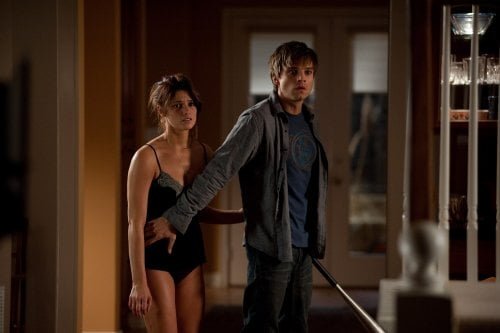 In 1973, The Charles Experiment was videotaped and a spectral figure was captured standing behind the participants. College students Patrick (Tom Felton, "Harry Potter's" Draco Malfoy) along with his friends Ben (Sebastian Stan, the weakest link in TV's 'Political Animals') and Lydia (Julianna Guill) attempt to recreate it with modern technology and lose Ben's girlfriend into the ether as a result. Years later, Ben ignores dozens of phone messages as he moves into a new home with his student vet girlfriend Kelly (Ashley Greene, "Twilight"), but it is immediately apparent that he is being haunted by "The Apparition."

writer/director Todd Lincoln makes his feature film debut attempting to hitch his wagon onto the "Paranormal Activity" phenomenon but fails to deliver a single scare or original idea. This thoroughly inept horror film really makes one question the ways of Hollywood. How does a screenplay like this get green lit when real auteurs fight for funding? How did the finished product secure a theatrical release when far, far superior films end up going straight to DVD? I'm sure the answers all lie in legalese and contractual bullets, but the unfairness of it is the most horrifying thing about "The Apparition." So, the film begins with two bits of found footage separated by decades, then switches to more standard filmmaking while stealing just about every shot concocted for "Paranormal Activity." They even steal the bedsheet gag. But none of it is remotely creepy. Kelly and Ben are housesitting for her parents as they attempt to sell their home in a failed development (the better to keep production costs down). Their only neighbor, single father Mike (Rick Gomez, TV's 'Justified'), warns that his daughter Maggie's (Anna Clark, TV's 'The Event') dog Pepper is a 'wanderer.' Starting writing its obit. There are loud noises and lots of shots of Greene in the shower or running about in a lacy teddy horrified by the rearrangement her closet's been given. When things get too out of control, Kelly and Ben finally leave - to sleep in a tent in the backyard. But of course, as in the "Paranormal" films, it's not the house that's haunted ('Dah, dah, daaah....'). Kelly finds Ben's old school paraphernalia and kicks him out, one of this film's more logical moves until she begins roaming around in the dark with a ghost-meter (that will, of course, get tripped by Ben). Patrick comes back into the picture to embarrass Felton further and for the character to make hysterical pronouncements about 'the others' who 'feed on life' and want to 'come into our dimension.' Greene's tricked up like the girl from "Ringu" most appropriately in the laundry room. Everything ends with Kelly back at the Costco where they bought their tent and one keeps hoping for the guys from "The Watch" to pop in to liven things up. Or Sigourney Weaver from "Red Lights" to expose the fraud. "The Apparition" is simply abysmal.