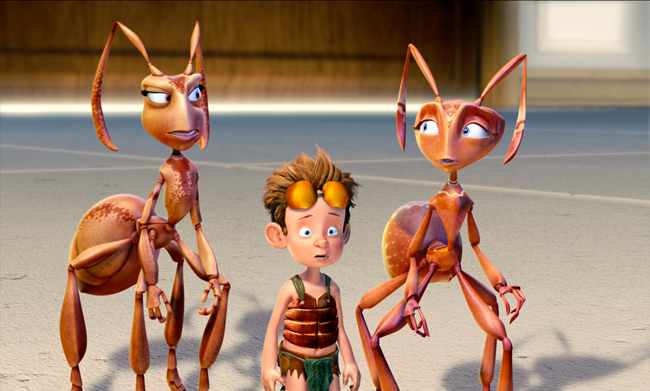 Lucas Nickle (Zach Tyler Eisen) is picked on by his sister, overlooked by his parents and bullied on by local thug Steve. He's new in town and hasn't made any friends and his eccentric grandmother Mommo (Lily Tomlin, "A Prairie Home Companion") spends her time trying to keep the family safe from all those space aliens she reads about in the tabloids. Frustrated, Lucas takes out his anger on the ant hills in his front yard, not realizing that he is disrupting a vibrant society who magically shrink him to their size to deliver sentencing on "The Ant Bully."

"The Ant Bully" is a cute computer generated animation with an all star vocal cast and a simple message for kids - that one can maintain one's individuality while accomplishing more as an organized team. Unfortunately, too many similarities to previous animations like "Antz" and the recent "Over the Hedge" often give "The Ant Bully" the feel of an also-ran. Once Lucas is shrunk down by ant wizard (??!!) Zoc (Nicolas Cage), he's taken under the wing by Hova (Julia Roberts), Zoc's more open minded girlfriend. Instead of delivering Zoc's hoped for sentence of becoming dinner, the ant queen (Meryl Streep) decides instead that Lucas must learn what he means to be an ant. He's put into Kreela's (Regina King, "Miss Congeniality 2") junior training camp to compete against critters that can climb vertical walls and carry twice their own weight, but impresses his team when he mistakenly turns himself into a human slingshot. Under the stress of a fly attack, though, Lucas runs rather than try and save Hova and Zoc is sure he is right about the human, no matter how much Hova defends the boy. In the end Lucas will surprise Zoc by leading a food foraging expedition into the Nickle home and undoing the damage that was his own phone call to exterminator Stan Beals (Paul Giamatti, "Lady in the Water"). Screenwriter John A. Davis ("Jimmy Neutron: Boy Genius") adapts John Nickle's book and one or both of them have borrowed shamelessly from "Antz," with its theme of individuality vs. society and its subplots of flying species attacks and food gathering (not to mention its central species), Disney's "Pinocchio" substituting a toad for its whale and "Over the Hedge," with its humans vs. animals' love for processed foods (here Jelly Belly jelly beans) and evil exterminator. Throw in a dash of "Honey I Shrunk the Kids" for good measure. But "The Ant Bully" is very kid friendly with a series of effective gross-out jokes (Lucas learn's that the 'honeydew' he loves is extracted from the rear end of a caterpillar and a triple-play involving Stan's scalp, nose hair and snot was received with a chorus of 'Eeeeuuuu,' 'EEeeuuUUU,' 'EEEEUUUU') and fairly fast-paced action. The animation is also reminiscent of "Antz," although not as accomplished. The ants of "Ant Bully" have eyes that alternate between the compounded multi-lensed orbs of a fly and plain white backgrounds with human-like irises, but the film's best visual punchline is when Hova demonstrates ant-sadness by turning into a Margaret Keane painting, she of the 1960s' big-eyed children. Vocal talent is good, with Julia Roberts and Bruce Campbell the standouts. In her one scene, Meryl is perfectly, humorously regal, but Lily Tomlin is underfed by the writer, who fails to really work the good idea about space aliens. "The Ant Bully" isn't original and its animation never inspires anything like awe, but for a film that is an imitation of so many better ones, it is surprisingly good in its own right.