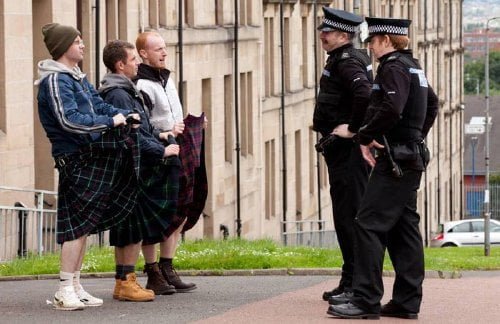 In court after 10 trouble-free months, Robbie (Paul Brannigan) gets off for assault with community service. He's about to become a first time dad and girlfriend Leonie (Siobhan Reilly) insists that he's had his last brush with the law. Robbie draws the attention of his service supervisor Harry (John Henshaw, the "Red Riding" trilogy) who recognizes the tough time the lad's had. He introduces Robbie to their national drink with reverence and Robbie's natural talent for sniffing out the good stuff gives him a shot at "The Angels' Share."

This isn't the first time English director Ken Loach and his screenwriter Paul Laverty ("Ae Fond Kiss...," "The Wind That Shakes the Barley") have visited Scotland, but it's the first time I've detected Scottish director Bill Forsyth's ("That Sinking Feeling," "Local Hero") sense of melancholy whimsy floating atop his usual social agenda. Loach films have been funny while making their point before (see "Riff Raff"), but this one is imbued with a little bit of magic (one late scene comically invokes the Sword in the Stone). Those offended by four letter words should be warned that even the voice of God slings a heavy dose of them here. The film begins with an amusing montage of crimes that will come up in Glasgow's courts, before settling on Robbie, whose situation is serious indeed. He's never had a break in life and now that he's determined to go on the straight and narrow for his son, he's threatened by Leonie's menfolk to stay away. Harry cottons onto this and when Robbie gets news of his son's birth at the job site, Harry accompanies him to the hospital and witnesses his severe beating at the hands of his in-laws. He brings the young man back to his lonely apartment to partake of a bottle he's been saving for a special occasion, a 32 year-old Springbank single malt. At first Robbie recoils from the taste, but another sip and Harry intuits he may have found a budding connoisseur. When Harry invites Robbie to a whisky meeting in Edinburgh, Mo (Jasmine Riggins) overhears and Harry finds himself bringing along just about the whole delinquent group. Robbie impresses event emcee and Master of the Quaich Rory McAllister (whisky expert Charles MacLean) with his ability to nose malts and is given a card by whisky dealer Thaddeus (Roger Allam, "The Iron Lady"). He also learns of an upcoming auction for a cask of legendary Malt Mill, a whisky so precious, a single bottle could go for 1 million pounds. Along with mates, Mo Rhino (William Ruane, "Sweet Sixteen"), and Albert (Gary Maitland), he hatches an idea for a Highland heist. Here's a film that's hugely entertaining, funny and sweet, which also casts Glasgow's downtrodden youth as worthy individuals just in need of a leg up. Harry's the conduit, but Laverty's also concocted an ingenious, victimless crime which allows the filmmakers to have their cake and eat it too. These four kids may be getting their financial start based on theft, but no one will be the wiser, and Robbie even witnesses distillery manager Angus Dobie (David Goodall) confess to a willingness to commit the same crime if only he had the nerve. Roach seamlessly mixes inexperienced players, including Brannigan, whose own background influenced his character's, with professional actors. Brannigan doesn't make Robbie an angel, but he immediately ignites sympathy and he has wonderful rapport with Henshaw. The older actor portrays a generation commonly less sympathetic to these kids with an open-mindedness born of decency and his own loss. Maitland is sheer comic gold whose dimwittedness (he's a howl in the opening scene) occasionally gives way to inspiration, such as the idea of wearing kilts so as not to draw the whisky crowd's attention to sure-to-be-less-successful attempts to dress the part. The filmmakers also have fun with global cultures. Americans are all about money, the Japanese prestige and a climatic search by the police plays with that perpetual question about what's worn beneath a kilt. The film is subtitled for U.S. audiences, but the accents really aren't that difficult to follow and it is so much more enjoyable to just hear lines like 'Flogging the bung's not something we traditionally do at a Saturday night dance.' Although the film includes real locations like Balblair Distillery, there's not a lot in the way of gorgeous highland scenery and one wishes Roach hadn't resurrected The Proclaimers for local flavor, but "The Angels' Share" (the whisky which evaporates during the aging process) is a heady delight.

This is a Scottish rags-to-riches charmer, by director Ken Loach, about four friends from Glasgow struggling to make a living in a tough economy. Robbie (Paul Brannigan) has an additional obstacle to face: his girlfriend Leonie (Siobhan Reilly) is about to have his baby and her family wants noting to do with him. Plus, a run-in with the law earned him a sentence of 300 hours community service. To Robbie’s good luck, his supervisor, Harry (John Henshaw), is a good bloke who takes a liking to the young man and his friends Albert (Gary Maitland), Mo (Jasmin Riggins) and Rhino (William Ruane). He introduces his young wards (except for Mo who is under age) to the pleasures of single malt Scotch whisky. Robbie takes to the flavors, aromas and varieties of the single malt, educating his palate and his mind. This leads to a chance meeting with ”whisky collector” Thadeus (Roger Allam) which, in turn leads to a prestigious whisky tasting which leads to the coveted Malt Mill, the Holy Grail of Scotch whisky. A single cask of which, over 100 years old and valued at one million pounds, is up for auction. This sets the wheels in motion for a mirthful, warm-hearted and sweet-natured movie about an unusual heist that could set the four friends for life. The characters exude an honest humor that, thanks to the use of subtitles, non-Scots can get the almost unintelligible but frequent jokes. And, as with early Bill Forsythe (“Local Hero” and “Comfort and Joy”), Ken Loach immerses us into the heart of Scotland, which I love (though an ice age will soon be upon the isles because the melting ice cap is slowly turning off the Gulf Stream, thanks to climate change.) The caper hatched by Robbie is of the benign variety with no drama, a little intrigue and a lot of great Scottish humor. The cast is excellent from Robbie to his three mates, Leonie and Harry. Director Ken Loach gets fine performances from all but it also helps to have a fine screenplay (by Paul Laverty). This is one of the most likable movies so far this year.