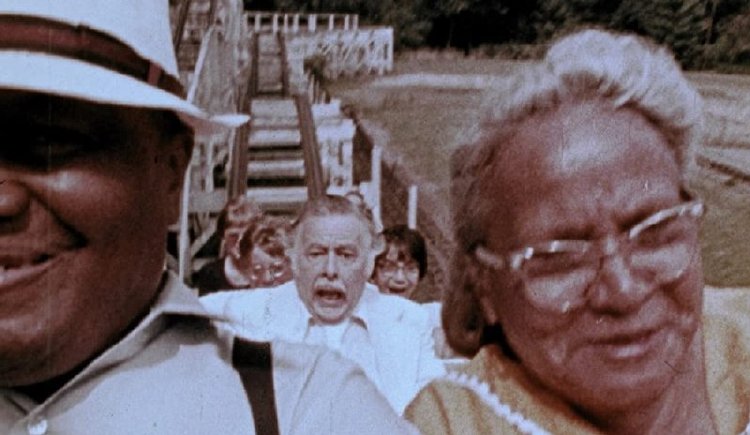 Back in 1973, “Night of the Living Dead’s” George Romero was hired by the Lutheran Society to create an educational film on aging and elder abuse.  What he produced so unnerved them, it was never shown.  Forty-six years later, IndieCollect did a 4K restoration on “The Amusement Park.”

While not every aspect of Romero’s amusement park allegory for society works as well as others, the 52 minute film succeeds in its mission with flying colors.  Filming in the (now defunct) West View Park north of his native Pittsburgh, Romero sets his seniors off into this supposed arena of ‘family fun,’ their first obstacle their limited financial resources for purchasing entry, a ticket seller low balling elders for their prized possessions.

The film features a prologue explaining the issue and a coda suggesting solutions led by Lincoln Maazel, the actor who would go on to star in the director’s 1977 film “Martin.”  Maazel also stars in the film within, his pallor, accentuated by both his white suit and the more youthful crowds surrounding him, making him resemble “Carnival of Souls’” Herk Harvey, adding to the whole’s nightmarish quality (Romero was a fan of the 1962 film, so its potential influence here is quite possible).  He is introduced worn down and bloodied sitting on a white chair in an all white space, telling another iteration of himself not to even try to enter, Romero beginning at the ending to which he will return.

A list of restrictions keeps most seniors who would ride a roller coaster from doing so, Maazel’s subsequent ride rattling him for the remainder of an increasingly fraught day.  Bumper cars appear a more civilized activity, until a 67 year-old woman bumps into a much younger man.  Pulling us out of amusement park territory, a policeman arrives on the scene, but despite Maazel confirming her story that the young man signaled incorrectly, causing the accident, the older people are not believed, the woman’s driving ability called into question.  Young lovers visiting a fortune teller for news about their future are presented with a devastating reality.  Outside the exhibits, older patrons are jostled, shoved and even attacked.  Smooth talking con men and pickpockets approaching seniors resting on benches are the forerunners of today’s telephone scammers.

Perhaps the most upsetting piece of the film involves Maazel’s attempt to receive first aid, the park’s nursing station a microcosm of the health care industry where ailing elders in search of relief are presented with demands for forms and pushed along a bureaucratic assembly line.  As if Maazel’s crowd hasn’t suffered enough humiliation, they then find themselves the stars of a Freak Show.  A little girl’s compassion offers a balm until her unfeeling mother drags her away.

Except for its bookends, Romero’s “The Amusement Park” is noisy and chaotic, the director’s approximation of a senior’s perspective on an uncaring society.  We can easily see it as part and parcel of his horror filmography.  Loaded with empathy for its subject, Romero’s film plunges the viewer into the victim’s world.

An elderly gent (Lincoln Maazel) goes to an amusement park for a day of fun. But that pleasant day turns into a nightmare for the old man in “The Amusement Park.”

Back in 1973, if you were with the Lutheran Society and wanted to commission a PSA to deal with the issues elder abuse and the problems of ageism, who do you go to? The answer: for those fun-loving Lutherans, it has to be George A. Romero, the man who launched the modern-day zombie movies with “Night of the Living Dead (1968).” The moral of the story is: You get what you pay for, and if you get schlock-meister George’s services, you get….”The Amusement Park.”

A battered old man sits in an all white room when another, almost identical but unmolested and pristinely dressed, enters. The first forlornly declares, “There is nothing out there.” His near twin ignores his warning and goes out the door in search of fun. This begins a metaphoric descent into hell a la “Dante’s Inferno” as the filmmakers expose the inequities that exist against the aging in America.

Consider that “The Amusement Park” was made in 1973 and points out how the system ignores and abuses its elderly and, sadly, over 50 years later we are still facing the problem of the ignoring and warehousing the elderly - and the pandemic pointed out the inequities, in spades.

I wonder how I would have felt, back in a day when I wore a younger man’s clothes, about Romero’s weird and poignant public service announcement. Now, being at the same age as the movie’s maligned protagonist, “The Amusement Park” made fresh to me how we treat our old folks, even now (when I’m one of ‘em).

The Shudder streaming platform will premiere “The Amusement Park” on 6/8/21.