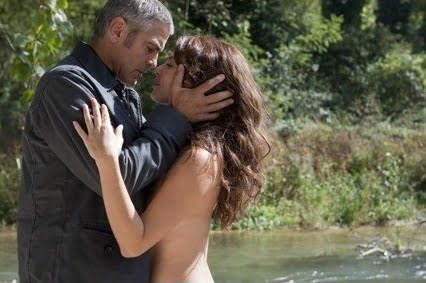 A man and a woman relax nude in front of a fire in a log cabin in Dalarna, Sweden. They venture out later and their insular world is shattered against the snowy landscape. Jack (George Clooney) heads to Rome where he meets Pavel (Johan Leysen, "Gun-shy," "Grimm") and gets instructions to hide out in a small town. There Jack draws the attention of a man riding a Vespa, a Swede in a car, a local prostitute and the village priest who calls him "The American."

Former rock photographer Anton Corbijn made a splash with his directorial debut, "Control," a biopic on Joy Division's Ian Curtis. His followup seems an odd choice. This quiet, cliched and overtly symbolic story of a hit man trying to get out of the business written by Rowan Joffe ("Last Resort," "28 Weeks Later") from Martin Booth "A Very Private Gentleman" gives Corbijn all kinds of opportunities to compose beautiful pictures - Jack uses photography as his cover in Castel del Monte - but the story is so shopworn there is absolute certainty in where it is all going. Religious symbolism gets downright hokey (sinners redeemed, sacrificial lambs, Madonnas and whores, fathers and sons, Hell and Paradise) and a certain rare white butterfly seems the gimmick of an unsophisticated film student. "The American" can almost be summed up by a few phrases. Clooney and naked woman. Clooney framed in cafe window. Clooney crafting weapon. Clooney looking about nervously. Repeat. The film does have an interesting sound design, so quiet that footsteps and ambient sound become quite atmospheric. This is a minimalist film and Clooney's performance is all interior, subdued, watchful. It's the type of film that the fact that we only see Jack eat the homemade stew of Father Benedetto (Paolo Bonacelli), but never in the various cafes, restaurants and roadside stops he frequents, is meaningful. In addition to his fascination using cafe windows to frame his star, Corbijn uses Castel del Monte's cafe to interject a couple of low key jokes. On Jack's first visit, listen to the tune playing on the radio. On his second, Henry Fonda looms menacingly from the wall-mounted TV playing Sergio Leone's "Once Upon a Time in the West." "In Bruges's" Thekla Reuten is a striking presence as Mathilde, Jack's last client and perhaps much more. Violante Placido is sexy and sympathetic as Clara, the prostitute Jack favors. Filippo Timi, so operatic in "Vincere," is practically background here as Fabio, the young man who may have run afoul of the law but who has a special place in Father Benedetto's life. Castel del Monte in the Abruzzo region of Italy is a character in itself, a town scaling a mountain that is all narrow, cobblestone passageways, often shrouded in fog. It is an amusing contrast to Castelvecchio, a town chosen by Pavel which is so obviously inhospitable its town square could come from a Leone Western. "The American's" striking look, hushed sound design and contemplative lead performance are all noteworthy, but despite the winding roads of Castel del Monte, the audience will be able to predict every twist and turn all the way. The only thing "The American" left me mulling over is why hitmen never seem to be allowed to retire.

Jack (George Clooney) is spending an idyllic holiday in the frozen north of Sweden with Ingrid (Irina Bjorklund) when ambushed by hired killers. Jack barely escapes and sets off to Rome to find out who is gunning for him. His boss, Pavel (Johan Leysen), has a “job” for him but Jack tells him that it will be his last – in more ways than one for “The American.” This is director Anton Corbjin’s follow up to his edgy feature debut, “Control (2007)” and the result is a quiet (way too quiet) assassin thriller that has few thrills and lots of long ruminations by taciturn Jack. You never really know what he is – a hit man, a weapons procurer, a spook – as he is hunted by unknown killers who want Jack dead. He broke the rules with Ingrid by allowing her to be his friend and is warned, when sent into hiding by Pavel, to “not make friends.” If you think Jack will take this advice, well…. Scripter Rowan Joffe adapts the Martin Booth novel, A Very Private Gentleman, and, if the book is anywhere near like the movie, it is a snooze. Beautifully shot by lenser Martin Ruhe, “The American” is lovely to look at with panoramic views of the Abruzzo Italy as Jack drives and drives and drives the land. During these extended interludes NOTHING happens. Then there is the romance with Clara (Violante Placido), a hooker with a heart of gold. Again, long, quiet interludes prevail with a couple of sex scenes thrown in for titillation. Although little is actually told about Jack’s past you can piece things together easily enough and nearly all the so-called surprises are telegraphed beforehand. You have also heard this story before and I recalled, while watching “The American,” the much more memorable one-last-job thriller, "The Last Run (1971)” with George C. Scott. Hmmm, both movies are about a man trying to break with his past and both star a guy named George – coincidence or not? The dialog is so sparse throughout “The American” that it could have been silent. Most of the time the camera plays on Jack as he shows sorrow, pleasure and anger with the same face. If Jack is supposed to be a blank cipher, then Clooney has it down cold, too cold. Supporting cast is pretty but bland. Irina Bjorklund is in and out of the picture in short order and Violante Placido, as lovely Clara, and Thekla Reuten, as the beautiful but deadly hit lady Mathilde, are eye candy and little more. A lady totin’ a gun is always sexy, I guess. Johan Leysen is an enigma as Pavel, a man of mystery who is not at all mysterious. A thriller that looks great and gives little and has no surprises – I guessed Jack’s double cross way too early and there are many such moments in “The American” – make for a disappointment. The beautiful photography gives you something to look at while you wait for something to happen.