The American Dream and Other Fairy Tales 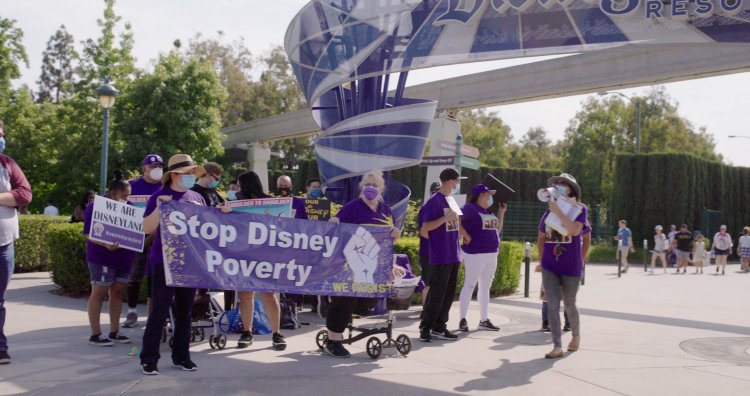 When employees of Disney reached out to a woman known for working inequality issues, Abigail Disney, the granddaughter of the company’s co-founder Roy is surprised to learn so many are facing homelessness and need food stamps to survive.  Believing Roy would never have allowed this to happen, she emails the company’s CEO, Bob Iger, whose $65 million annual salary would require one of his custodians to work 2,000 years to attain.  Frustrated with responses pointing to college and childcare programs, Abigail’s sister Susan suggests she make a movie and together with Kathleen Hughes (TV's 'Bill Moyers' Journal') she tackles the root cause of wealth inequality in the U.S. in “The American Dream and Other Fairy Tales.”

Using the employees of ‘the happiest place on earth’ for perspective on a country-wide issue gives this documentary a particularly pointed arrow, one which may make Disney consider their reputation with their customers.  The film begins by portraying the various hardships encountered by married 10 year veterans of Disney as well as three single women.  Abigail then profiles her family and the founding of the company.  There is a bit of meandering, but just at the point I was itching for the filmmakers to tie what they’d been telling us back to Disney, they do.

We first meet Sam who shows us the pin she received after a year of service.  ‘Steamboat Willie,’ she notes, telling us that 45 years ago, when she began working at the company, people were happy and proud to be working there.  Now Ralph and Trina, parents to three ‘Disney princesses,’ live below the poverty line, relying on her mother to share her home with them.

But although her grandfather and great-uncle worked hard and supported a family on $1/day, Abigail says they didn’t create Disney through hard work alone (she skewers the Republican line about ‘pulling oneself up from one’s bootstraps’ with an animation proving it physically impossible).  So, just when did everything change?  It should come as little surprise to anyone who’s followed American history that the beginning of the downfall of the American middle class was launched by the Reagan administration, something Disney and Hughes provide abundant evidence for.  In a side note, they also portray how the black minority was set even further back, former prosperity having been engineered to deny them, Reagan’s racially charged and factually unsupported Welfare Queen myth convincing many voters tax-funded social security nets were supporting layabouts.  They also profile Milton Friedman, the man who declared that the only responsibility corporations had was to their shareholders, a mantra seized upon by conservatives.

Reagan’s bogus ‘trickle down economics’ didn’t just impact individuals, but their environment.  We hear a decades old proclamation that if ‘Disney does well, Anaheim does well!’ only to see a city of crumbling infrastructure today, corporate tax dollars having shrunk to a trickle.  One mind-blowing anecdote involves the $108 million, 10K+ space parking garage paid for by the city, where Disney keeps 100% of its profits while paying Anaheim $1 in yearly lease fees.

We see Abigail’s comments about Iger’s salary on a TV news program begin a Twitter storm, both pro and con, attention which finds her testifying before Congress.  She’s shocked that not only have certain lawmaker’s taken issue with her camera crew, but they tried to block her presence altogether.  Abigail believes that wealth becomes addictive.  She also believes that corporations have a moral responsibility.  “The American Dream and Other Fairy Tales” is a documentary Bernie Sanders should love and one which uses a name as American as apple pie to open people’s eyes.

American movie making icons, Walt and brother Roy Disney, found Disneyland in Anaheim, CA and the beginning of a vast empire was begun. This dreamland is where workers are happy and cared for by their employer, but it is not in “The American Dream and Other Fairy Tales.”

Roy Disney’s granddaughter Abigail, co-directing with Kathleen Hughes, tells her family’s story from way back when her dad and uncle ran things to modern times. What they show is the enormous difference and disparities between then and now.

The filmmakers do a boiler plate job in presenting the facts they put forth. Back when Abigail was growing up and the family business was booming, Disneyland was a place, in its early days, where a custodian’s pay would allow him/her to have an affordable home, feed the family and pay for health care.

But, that was then and this is now and Disneyland is where the pay hovers at $15/hour, employees need two jobs to pay the bills and they need to go to food banks to make sure they have enough food. This is at a time, in and around Anaheim, where a studio apartment takes up to 80% of earned pay for one person, necessitating that both in a couple must work to survive.

The documentarians do not shed too much new light on the huge disparity between works’ wages and that of a corporate CEO. Just to give an idea of this vast difference, back in the early days of Disneyland, a CEO received about 68 times the median salary of employees. Now, that difference is 500 times favoring the CEO over the worker. And, for former Disney CEO Bob Eiger, with his $68 million/year salary (and $35 million in extras, like severance pay) there is an even a greater difference.

What I take away from “The American Dream and Other Fairy Tales,” when combined with our current state of unstoppable greed, is that, as I have long known, the dream is dead, long live the dream (‘cause you are not going to get it).