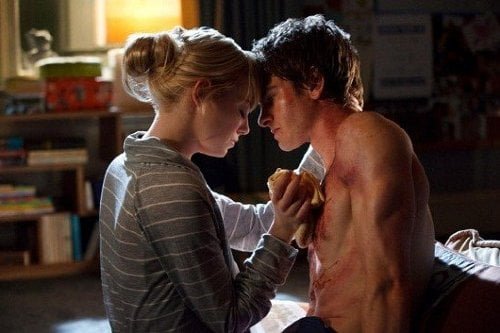 Peter Parker (Andrew Garfield) is a normal teenager trying to get through the trials and tribulations of high school. His mother and father disappeared under mysterious circumstances when he was a child and his Uncle Ben (Martin Sheen) and Aunt May (Sally Field) raised the boy. Peter becomes consumed by the mystery and he goes to his father’s former colleague, Dr. Curt Connors (Rhys Ifans), for answers but gets more than he expected in “The Amazing Spider-Man.”

As a young boy, Peter Parker was suddenly brought by his parents (Campbell Scott and Embeth Davidtz, Lane's widow in 'Mad Men') to stay with his Uncle Ben (Martin Sheen) and Aunt May (Sally Field). He never saw them again. Years later, Peter (Andrew Garfield, "The Social Network") finds his father Richard's briefcase in the cellar. There is a secret compartment with sheets labelled 'Decay Rate Algorithm' and a picture of his dad with research partner Dr. Curt Connors (Rhys Ifans, "Anonymous"), so Peter visits OsCorp to start investigating his past and is startled to find his present - high school crush Gwen Stacy (Emma Stone, "Crazy, Stupid, Love") is Connors' senior intern. He also slips into an unsanctioned area and gets the bite which will turn him into "The Amazing Spider Man." Just ten years after Sam Raimi launched his "Spider-Man" franchise with Tobey Maguire and only five years since his last sequel, the aptly named Marc Webb ("(500) Days of Summer") takes a new shot at the Marvel hero and damned if it doesn't feel fresh again. Webb, whose indie roots might have made him seem an odd choice, succeeds by producing a film that is not overtly comic-booky, one that feels like a more old fashioned film with real stunts and more human consequences to its action, despite being shot in the now fashionable 3D format (the better to appreciate some jazzy looking web swinging in the canyons and undercarriages of Manhattan). This new look crosses paths with the old, for sure, but it also veers off onto its own new directions, beginning with its parental back story. This Peter Parker isn't so much a 98 pound weakling as a self-imposed outsider whose stand for another bullied kid against Flash Thompson (Chris Zylka, "Kaboom," "Piranha 3DD") arouses the interest of Gwen. He recognizes his new powers not like Maguire's hormonal confusion, but with that same moral call to action, although this time he just about takes out a subway car much to his own surprise. The heredity scientific curiosity has him develop his own web shooters using OsCorp material (the company is founded on exploiting properties of cross species genetics and regeneration) based on spider silk and his own costume - the idea for his mask a nice, quick reference to "Spider-Man's" boxing subplot. 'With great power comes great responsibility' morphs into responsibility not being about choice. Guilt motivates Spider-Man's appearances in public where he raises the ire of Gwen's dad, police Captain Stacy (Denis Leary). Meanwhile, Dr. Connors, who is trying to utilize the lizard's ability to regenerate limbs to replace his own missing forearm, faces his own moral dilemma when his colleague, Rajit Ratha (Irrfan Khan, "Slumdog Millionaire"), suggests trying covert human testing at a local VA hospital. When Connors discovers Ratha is headed there, stuck on the Williamsburg Bridge, Spidey faces his first major challenge, especially as only he knows Connors is that giant lizard survivors described as a rampaging dinosaur. "The Amazing Spider-Man" doesn't get everything right. The filmmakers decision to keep away from CGI as much as possible is a good thing, but their use of it for a burning car at the bridge is thoroughly ineffective. On the other hand, the Lizard is quite well done, but that goes hand-in-hand with the writers' (James Vanderbilt ("Zodiac"), Alvin Sargent ("Spider-Man 3") and Steve Kloves (the "Harry Potter" series)) neat paralleling of Parker and Connors and the relationship's play into Peter's paternal need. Ifans is also a complex, conflicted villain, one whom we maintain sympathy for. This in turn makes the climatic terrorizing of the city a wee bit hard to buy, just like it's rather out there that Connors' would instill so much trust in a high school science student (Gwen). If this film succeeds because it's more realistic, Gwen's character is a weak point. But Garfield, a long time Spidey fan, is believable in the role and he's surrounded by a good supporting cast. Sally Field is particularly effective as the concerned and confused Aunt May. Dennis Leary is both a prospective boy friend's worst nightmare and quick with a quip ('What do I look like? The mayor of Tokyo?'). Marvel coauthor Stan Lee has one of his best cameos ever as an oblivious high school librarian. "The Amazing Spider-Man" is a much better made film than Marvel's "The Avenger's" (watch for those 3D Spidey POV shots!) if maybe not as much sheer fun.

The blush must have fallen from the rose for me and Sam Raimi’s “Spider-Man” series. I reread by review of the first and I was surprised to see I gave that film a B+. I think, after seeing “Spider-Man 2 & 3,” I just had too much of Spider-man and Peter Parker as played by Tobey Maguire and I have not watched any of the Raimi Spidey films since seeing them at the theater. So, I was not exactly looking forward to “The Amazing Spider-Man.” Marc Webb, whose first feature film was “(500) Days of Summer,” goes the blockbuster, sci-fi, action adventure flick way with his sophomore effort. And that effort is okay, but not great. Andrew Garfield is likable and not Tobey Maguire so I took to his Spidey/Peter Parker character quickly. It is the story, though, that falls short. There is no depth to its telling, not a surprise considering there are six credited scribes attached to “The Amazing Spider-Man.” As such, there is little story development and the characters are under drawn, especially Emma Stone’s heroine, Gwen Stacy. There is little dimension to the most of the characters, with the exception of Sally Field as Parker’s Aunt May. Special effects are flashy with lots computer generated F/X but, unlike Raimi who went all out on CG!, the filmmakers also utilize live stunt work and motion capture, which I appreciate. “The Amazing Spider-Man” is the kind of escapist movie that is right in step with the hot summer weather.