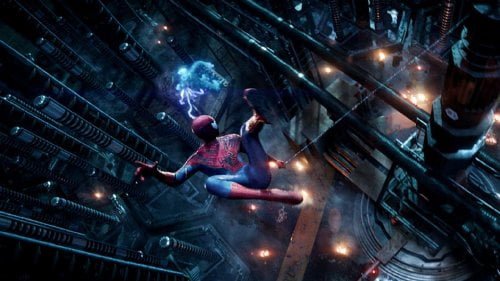 Peter Parker (Andrew Garfield) is a troubled young wall climber. He still mourns the loss of his father and mother and the death of his beloved Uncle Ben. But, the city needs its web swinger when a mild milquetoast, Max (Jamie Fox), is turned into an electricity wielding monster that threatens to absorb New York’s power and rule the city in “The Amazing Spider-Man 2.”

I'm going against the critical tide - I actually enjoyed this more than I expected, but then again I find Andrew Garfield delightful in the role and Dane Dehaan and his vaguely Hitlerish haircut makes for a fine Harry Osborne/Green Goblin. Robert Parker's true tale is a gripping prologue to the film. Web slinging fx keep on getting better. My only issue was with the treatment of Electro (Jamie Foxx) - he's established as a sympathetic character turned mad by a well intentioned act - Electro bears parallels with King Kong, but is treated shabbily even, in the end, by Spidey.

For me, the Spider-Man franchises have been a case of diminishing returns, starting with the Toby Maguire-starring “Spider-Man (2002).” Mark Webb takes the helm for the second time in “The Amazing…” series and is saddled with a script that is the product of SEVEN writers. As such, there is no coherence to the muddled story that has no fewer than thee bad guys, the boring romance between Peter and Gwen Stacy (Emma Stone), Peter’s ongoing angst over his guilt about his Uncle Ben’s death and his uncovering the truth about his parent’s disappearance when he was a mere slip of a lad. These several story lines leans too heavily on Pater and Gwen, with Peter often teary-eyed about her and his angst over the loss of parents and father-figure, Ben. There is not enough Spidey stuff and when there is, it is a cacophony of special F/X fights with lots of web swinging and destruction of property. The action sequences take on a redundancy as the story unfolds and there is nothing new here. I will not go further into the story, though, as the target audience does not give a hoot about what I have to say – they will love it regardless. Films like “The Amazing Spider-Man 2” are the reason why I eschew much of the big-budget output from the major studios and prefer, more and more, the intelligence of independent and foreign films. At least it did not give me a 3D headache.