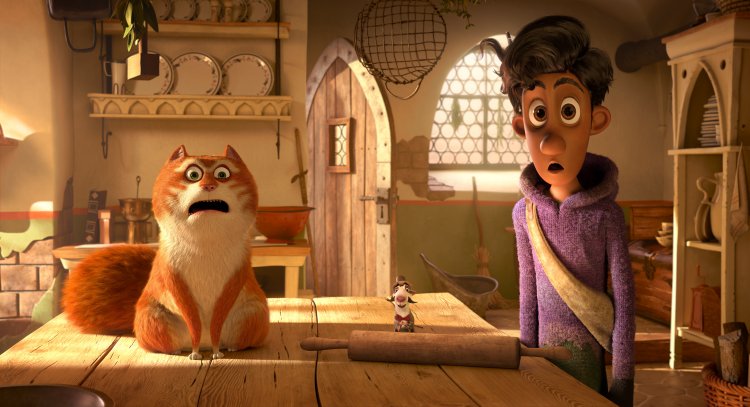 When the rats of Ankh-Morpork began feasting at the garbage dump behind its wizardry university, they gained special powers, including the ability to talk.  A cat who ate one of them also not only begins to talk but becomes their leader by convincing them that the idealized world in a Mr. Bunnsey children’s’ book is real.   The cunning cat teams up with a human, Keith (voice of Himesh Patel), who acts as a faux pied piper as they all travel from town to town creating fake rat plagues, profiting when Keith pipes them away.  But when they enter a town where rat catchers have developed new fangled traps for a mysterious Boss Man (voice of David Thewlis) who is keeping their catch for reasons unknown, it will prove a serious challenge for “The Amazing Maurice.”

Those familiar with the world of the late comedic fantasy writer Terry Pratchett will know his sense of humor ran dark, so despite the fact that this is adapted from his first children’s book (and 28th Discworld novel) ‘The Amazing Maurice and his Educated Rodents,’ parents should be aware that events include animal torture and death (albeit mostly implied rather than visualized), the latter occasioning a visit from two of Discworld’s most memorable characters, Death and Death of Rats.  It will be older kids and adults who will most appreciate “The Amazing Maurice,” a clever twist on the old Pied Piper fairy tale (which, our narrator Malicia (voice of Emilia Clarke), gleefully reminds us is really quite brutal!).

Director Toby Genkel and his screenwriter Terry Rossio begin with a fourth wall breaking wraparound featuring the narrator (who becomes a character within the action) reading ‘Mr. Bunnsey Has an Adventure,’ which we see in traditional animation, before informing us that this is not what our story will be about.  After a quick display of Maurice’s (voice of Hugh Laurie) rat plague scam, he, Keith and their rats, who are all named for the garbage they once consumed, move on to the Bavarian-looking fairy tale town where Malicia is the Mayor’s (voice of Hugh Bonneville) daughter.  In typical Pratchett fashion, the less intellectually inclined male (Keith) falls head over heels for this woman who’s so smart, she deconstructs their scam as soon as she witnesses a talking cat in league with a talking rat.

Once the Rat Catchers succeed in capturing Darktan (voice of Ariyon Bakare), Peaches (voice of Gemma Arterton), Dangerous Beans (voice of David Tennant) and the tap dancing Sardines (voice of Joe Sugg), it will be up to Maurice to try and save them while Malicia and Keith venture into the ‘dark wood’ to find the real Pied Piper (voice of Rob Brydon), whose pipe they need to conquer a rat king, a single-minded force created by tying the tails of eight rats together.

Maurice, resembling one of Maurice Sendak’s Wild Things crossed with Alice in Wonderland’s Cheshire Cat, isn’t the most honorable creature and Laurie breathes just the right mix of self involvement and reluctant hero into him (he’ll redeem himself touchingly in the film’s final moments).  Emilia Clarke, clearly having a good time, gives the film buoyancy.  Each of the rats is distinguished with vocal work and costume defining personality.  The Mob Boss bears an uncanny likeness to the mayor of ‘A Nightmare Before Christmas’ even as we suspect his real identity.  And somehow, the animators and Rob Brydon have made The Pied Piper intensely creepy.

The film impresses in all its technical aspects, its deep focus giving it the appearance of 3D without the pesky glasses.  We’re treated to animated ‘frozen-in-time’ sequences made popular by such films as “X-Men: Days of Future Past” not once, but twice.  “The Amazing Maurice” is a delightful mix of superb animation, clever story telling and British humor served up by a perfectly cast vocal ensemble.


After its premiere at the 2023 Sundance Film Festival, “The Amazing Maurice” will be released into theaters by Viva Kids on 2/3/2023.