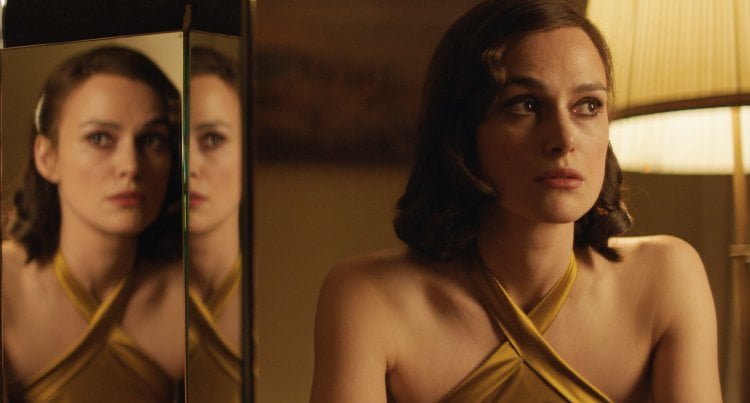 In 1946, Rachael Morgan (Keira Knightley) travels from England to reunite with her husband in Hamburg, Germany, where British colonel Lewis Morgan (Jason Clarke) is assigned to the rebuilding effort. She is taken aback to learn that he has agreed to share an estate with its former owner, Stephen Lubert (Alexander Skarsgård), the home’s architect, and his rebellious teenage daughter, Freda (Flora Thieman). But her resentment gradually turns into something else as she bonds with the German over their shared losses in “The Aftermath.”

The title of Rhidian Brook’s novel, adapted by “Race’s” Joe Shrapnel & Anna Waterhouse, implies a look into the aftereffects of WWII so it is a real letdown to realize that director James Kent (“Testament of Youth”) has played a game of bait and switch, a complex historical period used as a mere backdrop for the story of a marriage teetering on the brink. Rachel, Lewis and Lubert’s story could have had the same arc were it set in Ohio in 1975. Stephen and Freda Lubert’s story is so tangential that his character is underwritten to the point of naïveté and her profoundly disturbing ties to a Nazi plot are not even remarked upon. It is particularly disappointing because Knightley and Clarke’s work here is affecting and Kent’s production is impressive. The first words we hear spoken come from a young boy sitting across from Rachael on the train. ‘We must not frat-er-nize,’ he sounds out, reading from literature provided to British traveling to Germany. Rachael clearly agrees with this sentiment, refusing Lubert’s outstretched hand as Lewis escorts her into his sprawling, richly appointed home. She’s overwhelmed by its size, its servants, its modernity, distrustful of a Mies van der Rohe chair, suspicious of the ‘stain’ on a wall where a portrait once hung. She doesn’t understand Lewis’s compassion for the Germans (Hamburg was hit with more Allied bombs in one weekend than London was during the entire war) and resents his frequent absences. Some pictures in a silver cigarette case gifted to Lewis by his wife reveal the pain that has driven them apart, their young son Michael, killed in a bombing raid. While Rachael is looking for comfort, Lewis has walled in his grief. During one of her many prickly confrontations with Lubert, who has quietly retreated to his home’s third floor, Rachael learns he lost his wife in the same way she lost her son and begins to soften. She takes an interest in Freda, who joins her in playing Clair de Lune. When Freda makes the same mistake Michael used to make, Rachael breaks down and is comforted by Lubert. It’s not long before their shared grief turns into passion. Kent stages this in an interesting way, the evening beginning with Rachael’s seduction of her husband before guests arrive. But an emergency calls him away, both from her bed and their company, German citizens rioting against the British. Lubert is caught up in the same event, arriving back home with a gash to his head and an inebriated Major Keith Burnham (Martin Compston) mistreating his wife’s Steinway. The party quickly breaks up and Rachael picks up her seduction with another man. Knightley’s performance encapsulates a full range of complex emotions, but Skarsgård is simplistic in comparison, too readily accepting of his lot (he has one scene expressing anger when Burnham implies he was a Nazi collaborator), too much of a pushover with his daughter, too instantly enthralled with this woman who’d expressed nothing but disdain. Clarke is also fine, a heroic humanitarian whose depth of feeling is movingly expressed in the film’s last act. The production is stunning in its period details, Hamburg lying in ruins, Lubert’s home a reflection of its past. Costume designer Bojana Nikitovic dresses Rachael in sensuous blouses and tweedy woolen skirts, a bias cut gold gown hugging and swirling around her. Lubert’s precarious position while awaiting clearance papers sees his lean, elegant frame in oversized laborer’s clothes and heavy boots. But while Kent dials up the emotional stakes during the film’s climax, narrative credibility is thrown out the window. “The Aftermath” suggests historical fiction but in the end it just uses its wrenching backdrop for romantic melodrama. Grade: