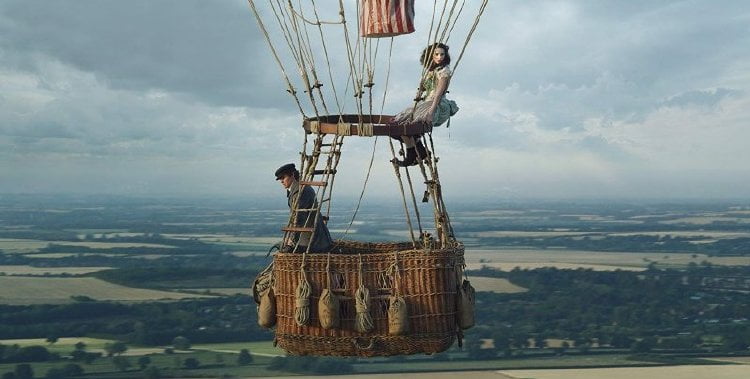 In 1862, scientist and royal meteorologist James Glaisher (Eddie Redmayne) launched a balloon flight that would bring him and his pilot, Amelia Rennes (Felicity Jones), to uncharted heights in the name of weather science in “The Aeronauts.”

Scientist, astronomer and meteorologist James Glaisher (Eddie Redmayne) was convinced there was a scientific method to predict the weather, but could not convince the Royal Society to fund the gas balloon expedition he needed to take his measurements. Glaisher turned to Amelia Wren (Felicity Jones), the widow of famous French ballooner Pierre Rennes (Vincent Perez), to pilot him towards a world altitude record, his appeal focusing on the thousands of lives which could potentially be saved by “The Aeronauts.”

This is 2019’s answer to Robert Zemeckis’ 2015 film “The Walk” with one major problem – it’s not in 3D. Although cowriter (with "Wonder's" Jack Thorne)/director Tom Harper ("Wild Rose") had a true replica of an 1800 gas balloon built and Jones actually performed one of her stunts at 2,000 feet, one experiences the film convinced one is watching two actors on a soundstage intercut with shots of a balloon sailing through the clouds. Furthermore, there was no Amelia Wren, Glaisher’s actual aeronautical partner Henry Coxwell the man who deserves the historical nod having performed life-saving heroics during the actual flight, as is recounted in the book that inspired the film, Richard Holmes’ ‘Falling Upwards.’ Harper does attain tension as his aeronauts scale previously unknown heights, facing a thunderstorm, hypoxia, sub freezing temperatures, a frozen valve which prevents the balloon from descending then a collapse which causes it to descend too quickly, all events which scream for 3D spectacle. Otherwise we’re watching Redmayne fidget with gadgets and Jones’ dealing with the aftermath of an entirely fictional event.

The film kicks off on the day in 1862 when Glaisher took flight and we find him fretting when Wren has failed to appear with liftoff imminent. She’s on her way in a carriage with her sister Antonia (Phoebe Fox) having second thoughts and suffering anxiety from flashbacks which hint at the cause. But Amelia rallies, making quite an entrance dressed and made up like a circus performer standing atop the carriage as it approaches the platform. Glaisher is annoyed by Amelia’s theatrical flourishes, but she reminds him that the people who are paying for their journey are looking for entertainment. On their way up, she’ll provide them one last spectacle using her little dog Posey which also foreshadows the end of their journey.

Harper employs flashbacks to fill in back story, such as Glaisher’s relationship with John Trew ("Yesterday's" Himesh Patel), who searches the skies for the Mammoth with young Charlie (Lewin Lloyd, HBO's 'His Dark Materials') from their liftoff point below. James recites ‘The Fate of the Butterflies’ and Amelia finishes it, another hint of her husband’s death. Later they will be swarmed by a cloud of yellow butterflies, something Trew had predicted which Glaisher hadn’t believed. We’ll also learn that Glaisher’s theories are not supported by his now dementia addled dad (Tom Courtenay) yet are by his mother (Anne Reid), a development that does little but give two great older actors work.

Jones does the heavy lifting here, Redmayne sidelined for a good part of the picture. Everyone else in the movie is, frankly, superfluous. While the actual feat (the record was broken when Glaisher reached 37,000 feet and remains unbroken without supplementary oxygen) and the subsequent clearing of a vent at the very top of the balloon are heart stopping, overall the film is corny.

Usually, when I see the title “inspired by true events” at the beginning of a movie, it prompts me, afterwards, to look into those “true events.” But, even before I could get around to it, I heard the blare that the Felicity Jones character is made up! My response, even after doing the research on the “true event,” is: so what?

I walked into “The Aeronauts” with but a cursory knowledge of the actual story, so I had few illusions about the film or the story. As I walked out, I realized that I had some sweaty-palmed fun watching what I know is a whole bunch of CGI and actors playing before a green screen. Again, I ask the question: so what?

Redmayne’s James is the consummate scientist, willing to risk his life in his quest to further man’s knowledge of the weather, making the popularly unpopular statement that the flight would allow weather prediction! Despite his naysayers and doubters, Glaisher and his daredevil pilot - with femme character, Amelia (and her back-story) replacing the real life (male) pilot Henry Tracey Coxwell – take off amid great fanfare and anticipation. Felicity Jones’s perky enthusiasm and physical efforts make the filmmakers’ politically correct replacement justified.

The story occurs in near real time – the titles tell us that the duo attained an estimated altitude of 36000 feet (about seven miles), with a temperature of -30 degrees Fahrenheit in a flight lasting one hour and eleven minutes - that altitude was about 13000 feet over the previous record. The statistics belie, though, the excitement delivered by director Tom Harper, who co-authored the story with Jack Thorne, in the telling, with typical literary license, of the historic flight.

Despite the fabrications of modern filmmaking – the Hollywood effect – I easily suspended my disbelief as I watched Amelia cavort around the ascending balloon’s rigging – with her little dog - for the benefit of the crowd. But, where I found I was losing myself in the story was in the exciting set pieces as the pair face great danger, hypoxia, black outs and, for Amelia alone, a terrifying crisis at 36000 feet. The acting takes a back seat to the action, and some of the action sequences remind me strongly of the action in Sylvester Stallone’s “Cliffhanger (1993),” and that is not a bad thing.