The Adventures of Sharkboy and Lavagirl in 3-D 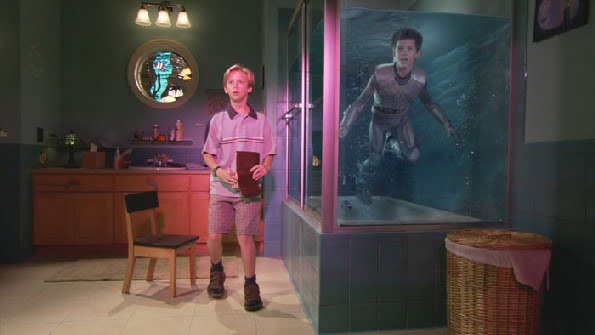 Max (Cayden Boyd) is a lonely little boy who would rather escape into his dreams rather than deal with his parents (David Arquette and Kristin Davis) or face the school bully, Linus (Jacob Davich). He imagines a pair of superhero friends but soon finds out that dreams can become reality in “The Adventures of Shark Boy and Lava Girl in 3-D.”

Max (Cayden Boyd, "Mystic River") has the bad luck to live directly across the street from his school, where bullies harass him and his teacher, Mr. Electricidad (George Lopez, TV's "The George Lopez Show"), worries about Max's belief that he's spent his summer vacation with juvenile super heroes. Dad (David Arquette, "Scream," "See Spot Run") thinks 'kids need their dreams,' but Mom (Kristen Davis, "Sex and the City") believes 'Kids need to grow up.' Adults and classmates alike are astonished when Max is tapped to save his own creation, Planet Drool, by his summertime companions in "The Adventures of Sharkboy & Lavagirl in 3-D.' After wringing the "Spy Kids" movies dry, writer/director Robert Rodriguez ("Sin City") turns to the dreams of his 7 year-old son Racer for his next kids' flick. Please let this one end here. Mind-numbingly boring and woodenly acted, it is surprising how often these adventures rip off classics like "The Wizard of Oz" and "The Phantom Tollbooth" with such deadly results. Rodriguez shapes a story about the importance of dreams and creativity around Max, a boy based on his son, and the titular characters Racer came up with. The film is actually somewhat entertaining in its opening moments, which describe how Sharkboy (four-time Junior World Champion martial artist Taylor Lautner) came to be. Sharkboy was raised with sharks that look like they swam out of "Elf's" North Pole and act like Flipper, subjects of his missing dad's studies. The less interesting Lavagirl (newcomer Taylor Dooley) has purple flames for hair (actually just dyed) and molten skin (actually just gleaming rivulets on her suit) and an annoying need to 'know where she comes from,' that her talents are not just destructive. The duo arrive in an Ozian tornado after class bully Linus (Jacob Davich, "The Aviator's" young Howard Hughes) steals Max's dream journal and systematically begins to deface it, causing Planet Drool to gradually go dark. Max must reimagine things while up against Mr. Electric (the film's coolest visual - George Lopez's head floating within a Robbie the Robot-like computer creation like The Wicked Witch of the West within her own crystal ball) and his plug hounds and Planet Drool's reinvention of Linus as Minus. Planet Drool (The press notes mention that Racer chose this name because it rhymed with cool - and here I thought the Rodriguez clan was making a creative reference to drooling on one's pillow while asleep) is composed of amusement parks and cuckoo clocks and given names that harken back to "Phantom Tollbooth," but there are also cheesily imagined places like the third rate 'land of milk and cookies' and a crystal palace ruled over by an Ice Princess (Sasha Pieterse) who is really Max's schoolroom crush, Mr. Electricidad's daughter Marissa. The film looks murky and the 3-D effects are not worth the headache induced by the spectacles one must wear in order to see them (and, of course, the film cannot really be watched without them either). Boyd shows some amount of spark as Max, but the newcomers playing the super heroes are rank amateurs. Kristen Davis is awful, neither maternal nor natural. Lopez is grating once one has absorbed his cool reincarnation. "The Adventures of Sharkboy and Lavagirl in 3-D" is a cool title in search of material to back it up. The Rodriguezes are subjecting everyone to their own home movie.

Multi-hyphenate filmmaker Robert Rodriguez has created an amazing empire catering to his own particular whims ever since his breakthrough, no-budget debut, “El Mariachi.” That little hit spawned the remainder of his Mexican trilogy (“Desperado” and “Once Upon a Time in Mexico”) and allowed him to create his extraordinarily successful “Spy Kids” franchise, which ended with “Spy Kids 3-D: Game Over” where Rodriguez got his taste for three-dimensional filmmaking. In The Adventures of Shark Boy and Lava Girl in 3-D” he has joined forces with his young son, Racer, to bring a child’s dreams to the big screen. Some dreams, however, are better left unrealized. I won’t go into the story in any detail just because it is too disjointed and mostly a visual roller coaster ride augmented by wearing the silly 3-D glasses. The film is populated by a gaggle of children that apparently have no prior acting experience before appearing in “The Adventures of Shark Boy and Lava Girl in 3-D.” Cayden Boyd, Taylor Lautner (Shark Boy) and Taylor Dooley (Lava Girl), along with the rest of the kid cast, are two-dimensional stick figures mired in a sea of in-your-face digital special effects. Technically, the film is innovative, but the lack of believable (or, even likable) characters (with one exception: George Lopez in the combined role as schoolteacher, Mr. Electricidad, and the big bad guy, Mr. Electric) is a definite turnoff for parents burdened with taking the younger kids to this painfully boring (for anyone older than a tyke) movie. The only draw to see “The Adventures of Shark Boy and Lava Girl in 3-D,” and only if you are 7-years old or less, is the high gloss special effects and the chance to experience a 3-D movie. For the rest of us age 8 on up, I advise you to find a volunteer to shepherd the little ones see this and go take in something, anything, else instead. The tykes might like it but