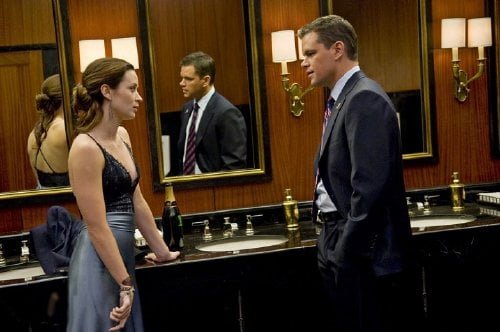 David Norris (Matt Damon) is New York's youngest Congressman whose lead in the Senate race is cut short when more of his bad boy antics hit the press. On election night, he meets Elise Sellas (Emily Blunt, "The Young Victoria," "The Wolfman") in the men's room and the spark between the two is unmistakable. Inspired, David gives such an impressive concession speech, he becomes the leading candidate for the next race. But on the glorious day David once again finds Elise, he discovers he was never supposed to see her again when he steps into his former campaign manager Charlie's (Michael Kelly, HBO's 'The Sopranos,' "Changeling") office and finds him frozen in time, his thought processes being modified by "The Adjustment Bureau."

Screenwriter George Nolfi ("Ocean's Twelve," "The Bourne Ultimatum") makes his directorial debut adapting the Philip K. Dick short story "Adjustment Team" but lets the material run away with him. What begins as an intriguing concept rapidly becomes silly. It's a shame because stars Damon and Blunt spark some real chemistry and Blunt's intense training for her role as a contemporary ballet dancer really paid off. David tries to outrun the men in black but they have a secret network of doorways that make that nearly impossible. Once he's caught, team leader Richardson (John Slattery, AMC's 'Mad Men') explains to him that the Bureau needs to ensure that everyone stays on the plan as written by the Chairman, because past experiments with Free Will led to the Dark Ages and World Wars. Therefore, he warns, if David reveals them he will be 'reset,' having his memory wiped clean. Later, at his Brooklyn Ice House hangout (where, oddly, Jennifer Ehle of "The King's Speech" is the bartender), David's surprised by a visit from Harry Mitchell (Anthony Mackie, "The Hurt Locker," "Night Catches Us"), the adjuster who messed up allowing him to run into Elise and then walk in on the team in action. Harry tells him that humans are protected from Bureau meddling by water and tells him to meet him on the ferry. There Harry explains the situation a little more sympathetically. David asks Harry if he's an angel (he does appear to be playing Cupid), but is told that he's more like a case worker with a really long lifespan. And so David spends years trying to find Elise again and when he does Richardson and 'the hammer,' Thompson (Terence Stamp) keep trying to separate them. David learns what it will mean if he stays with Elise and lets her go, but he cannot forget her and when he sees her wedding announcement, it's time for the film's big climax. Basically a romantic thriller with a fate vs. free will theme, "The Adjustment Bureau" gets lost in its own mechanics. The adjusters carry around books with moving lines and symbols that look like something from "Harry Potter" and we're told they can only use their doorways if they're wearing their hats. Once Harry teaches David how the doors work the film turns into a low rent "Inception," where one can leave MOMA and suddenly be in Yankee Stadium. The lovers are finally caught on a rooftop in a scene that recalls Dorothy and company being trapped by the Witch's guards in "The Wizard of Oz." Really, it's hard to repress the giggles, which I'm sure was not the intent. The screenplay also overlooks such obvious questions as to why Elise never elects to contact David - he cannot find her because her number is taken and he never knew her last name, but this guy's a politician. And of course, the fate of Elise's intended is dropped like a stone. The film's problems do not lie with its cast, further evidence that Matt Damon is one of our very best actors, a charismatic Everyman. Nolfi cannot modulate the tone of his film, but he could get Damon elected to public office.