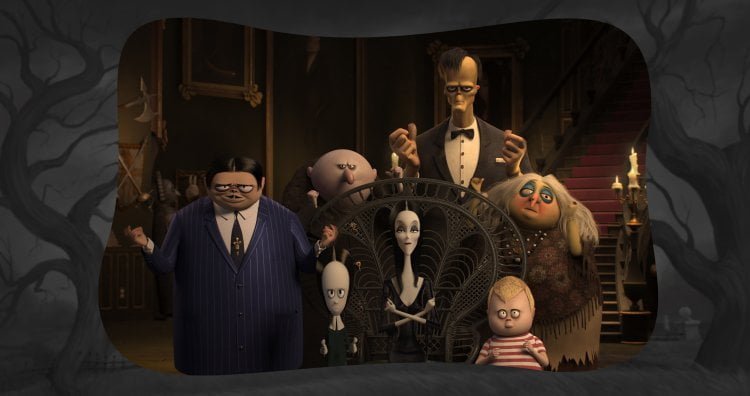 I can imagine, without looking, that the Addams Family theme song, starting with “They’re creepy and they’re kooky…,” will be played to death in the coming days. For those not familiar with that refrain, it heralds the latest coming of “The Addams Family.”

After being driven away by a torch and pitchfork wielding mob immediately after their nuptials, Gomez (voice of Oscar Isaac) and Morticia Addams (voice of Charlize Theron) hit something on a windy, foggy road. The creature straight jacketed in material stamped ‘State Hospital for the Criminally Insane’ is immediately recruited as their butler and when they spy the now abandoned asylum at the top of a hill, Gomez and Morticia know they’ve found a home for “The Addams Family.”

After the 1960’s television series, two short-lived animated television series and the 1990’s movie treatments, co-directors Conrad Vernon and Greg Tiernan (who also cowrote with Matt Lieberman) have gone back to the original Charles Addams black and white cartoon single panels to relaunch his spooky all American family with an origin story. But that origin story is told before the film’s opening credits, a ’13 years later’ title card transitioning us into the fully formed family and a been-there, done-that plot. There’s little fresh here and of the star-studded vocal cast only Oscar Isaac and (especially) Nick Kroll (Uncle Fester) get the spirit of their characters right. Worse, the very core of Addams Family magic – the highly charged eroticism of the Gomez and Morticia marriage combined with their offbeat parenting skills – is nowhere to be found. Fans of the original series will be dismayed to see Itt spelled It (yes, as captioned in an Addams panel) and hear not one word of French, let alone any evidence of Morticia’s ‘smoking’ or Gomez retrieving a pre-lit cigar from his jacket pocket.

The story has three main plotlines. At the foot of the hill where the Addams’s live, Margaux Needler (voice of Allison Janney) of television’s ‘Design Intervention’ has created a town named Assimilation where she hopes to make a killing selling identical homes. When the fog clears one day, Margaux is dismayed to view the Addams’s distinctly off brand abode. The situation becomes more urgent when she learns the extended Addams family will be arriving to celebrate Pugsley’s (voice of Finn Wolfhard) coming-of-age ritual, the Mazurka, an intricate sword dance symbolizing a man’s ability to defend his family. Meanwhile, Wednesday (voice of Chloë Grace Moretz) has grown bored within the confines of her home and so befriends Margaux’s daughter Parker (voice of “Eighth Grade’s” Elsie Fisher), alarming her mother to no end when she develops a fondness for unicorn hair barrettes and the color pink in general. A subplot has Fester falling for the villain as he has in numerous prior iterations. The film devotes a good chunk of its 87 minute running time – twice – to recreating the television series’ theme song.

Repeating previous plots wouldn’t be a problem if they were treated with more wit. After all, the 1964 Filmways, Inc. series leaned on basic sitcom plots of its time. It was the delicious characterizations and demented details that made the series so ahead of its time. Here we get Wednesday’s braided pigtails refashioned as nooses and It (voice of Snoop Dogg) arriving in rap star style. There are two honest laughs to be had here, one very early visual gag of disembodied hand Thing viewing feet pictures on a laptop, another Lurch’s (voice of Conrad Vernon) unexpectedly high cover of REM's 'Everybody Hurts.’ The characterizations of various members of the extended family lack imagination. Gomez and Fester fare the best in their CGI incarnations, Morticia too sharply drawn, her movements too simplistic.

There’s nothing really wrong with this latest interpretation of “The Addams Family,” but there’s nothing particularly ooky about it either. It’s serviceable.

I think that there are two camps, maybe three, that have their own view of just what is The Addams Family. The obvious ones are those who love and enjoy the original Charles Addams cartoons that have been with us since its origins in 1938. The other camp, of which I proudly hail, is for the original TV series, starring Caroline Jones and John Astin, which first aired in 1964. Oh, and the third might be for the fans of the 1991 live action remake starring Angelica Huston and Raoul Julia – though those fans probably are for either the cartoons or the TV series.

This time around has our lovable little family being hounded and attacked by the local population in the Old Country. They flee to the safety and protection of…New Jersey! Once there, Morticia Addams (Charleze Theron) tells her loving husband, Gomez (Oscar Isaac), that what she wants most is a home for her growing family. An abandoned insane asylum in the nearby town of Assimilation is available and it is perfect for the creepy and kooky family.

This lays the groundwork for what the filmmakers hope will be a new money-making franchise. There is a ready made audience, whichever camp you are in, so brand identity is immediate. But, I ask, is there a market for a fresh reboot of the Addams Family?

This latest addition to the Addams legend matches the spirit of the original characters made up by Charles Addams. The family has been living peacefully and happily in Assimilation for the past 13 years. The town is a designed community by reality-TV star and builder Margaux Needler and is ready for her biggest project to date – the renovation of the Addams manse. This leads to a battle of wills between the Addams and greedy, ratings-crazy Margaux.

But this crisis should only take about 30 minutes to resolve so the storytellers open up the formula idea package and add a few more issues to resolve. Wednesday Addams (Chloe Grace Moritz) is of an age when she is bored with her family and wants to explore new horizons, like middle school, clothes and friendship. And, young Pugsley (Finn Wolfhard) will soon face his big coming of age day. Plus, the entire Addams clan is converging on the town for that big day. That is enough stuff to fill up the under 90-minute runtime.

As a big fan of the 60s sitcom, this latest rendition lacks the nutty wit and inherent sexiness of that iconic TV series. “The Addams Family (2019)” has more akin to the one frame gags of Charles Addams cartoons and, as such, does that quite well. It may not grab the old fans, but it does open it up to a new younger audience that holds allegiance to no camp.