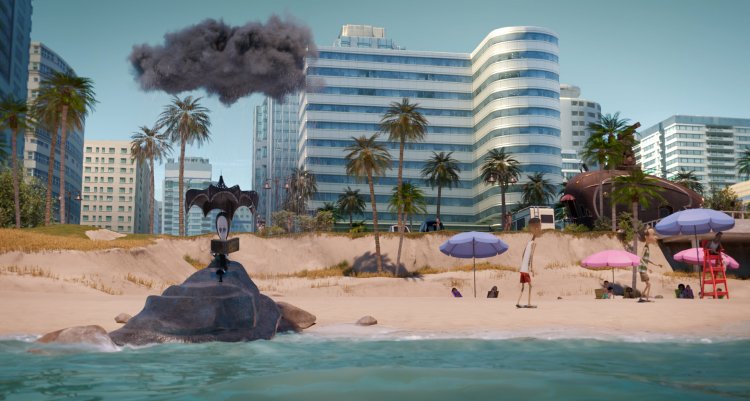 After Wednesday (voice of Chloë Grace Moretz) makes a big splash at her science fair by transferring the ‘brain’ of her pet octopus Socrates into Uncle Fester (voice of Nick Kroll) she’s dismayed that everyone receives a participation trophy and rejects Gomez’s (voice of Oscar Isaac) attempts to shower her with affection.  The patriarch decides the family should indulge in together time by taking a road trip to Death Valley, but just as they are about to depart, a lawyer (voice of Wallace Shawn) and his huge henchman Pongo arrive stating his client believes his own daughter and Wednesday were switched at birth.  The trip turns into a chase with a tail in “The Addams Family 2.”

As a huge fan of both the original Charles Addams drawings and the original television series, I was not taken with the first of this animation franchise, but while the sequel has some of the same drawbacks (the voice casting of Charlize Theron and Grace Moretz as Morticia and Wednesday, for one), new "Pokémon Detective Pikachu" writers Dan Hernandez and Benji Samit have introduced a bit more originality into a story that invites all kinds of wild production design.  Of course some new issues have also been introduced, like the sacrilegious depiction of Morticia Addams wearing pants and the sight of she and Gomez lying on a sunny beach, however well protected, but on the whole this effort is funnier and an improvement over the first one.

The family is diverted from their first planned stop, Salem, by Fester, who apparently got more of Socrates than its intellect, his arm now a tentacle, his desire for water bringing them to Niagara Falls.  There, Fester attempts to give Pugsley (voice of Javon 'Wanna' Walton, replacing Finn Wolfhard) dating advice, but his sister upends his spiel with a spell.  That night, when Fester’s tale of juggling babies in the maternity ward gives credence to the lawyer’s claim, Wednesday overhears the whole conversation and is quite taken with the idea that she is not an Addams (a perplexing turn of events similar to the first film’s).  After Gomez enters her in the Little Miss Jalapeno pageant, she’s had quite enough (her retribution is Carrie-esque) and sets out with Lurch (voice of Conrad Vernon) for Sausalito and the home of Professor Cyrus (voice of Bill Hader), who appeared holographically at her science fair and is presumably her real dad.

"The Addams Family" directors Greg Tiernan & Conrad Vernon set a spritely pace and vivid production.  The towering Gothic ‘camper’ the family hits the road has an interior featuring stained glass windows, a roaring fireplace, mounted stag head (how mundane!) and Hawaiian hula dancer on the dashboard.  It’s driven by Thing wearing his ‘Eye’-watch while trying not to nod off to Gordon Lightfoot.  Every stop along the way is distinct, Gomez buying hundreds of pounds of fish to plunge over the Falls in a barrel, the ‘Alamo’ a tacky motel featuring the pageant for little girls (another chance to dress Wednesday up in pink, this time involuntarily).  Wednesday and Lurch have a run in with a motorcycle gang in a dive bar where her threat of Lurch showing them 'what his cold, dead hands can do' goes amusingly off the rails even if the gag is recycled from the first film. But by the time they all meet up in Sausalito, the film begins to resemble “Despicable Me,” a film which, ironically, borrowed more than a bit from the Addams.

Back home, Grandma’s (voice of Bette Midler) shenanigans appear to exist merely to set up a Snoop Dog song (the rapper voices Cousin It).  And that lawyer’s henchman, Pongo, who clearly has a past with Lurch, could have been integrated into the story with a bit more wit.  But as it stands, “The Addams Family 2” shows signs of a franchise righting its ship.