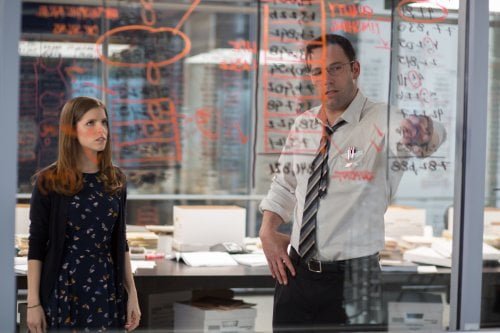 Chris Wolff (Ben Affleck) is a talented high level accountant called into Living Robotics, a huge hi-tech company owned by Lamar Black (John Lithgow). Chris is hired to find out where $61 million had gone and sets out to uncook the company’s books. What he finds is far more criminal and insidious than anything before seen by “The Accountant.”

Treasury Department’s Crime Enforcement Division Director Ray King (J.K. Simmons) is nearing retirement but has one case nagging at him, an unknown black money man seen repeatedly in surveillance photos with global criminals. He blackmails analyst Marybeth Medina (Cynthia Addai-Robinson, "Columbiana," Starz's 'Spartacus'), who lied on her employment application, giving her a limited time to find "The Accountant." After breaking through with Indie hit "Tumbleweeds," director Gavin O'Connor ("Miracle," "Warrior") has taken a decidedly macho turn, favoring meat and potatoes films where tough guys, often within the same family, face redemptive challenges. His latest, written by Bill Dubuque ("The Judge"), holds to the formula while also offering a double twist of cat and mouse thrills. Ben Affleck is well suited to the role of the autistic accountant, strong, silent and smart with just the right amount of self-taught emotional response. We're introduced to Chris Wolff not with a Mexican cartel leader or Mafia crime lord but in his strip mall CPA office, ZZZ Accounting, advising farmers Frank and Dolores Rice (Ron Prather and Susan Williams) on their taxes. He returns to an unexceptional ranch house, albeit so precisely he clears his opening garage door by a fraction of an inch. His kitchen drawer holds only the three neatly lined up utensils he uses. An emoticon chart hangs inside his rigorously organized closet. A flashback reveals him as difficult-to-control child whose affliction drove his mother to leave and his ex-military dad to train him and his brother in killing arts as a coping mechanism. But Chris has another 'residence,' a custom Airstream trailer kept in a storage locker stocked with an arsenal of weapons, passports with multiple aliases, cash of many currencies, a Renoir and Pollock gracing its walls. Feeling the heat, Chris takes a legitimate contract with Living Robotics. Its gregarious and charitable minded CEO Lamar Black (John Lithgow) welcomes him with open arms, but it's Lamar's CFO sister Rita (Jean Smart, TV's 'Fargo') who called him in to trace the $60 million plus that's disappeared from the books. He's provided a glass walled conference room with junior accountant Dana Cummings (Anna Kendrick), the employee who initially noted the disparity, to assist him, but Chris rebuffs the bubbly young woman's attempts to help. She's intrigued by this man of few words and the next morning when she realizes he's managed to do in one night what would have taken her years, their mutual math geekery sparks mutual admiration. But just as Chris is about to solve the challenge (his Aha! moment is explained to Dana using New York's Crazy Eddie electronics empire) he's unceremoniously fired by Black. Reeling from his inherent need to finish a job, Chris goes out to target shoot in the Rices' back field, only to encounter assassins. He then manages to save the unsuspecting Dana just as she's about to be hit by two 'delivery men' in her apartment, frustrating Brax (Jon Bernthal, "Fury," "Sicario"), the leader of the operation. Dubuque's connected his dots in interesting ways, ties to the past slowly becoming evident. Through the use of flashbacks, we not only see Chris's family upbringing but his mentoring by black money accountant Francis Silverberg (Jeffrey Tambor), who becomes a second father, during a stint at Leavenworth. But it is in the details that the filmmakers really excel here, Chris's autistic workarounds and their breakdowns revealing more than his few words. Affleck's completely convincing, meticulously rigid with his character tics, his romantic display towards Kendrick's Dana more touching because of its restraint. He can also kick ass, unarming a hit man with a twirl of a belt. Kendrick's a charming romantic foil, Bernthal a killing machine. Simmons comes into his own when his connection to Wolff's past is revealed, but Addai-Robinson is a cog in the filmmakers' machine and Lithgow immediately draws suspicion. "The Accountant" is an adult popcorn thriller that gets more mileage out of its hero's affliction that its last twist, but that's not a bad thing. Here character trumps plot. Grade:

Chris was diagnosed, as a boy, with autism. His career Army dad uses military training as the treatment for his son’s condition so Chris can live a “normal” life. He has an affinity for mathematics and becomes a top accountant for organized crime. He acquires great wealth and gets out of crime accounting to go straight, thus the job with Living Robotics. He also has another gift: he, because of his father’s training, is a top assassin. Dana Cummings (Anna Kendrick) is the accountant at the company who first discovers the missing millions and she is assigned to assist Chris. The socially stilted freelancer does not want any help and, after going through 15 years of company accounts in a single night, discovers where the money went. This begins a tale of corruption and murder at the highest corporate levels. Director Gavin O’Connor has a penchant for action films with such works as “Miracle (2004),” “Pride and Glory (2008),” “Warrior (2011)” and the pilot episode of “The Americans (2013).” So, with “The Accountant,” he again shows his action chops and, with the script by Bill Dubuques, comes up with story about international corporate corruption where hit men, not negotiators, take care of business. Wolff is a one-man army and, when Dana’s life is threatened, uses his certain set of skills to protect her – with a body count that rivals “Taken (2008).” The titular character, as played by Ben Affleck, is autistic but highly functional as math savant and killer. Affleck captures the many ticks of an autistic person and this is made evident in the scene where he is going through the books and covering any surface available in a conference room with all the figures and calculation. His single purpose approach to the investigation rings true. The supporting cast is a Hollywood who’s who of veteran actors. Anna Kendrick, a most likable actor, is solid as Dana. Hers is a tough job as she plays the damsel in distress. This one note character is fleshed out to full dimension by Kendrick. Jeffrey Tambor, as Chris’s mentor in prison, gives an effective and empathetic performance as the man who took the accountant under his wing when sent to prison at Leavenworth. His storyline is small but very important to the overall tale of vengeance. J.K. Simmons, as Raymond King, is the head of the government investigation into corporate fiscal corruption. Cynthia Addal-Robinson plays King’s chief investigator, Marybeth Medina and the one who uncovers Chris’s true identity. John Bernthal, in a parallel story line, is a high level hit man with a secret. The filmmakers give the many characters full shrift with well thought out plot lines, and there are many. “The Accountant” is a well done action thriller that never lets up on its fast pace and mayhem. It seems that it should have been released for the summer season with the rest of the action films. But, it lands on the cusp before all the Oscar-touting films come out it, filling the void between seasons at the multiplex.