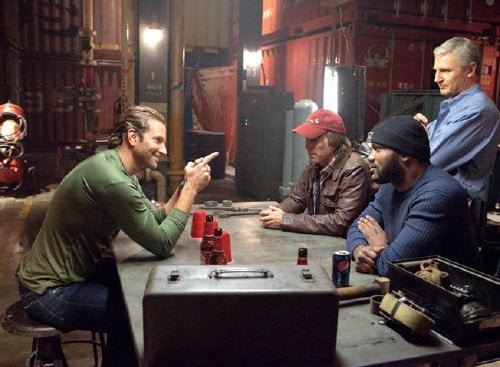 Four veterans of the Iraq War have fallen from grace in the eyes of the US military. Falsely accused of crimes they did not commit, the warriors must clear their name, becoming mercenaries for hire as “The A-Team.”

When 30 billion dollars and U.S. mint plates formerly under Saddam Hussein's control fall into the wrong hands in Baghdad, General Morrison (Gerald McRaney, TV's "Major Dad") knows just who to enlist to get them back - "The A-Team." Cowriter (with Brian Bloom and Skip Woods)/director Joe Carnahan knows how to develop characters and situations with humor, but with "The A-Team" he makes the same misjudgments that made his last film, 2006's "Smokin' Aces," ultimately fail. He just doesn't know when to let up. With a sound mix that's so busy it frequently overpowers the dialogue, an editing style that suggests action rather than shows it and a plot that has at least two two many players in the double crossing game. The new team is well cast and appear to be having fun, but for every good gag - like Baracus's (WWFer Quinton 'Rampage' Jackson) Murdock (Sharlto Copley, "District 9") induced fear of flying - there's one that falls flat (coconut curry tapenade is only funny once). Liam Neeson ("Taken," "Chloe") is the cigar-chomping Hannibal Smith who, in the film's beginning, is out to rescue fellow Ranger Face (Bradley Cooper, "The Hangover"). Along the way he conscripts Baracus's van and discovers another. At a military hospital, he finds mental patient Murdoch, crazy but a crack pilot. The A-Team is complete. As Face's former flame Charisa Sosa (Jessica Biel, "The Illusionist") puts it, they're the best clandestine unit the Army's got and they specialize in the ridiculous. This would include the truly witty stunt of 'flying' a tank. But then Carnahan does what he does best - screws the pooch with CGI work so bad you can practically see the green screen. A Frankfurt bank heist features 5-10 minutes of gunfire and exploding skyscraper windows before the cops show up. Baracus recovers a suitcase from heavy traffic in a sequence edited past all comprehension. The big climax, presumably built upon a sleight of hand game of cups and balls, loses its own concept amidst exploding chaos. Earlier this year, the lower budgeted (and VERY similar - runway standoff, check; sniper shooting into skyscraper, check; south of the border beginning, L.A. port finale, check) "The Losers" got so much of this right. Carnahan seemingly understands fun, but his filmmaking style sucks its essence out. When C.I.A. operative 'Lynch' (Patrick Wilson, "Watchmen") is taken away, a new 'Lynch' shows up to take his place. "Mad Men's" Jon Hamm cameos in the role, a casting stunt that tries and fails to get a laugh. If he's setting himself up for the sequel, he better make sure he gets a better director.

Having never watched the original TV series, I walked into the screening of “The A-Team” with few expectations. And, for about the first half, the Team faces one dangerous encounter after another when assigned the mission to capture a massive Iraqi counterfeiting operation that would flood billions of faux dollars into the US economy. They are successful, only to be duped by a group of American mercenaries with their own goal – take the counterfeit plates and start up their own fake dollar production. This plot becomes the meat of the bulk of the film. The action is frantic and fun, for an hour or so, with high-powered helicopter chases, pursued by unmanned air vehicles firing rockets left and right and the one set piece that proved unique to action films. During their daring escape on a C-130 transport plane, the UAVs close in on the team and they forced to bail out – in an A1M1 Abrams tank hanging from three huge parachutes. The Team does battle with the unmanned planes and use the Abrams awesome cannon to maneuver the huge tank floating to ground. Very cool and exciting. The A-Team reprises the characters from the original show with Liam Neeson taking on the role of cigar chomping Col. Hannibal Smith. Bradley Cooper plays the handsome, cocky Face; Quinton “Rampage” Jackson reprise the Mr. T character, B.A Baracus; and, South African actor Sharlto Copley plays the crazy uber-pilot Murdock. Joining the A-Team are Jessica Biel as straight-lace (and Face’s former lover) Captain Charisa Sosa, Patrick Wilson as the sneaky, conniving CIA spook, Lynch, Gerald McRaney as General Morrison and Brian Bloom as renegade merc, Pike. All do yeoman’s work but take a back seat to the copious CGI action. As said, the first half is fun and furious but, as the climax approaches, any semblance of story is supplanted by the long, long final shootout that has more explosions and large scale bombast per square inch than all of the rest of the action combine. As is typical of director-co-writer Joe Carnahan, if one explosion is exciting, then hundreds must make the film hundreds of times better. It does not and the last third of “The A-Team” is an explosive cacophony that is a mish mash of rapid editing and lots of giant cargo containers going up in special effect blasts and flames. More is almost never better and this remake falls flat in its conclusion. And, the stage is set for the sequel – just in case. Fans of the old 70’s TV show and the 14 to 24 action-loving demographic will likely eat up the new “A-Team” with a spoon. For those of us who enjoy good movies and plausible plot lines, wait to see it on cable or rent it cheap. Or, just avoid it.