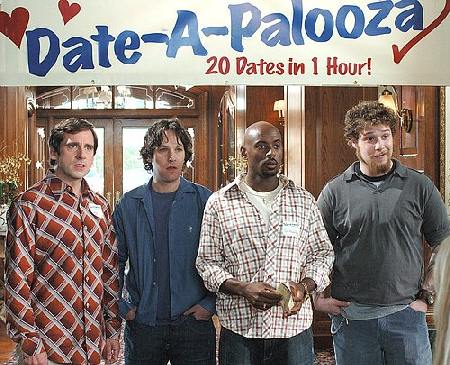 Andy Stitzer (Steve Carell) collects action figures, loves playing video games, works in the stockroom of an electronics superstore, rides a bicycle (he can’t drive a car, yet) and has never had sex. But, he’s not some hormonal-imbalanced teenager, he’s “The 40-Year-Old Virgin.”

Andy Stitzer (Steve Carell, "Anchorman: The Legend of Ron Burgundy," "Bewitched") lives alone in an apartment crammed with collectible action figures and rides his bicycle to work at the Smart Tech electronics store where he's viewed as slightly odd by his somewhat distanced coworkers. A rare invite to join them in a poker game provides Andy's coworkers with both fodder for jokes and a unifying mission when they find out that Andy is "The 40 Year-Old Virgin." "The Wedding Crashers" may have the bigger names, but "The 40 Year-Old Virgin" is the better film. Working from one of Steve Carell's old Second City sketches, the star and "Freaks and Geeks" producer/writer Judd Apatow (making his feature directorial debut) pack their film with plenty of raunch, but never at the expense of the film's generous heart. Andy Stitzer is a recognizable human being buttressed by a posse of cluelessly over confident lotharios. 'That boy needs to get laid,' the retired upstairs neighbor tells his wife as Andy dons his helmet, tucks in one pant leg and mounts his bike for another day at work. But Andy thinks he's content with his life, having given up on sex after a few disastrous encounters. He's ready to quit his job once the whole store knows about his condition, but a heartfelt conversation with David (Paul Rudd, "The Shape of Things," "Anchorman: The Legend of Ron Burgundy") convinces him to perhaps try anew. The advice that's heaped upon him, though, is questionable. Dave is a mess two years after breaking off a four month relationship with Amy (Mindy Kaling from the American "The Office"). Jay (Romany Malco, "The Chateau," SHOtimes "Weeds") cheats on his girlfriend every chance he gets and Cal (Seth Rogen, TV's "Freaks and Geeks," "Anchorman: The Legend of Ron Burgundy") is a youthful horndog who thinks Andy should practice with 'hood rats' before making love to a woman he likes. That would be Trish (Catherine Keener, "The Interpreter"), the age appropriate woman from the 'We Sell Your Stuff on eBay' store across the way, whom Andy begins to date despite his helpful friends. Even better, Trish takes the pressure off, proposing they not have sex for three dates. Without divulging his secret, Andy trumps her to twenty, but when the day approaches his new maturity and confidence are abandoned in panic. One of the main reasons "The 40 Year-Old Virgin" works so well is the carefully assembled group of guys star Carell is surrounded with, a trio with more chemistry with each other than with the opposite sex. There are no cameos of overexposed and obvious comedy stars to be found here, only genuinely funny actors acting like real guys. Jay tells Andy he must 'tackle drunk bitches' in a bar full of babes. The foursome hook up with a bachelorette party and Andy leaves with Nicky (Leslie Mann, "Stealing Harvard"), but his lack of a car means she must drive and this is a chick with a blood alcohol monitoring device attached to her dash (this is one scene that drags on too long, but it ends with a one-two punch). Cal advises to keep asking questions because women like to talk about themselves and Andy's seductive ambiguity hooks bookstore clerk Beth (Elizabeth Banks, "Seabiscuit," "Heights"), but she turns out to spike the kink'o'meter. Dave donates his box of porn, but after all his mood setting for a night of self-love (candles, fresh pajamas), Andy picks a tape of "Everybody Loves Raymond." Steve Carell, who made a big impression in a small role in 2003's "Bruce Almighty," now proves he's quite capable of carrying a film. In both writing and playing Andy, Carell wisely makes him a well-scrubbed uber-geek, but never so weird that he becomes creepy. His deadpan verbal delivery of meaningless soliloquies is here in a recounting of a weekend's obsession with egg salad and his physical ability is also worked, sitting ramrod straight at his breakfast table or running like a gym class team reject. Kudos too to his sacrificial offering of chest hair in a waxing scene that's as funny as it is real. Rudd's introduced having a meltdown with boss Paula (Jane Lynch, "A Mighty Wind") over her inflexible choice of a Michael McDonald live DVD for store demos. His pasty, unkempt appeal is perfect for Dave's lovelorn loser. The best sidekicks-only scene involves Rudd and Rogen ensconced in Andy's game chairs, playing at 'know why you're gay' during violent one-on-one videogame combat. Seth Rogen, memorable as a flaky cameraman in the dull "Ron Burgundy," has his breakout role here. Malco is the slick and hip member of the squad who must endure Andy's attempted Black slang. Lynch is almost a member of the guys, giving Paula square-shouldered authority and Andy pats on the back that border on sexual harassment. It's a bit alarming to consider Catherine Keener a 'hot grandma,' as this film does, but Keener's up to the job, a sexy woman unafraid to show her laugh lines. Keener makes Tricia a perfect mix of hopeful confidence and single mom frustration and her acceptance of Andy as just a nice guy works. She provides much of the film's warmth. Kat Dennings (TV's "Raising Dad") is good as her rebellious sixteen-year old who grudgingly accepts mom's boyfriend. Miki Mia is amusing barely suppressing her own laughter in her debut as 'Waxing Lady.' "The 40 Year Old Virgin" is one of those rare R-rated comedies that can be described as sweet. As if that weren't enough, it's capped by a brilliantly looney lip-synched rendition of "Aquarius" that begins in Andy's bed and ends as a free-spirited dance by reassembled cast members.