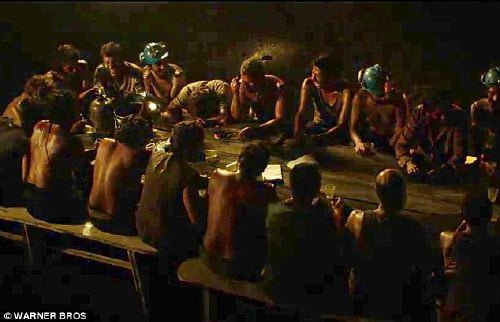 In 2010, a disaster at Chile's San Jose Mining Company quickly brought family members and friends to its closed gates. The company was antagonistic until Minister of Mining Laurence Golborne (Rodrigo Santoro, "300," "Focus") stepped in, bringing in engineers and massive drills to try and reach the men who were trapped 200 stories beneath a megaton boulder in 100 degree heat. Underground, Mario Sepúlveda (Antonio Banderas) took on an increasingly difficult leadership role as he tried to sustain the minds and bodies of "The 33."

With one exception, director Patricia Riggen ("Under the Same Moon") follows a pretty standard playbook, making this a mediocre cinematic experience despite its dramatic real life events. Adapting Hector Tobar's 'Deep Down Dark,' screenwriters Mikko Alanne, Craig Borten ("Dallas Buyers Club") and Michael Thomas ("The Devil's Double") establish the miners celebrating one of their own's retirement (oddly, as he travels with them down into the mine the next day), foretell the tragedy when supervisor Don Lucho (Lou Diamond Phillips) notices and reports warning signs that are brushed off, then quickly hit us with the cave-in. The men can't get out the way they got in, so resort to fleeing to their refuge deeper down, a break room of sorts housing emergency supplies and a communication tie to the office. Of course, what they find are some rusty cans of tuna and a non-working phone. As usual, one of their own decimates the food supply. Most of the drama swings between the escalating human tensions down below with the technical frustrations being faced above with a few side trips to the camp set up by those awaiting news of survivors. After an initial, violent clash with Golborne, the town's empanada maker, María Segovia (Juliette Binoche?!), acts as liaison for the families while her estranged drug addict brother goes through withdrawal down below. The miners get their comedy relief from the plight of Yonni Barrios (Oscar Nuñez, TV's 'The Office'), the 'Cassanova' whose wife (Adriana Barraza, "Babel") and mistress fight for camp rights above. Álex Vega (Mario Casas) begged for the opportunity to work that fateful day to feather the nest for his expecting bride. A Bolivian new to the crew (Tenoch Huerta, "Güeros") is regarded with so much suspicious hostility by the others, Sepúlveda has to guard him from harm. Once the miners can communicate with their rescuers, even their leader, 'Super Mario,' comes under fire for having been offered a lucrative book deal. The film's one outstanding moment comes as the men gather, Last Supper style, for a meal stretched too thin. Riggen makes the scene hallucinatory, reflecting the men's desires against their current circumstances. Otherwise, the film ticks off its checklist, chief engineer Andre Sougarret (Gabriel Byrne) struggling with the technical difficulties of getting his drill to just the right spot through unstable rock. That must be the reason James Brolin is here as an American who comes up with the answer. "The 33" flits about painting its dramatic tale with broad strokes, never applying finer details, like the politics involved. Golborne took a huge risk, but we only see its payoffs. The mine company in question is cast as a villain early on, never mentioned again until closing credits inform us they got off with no liability. Miraculously, all the men were freed, here looking powder fresh and blow dried after 69 days in hell. Grade: