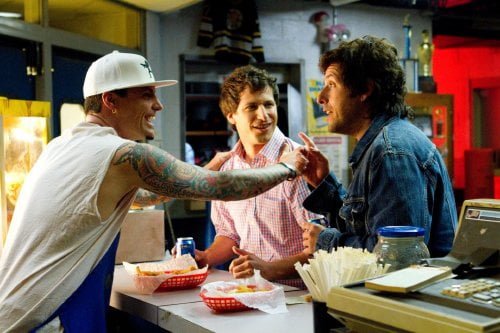 In 1987, 13 year-old Donny Berger (Justin Weaver) became a celebrity after it was discovered he had impregnated his ultra-hot teacher Mary McGarricle (Eva Amurri Martino, "Saved!"), who went to jail for thirty years for her crime. Somehow Donny got custody of their son, who he named Han Solo, but Han ran away as soon as he turned eighteen. Having burned through all his teenaged wealth, Donny's in trouble with the IRS, so he agrees to a reality show reunion. Now he's got to get his successful son, renamed Todd (SNL's Andy Samberg), to leave his wedding weekend to visit the Massachusetts Correctional Institutional for Women in "That's My Boy."

Adam Sandler is my Achilles Heel. I find it hard to hate his movies (atrocities like "Little Nicky" and "Grown Ups" excepted), even though I detest the type of tasteless juvenile humor he wraps them all up in. There's that core of sweetness just below the surface. Just look at the tolerance spread around here - to fat women, to old women, to old Black strippers, to alcoholic losers, to washed up entertainers like Vanilla Ice. Sandler is sentimental, and this Father's Day weekend release isn't the first to celebrate a type of irresponsible parenting sprung from a well meaning heart (see "Big Daddy"). "That's My Boy" isn't "Happy Gilmore" or even "The Waterboy," but it's got its moments. The first hurdle presented here is that old debate - is an underaged boy, here Sandler's 13 year-old incarnation - truly a victim of rape if he has sex with a teacher or is he the hero of every adolescent boy's fantasy? (The answer is, of course, the former, but the filmmakers so gleefully embrace the latter and build the entire film around the concept that any further investment requires you to just go with it. They turn young Donny into a current day incarnation of the Woo Woo Kid). Jump ahead almost thirty years and Donny, now played by Sandler in a Bahston-accented 'funny' voice and bad wig, is facing three years of jail time if he can't come up with $43K by week's end. Cut to the sprawling seaside home of Todd's boss Steve Spirou (Tony Orlando!), where Donny arrives to greet the bride with a raunchy Spencer's gift and story about being Todd's best friend. The scruffy stooge freaks his son out, but becomes a bit hit with Todd's future in-laws and especially Spirou's mom Grandma Delores (Peggy Stewart, "The Runaways"), a randy former swimsuit model. And of course, there's something fishy about the dishy Jamie (Leighton Meester, TV's 'Gossip Girl') hooking up with the hyper-neurotic Todd and dad's just the guy to suss it out. Writer David Caspe (TV's 'Happy Endings') has come up with some amusing scenarios, including stories of how Han was raised and the resulting scars. Dad thinks the stretched heads of his son's NKotB tattoo from the 3rd grade are hilarious, prompting him to proudly show off his own misjudgment ('I have a tattoo of Tattoo - I thought that was funny.'). Todd's best man Phil's (SNL's Will Forte) idea of a stag party is found lacking, so Donny takes charge, calling in his old friends Champale (Luenell, "Borat," "Think Like a Man") and her daughter Brie (Ciara) at the Bacon and Leggs strip club (Route 1 in Peabody's Cabaret Lounge), but things get more personal when Donny takes Todd to visit his Uncle Van - Vanilla Ice (in a surprisingly appealing performance), now cooking chicken nuggets with 'Diff'rent Strokes' Todd Bridges. There are rude sexual shenanigans involving Grandma Delores, Jamie's childhood secret and Oscar winners (perhaps due to that Samberg SNL connection). And if Sandler featured Oscar winner Al Pacino in his last film, look for another "Godfather" alumni as a pugilistic priest. The movie also features "Rocky Balboa's" Milo Ventimiglia as Jamie's psychotic Marine brother Chad, Nick Swardson ("Just Go With It") as sozzled strip club patron Kenny and SNL's Rachel Dratch as Phil's wife. Sandler and Samberg have nice frictional chemistry. Production values on Sandler films can be abysmal ("Grown Ups"). This one kind of averages out, with nice presentation of Boston area locations mixed with some dodgy looking mid-film montages. Director Sean Anders ("Sex Drive") paces and weaves the story strands well and, after a thoroughly off-putting climax (even Sandler seems truly disgusted), goes out with one, final unexpected laugh, a payoff to a forgotten setup.