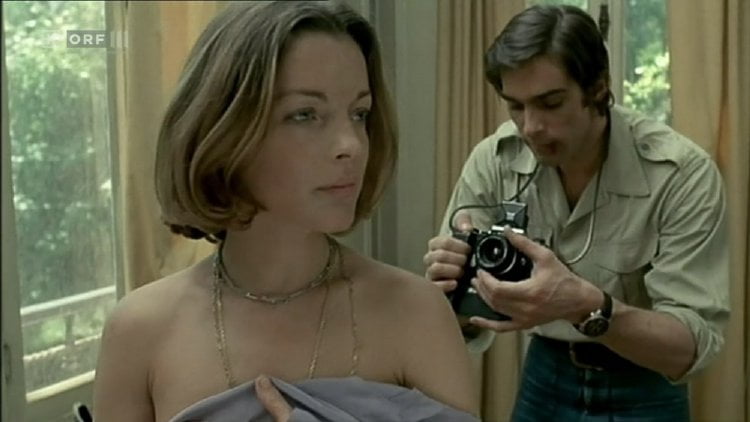 As a female soft core porn director barks at Nadine Chevalier (Romy Schneider) to say ‘Je T’Aime’ while astride a man covered in blood, still photographer Servais Mont (Fabio Testi) shoots the actress’s distraught face, unseen by all but her.  ‘I only do this to eat,’ she pleads to him as he’s chased off the movie set.  The next day, Servais shows up at the home she shares with husband Jacques (Jacques Dutronc) to get a shot worthy of a magazine cover for both their flagging careers, but Servais is also under Nadine’s spell in “That Most Important Thing: Love (L’Important C’est D’aimer).”

The cinema of cowriter (with Christopher Frank)/director Andrzej Zulawski ("Possession," "Cosmos") is peppered with artists, sexuality and love, often adapted, like this one, from novels.  His characters also often appear barking mad and the pornographers, filmmakers and actors here are no exception.  But there is method to Zulawski’s madness as he delves into relationships which include sex without love, love without sex, exploitative sex, sex with multiple partners and extramarital sex, his protagonists groping their way to love’s ultimate expression.  (In a not unexpected, but satisfying finale, Zulawski contrives to reinterpret his opening scene.)

It is notable that Nadine rejects the photographer’s suggestion to apply makeup, asking if her thirty year-old face is not good enough.  She is appearing before him more naked than she has the day before, when her tears, at least the ones not caught by her sweeping false eyelashes, streaked her mascara.  But Nadine declares her love for her husband, a gay man who we will learn saved her from addiction and possibly prostitution.  Jacques loves her too, but not in the way she wishes.  Servais attempts to boost Nadine’s self esteem, approaching Laurent Messala (Guy Mairesse) and Karl-Heinz Zimmer (Klaus Kinski) and offering to back their film of “Richard III” if they will ensure a part for Nadine.

Artists’ insecurity is a major theme here, Servais himself chafing against the porn images he shoots for Mazelli (Claude Dauphin).  When Nadine breaks down mid-scene during filming, it is Karl-Heinz who runs after her to ensure her she is not ‘old and washed-up,’ kissing her into believing in her desirability (a shot that Zuwalksi repeats in his finale).  Karl-Heinz will also embody the film’s other theme – the yearning for romantic love – in the anguish he reveals after an evening with two women (the character tells us he is gay, presumably in love with his drag queen director, Messala).  (Kinski fans will delight in his portrayal-within-a-portrayal of Richard III as well as his in-joke when he leaves for ‘Manaus and the Sarah Bernharadt Theater.’)

Georges Delerue's melodramatic violin score is often as over the top as this film’s artistic loonies, but it works to help convey the passion brewing between Servais and Nadine, expressed in longing looks.  Schneider, who won the Cesar Award for this role, is beautiful and fragile and loyal, an emotionally affecting lead.  Dutronc’s Jacques is an odd duck, his use of repetition an annoying character tic that labels him an inappropriate match for Nadine (yet one who sacrifices for love).  The handsome Testi hangs back, the observer his character’s profession requires.  Other lovelorn characters who parade through include Michel Robin’s Raymond Lapade, acknowledging his wife Luce (Nicoletta Machiavelli) is Servais’ lover, and Servais’ father (Roger Blin), hankering after the woman who makes fries at Wimpy’s.

“L’Important C’est D’aimer” is a heady whirlwind journey towards love amidst artists on the fringe.  Schneider’s broken heroine is haunting.

Director Andrzej Zulawski brings us, from way back in 1975, a romantic triangle story but one with a bit of a twist – everyone in this triangle is wrought with guilt, making for some amusing situations.

The filmmaker, I think, uses Servais more as an observer, rather than a participant, with his ever-present camera snapping shots. Yes, he lusts for Nadine, but there is an honorability about him that keeps him from hurting Jacques, who may not have his wife’s total love but surely has her loyalty. The emotional spins between the three are amusing and compelling.

“L’important c’est d’aimer” is part of the Film Movement retrospective featuring the striking Romy Schneider. Her Nadine is the object of affection of her two suitors but her feelings play more enigmatic than the guys'. It is also your chance to see that great ham of a thespian, Klaus Kinski, who plays Karl-Heinz Zimmer, a great ham of a thespian. Talk about good casting.