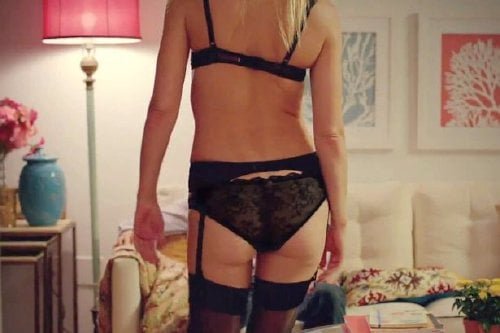 Three guys – Adam (Mark Ruffalo), Mike (Tim Robbins) and Neil (Josh Gad) – meet and become friends during their sex addiction 12-step meetings. Adam has been “sober” for five years and helps his friends cope with their addiction, especially Neil who needs it most in “Thanks for Sharing.”

Mike (Tim Robbins, "Mystic River") is a recovered alcoholic who's made it his life's work to help other addicts, like Adam (Mark Ruffalo, "The Avengers"), five years 'sober' as a sex junkie, and Neil (Josh Gad, "Jobs"), an ER doctor court-ordered to partake in the group. Mike pushes Adam to go out on a date as he waits for Neil's self denial to implode, but he must also face his own demons when his son Danny (Patrick Fugit, "Almost Famous), claiming to have foresworn the drugs, returns home in "Thanks for Sharing." "The Kids Are Alright" cowriter Stuart Blumberg makes an uneven directorial debut with a cast that helps smooth over his film's bumpy ride. Of the three stories being interwoven, Neil's unlikely partnering with new group member Dede (Alecia Moore aka Pink in a likable debut), a woman who cannot connect with the opposite sex without, well, sex, is ironically the most natural. Mike's initial antagonism towards Neil seems mystifying until we realize he's probably sensing the man's lack of commitment. Neil lies about his progress and fails to complete the work set for him by his mentor Adam. We'll soon learn that Mike's judgemental nature is a cover for his own feet of clay. But his confidence in Adam seems justified. After five years without any sex at all, Adam meets cute with Phoebe (Gwyneth Paltrow, "The Avengers") at an adventurous gourmand gathering (they're consuming insects) and the sparks are palpable. He's immediately handed a conundrum on their first date when Phoebe announces post-run that she'll never date another addict after sharing that she's a breast cancer survivor. Then she starts to move way too quickly, forcing his hand and the script's lamest parry (a 'booby prize' 'joke'). Dede calls Neil, who's she's chosen as her 'buddy,' in a state of panic and he goes to great lengths to reach her (sex addicts are forbidden from riding in NYC's subways), cementing a true bond. When Neil eventually crashes and burns badly with another work-related fiasco, Dede's there to help him pick up the pieces (and shake his booty with some surprisingly non-sexual interpretative dancing. A sound in the night convinces Mike's wife (Joely Richardson, 2011's "The Girl with the Dragon Tattoo") they have an intruder, but it turns out to be the son they haven't seen in years. She's ready to embrace his return, but when when one of her pill bottles is misplaced, Mike's ready to pin the blame. The entire concept of sex addiction is a difficult one for many to get their heads around and while Blumberg, cowriting with Matt Winston, gets some of it right, it mostly doesn't work. Ruffalo does the best job conveying the real anguish and devasting nature of the behavior, but it's difficult to believe a successful guy who looks like him could have remained off the NYC market for five full years and giving Paltrow her own 'addiction' (dietary and exercise obsessions) is a little too pat. Paltrow, while working initially as a potential mate, is a little too hard here when softer might be warranted. Gad, who amusingly shares a propensity for sweat with Paltrow, pulls off the character of Neil even though his 'addiction' is handled jokily, a series of bad boy 'pranks,' albeit thoroughly inappropriate (his relationship with a Carol Kane as his Jewish mother is a cliche). We get that Mike is pig-headed and self righteous towards his son, but why would Danny arrive at a family dinner with an over-sized chip on his shoulder just when they begin to bond? Every time "Thanks for Sharing" finds a groove, it jumps back out of it.

Tyro director Stuart Blumberg, with co-scripter Matt Winston, makes a rom com about sex addiction that is ambitious, maybe too ambitious. The large and talented ensemble cast tries hard to flesh out their characters but the source material is too shallowly drawn with its several different stories about sex addicts. The rom part of “”Thanks for Sharing” is between Adam and breast cancer survivor Phoebe (Gwyneth Paltrow). They meet at a grasshopper dinner party (where the diners eat cooked grasshoppers) and begin dating. Phoebe tells him that she once had a serious relationship with an addict that broke her heart and would never get involved with another. Adam does not reveal his addiction to her. The consequences of his decision will come back to haunt him. Mike is a long-time recovered alcoholic who sponsors other addicts as the lifeline when they think about going back to their old ways. He is very sympathetic to other addicts but does not give his son, Danny (Patrick Fugit), the same slack. Danny left home months before after stealing from his mother Katie (Joely Richardson) but shows up on their doorstep swearing that he is clean. Mike, having been burned by his son before, does not believe that Danny has changed his ways. Conflict between the two ensues. Neil is a genuine horndog, riding the subways of New York with the hope that he can get away with groping women on the crowded trains. When he gets caught, he is forced to go to 12-step meetings about his addiction but does not change his ways. When he is fired for using a toe camera to look up the dresses of his colleagues, the young doctor realizes he has hit rock bottom. His salvation turns out to be another sex addict, Dede (Alicia Moore AKA Pink). She freely admits to her addiction and calls Neil for help when she is about to fall off the wagon again. Pink, the novice among the veteran cast, delivers the best performance in “Thanks for Sharing.” There is another sex addiction film coming out soon. Joseph Gordon-Levitt writes, directs and stars in “Don Jon,” about an on-line porn addict and this is the better of the new “genre.” “Thanks for Sharing” tries to tell too many stories and does not give any of them more than a cursory look. The result is a film that has a manufactured screenplay lacking depth of character. The actors do their best but, in the end, are hindered by the script.