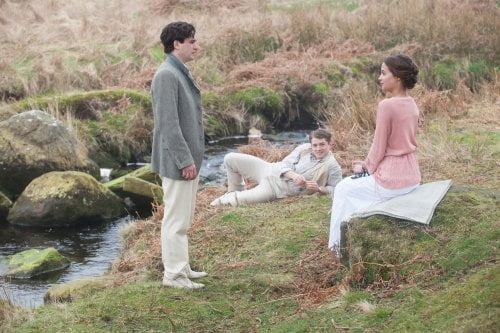 Vera Brittain (Alicia Vikander) is the pampered daughter of a well-to-do family living outside of London. She takes her exams to enter Oxford University and is accepted. Her idyllic life will come to a screeching halt when the news comes of the assassination of Arch Duke Ferdinand and the start of the Great War. Her life, and the lives of everyone around her, will change dramatically in “Testament of Youth.”

In 1914, Vera Brittain (Alicia Vikander, "Ex Machina") wanted nothing more than to study at Oxford alongside her brother Edward (Taron Egerton, "Kingsman: The Secret Service") and his friends. Her brother convinced their parents to let her go, but, once there, she was alone, her fiance and fellow aspiring writer Roland Leighton (Kit Harington, "Pompeii") and brother having both left for the front. Discontent with her dream now that her young men were fighting, Vera left her studies to follow them onto the battlefield as a nurse, later describing her experiences and the futility of war in her memoir "Testament of Youth." Vera, the lone non-celebrant amidst London throngs on Armistice Day in 1918, seeks refuge in a Church and gets lost in Francis Danby's Biblical painting The Deluge, imagining herself drowning in its depths. British television director James Kent and screenwriter Juliette Towhidi ("Calendar Girls") use the watery imagery to return us to happier times, as Vera swims near her home accompanied by Edward and their friend Victor Richardson (Colin Morgan, TV's 'Merlin') whom Ted teases for his obvious crush on his sister. Another friend, Roland, arrives in time to overhear Vera announcing her intentions to never marry, and the four travel 'the white ribbon' to the water again, a scene so full of innocence and hope we know it is doomed. Kent has fashioned a beautiful period production which follows an early feminist who becomes an outspoken pacifist at the close of WWI. Swedish actress Vikander's star has been rising on a global scale, stepping into this project when Saoirse Ronan had to back out, and she is perfect as the young Englishwoman constrained by the countryside and her conservative parents (Dominic West, Showtime's 'The Affair' and Emily Watson, "Breaking the Waves"). Vikander plays her as a serious-minded youth who bucks against tradition then finds herself open to romance when she meets someone interested in her mind. She's no shrinking violet, as can be seen when she dismissed as a debutante by Somerville College's Miss Lorimer (Miranda Richardson, "Dance with a Stranger"), then later when she takes it upon herself to make a substitution for the admittance exam's unanticipated Latin essay (she writes in German, a language which will prove more useful). She finds additional inner strength when, after having returned her brother's favor by convincing dad to let him enlist, she first humbles herself to work at London General hospital under the unsentimental leadership of Sister Jones (Niamh Cusack, "Five Minutes of Heaven"). After righting the emotional turmoil of Roland on a weekend leave, she learns of his death on what was meant to be her wedding day (an appropriate spot to stop and marvel at the finds and creations of costume designer Consolata Boyle ("The Queen," "The Iron Lady"), whose exquisite work bears the stamp of hand crafting) and, determined to save the rest, travels to Étaples in France where the horrors are grimmer but the administration of Sister Milroy (Hayley Atwell, "Captain America: The First Avenger") kinder. At first shocked to discover she'll be ministering to Germans, Vera has trouble adjusting to the fact that she's working to save men her brother is trying to kill, then realizes war's utter folly as she eases a young man (Adam Ganne, "Fury") into death masquerading as his German sweetheart. It's an incredibly moving scene and among the most powerful anti-war messages to flicker across a screen. There are other moments that linger as well - Victor's emotional bravery in the face of Vera's sympathy, the unapologetic giggling following a kiss caught by formidable chaperone Aunt Belle (Joanna Scanlan, "The Invisible Woman"), the way Vera braces Miss Lorimer after handing her a telegram, Vera's frustrated resignation with her sheltered mother's inability to cope. The film wobbles a bit in the last stretch, the adaptation, which concludes years earlier than the memoir, overstuffing the last act. The character of Geoffrey Thurlow (Jonathan Bailey, BBCA's 'Broadchurch') suddenly becomes prominent while important ally Winifred Holtby (Alexandra Roach, "One Chance") is introduced as a motivating force. Future husband George Catlin (Henry Garrett, "Red Tails"), first met in hospital on the arm of a convalescent nurse (Emily Bevan, BBCA's 'In the Flesh'), is the officer who provides a stage for Vera's unpopular politics. The film is often breathtaking, cinematographer Rob Hardy ("The Invisible Woman") contrasting sunlit pastels with far darker tones as the war sets in (as the peaches and cream of Vikander's wardrobe gives way to burgundies and browns). Hardy fails to expand the obviously economical French set, however, his attempt at a "Gone With the Wind" homage hamstrung. For his conclusion, Kent returns to the placid waters of his film's earlier days, thoughts of drowning replaced by renewal and rebirth. Grade:

Azazel Jacobs, who brought us the near-autobiographical “Momma’s Man” in 2008, shows that he has a deft hand in writing and directing and “Terri” represents the next step – up – in his career. He elicits solid performances from his young cast and John C. Reilly brings his talent, experience and comedic timing to his Mr. Fitzgerald – a man who came from a similar, difficult childhood as Terri. Newcomer to the feature film scene, Jacob Wysocki, makes a splash as a dysfunctional young man on the verge of adulthood. He is lucky to have a mentor like Mr. Fitz. The other principal characters - pretty but conflicted Heather (Olivia Crocicchia), troubled Chad (Bridger Zadina), who exhibits his insecure neurosis by pulling his own hair out in clumps, and Terri’s over-medicated Uncle James ( Creed Bratton from TV’s “The Office”) – make this an ensemble film where you care about the characters and their problems. “Terri” is a total package and a very different coming-of-age fim. Terri is not the most sympathetic character, when you first meet him, but the newcomer and his writer-director make the boy a flesh-and-blood character. Unfortunately, this fine little film is not likely to grab a share of the box office dominated by summer blockbusters. However, if you are tired of Transformers and superhero flicks and want something of more substance and feeling, then give “Terri” a try.