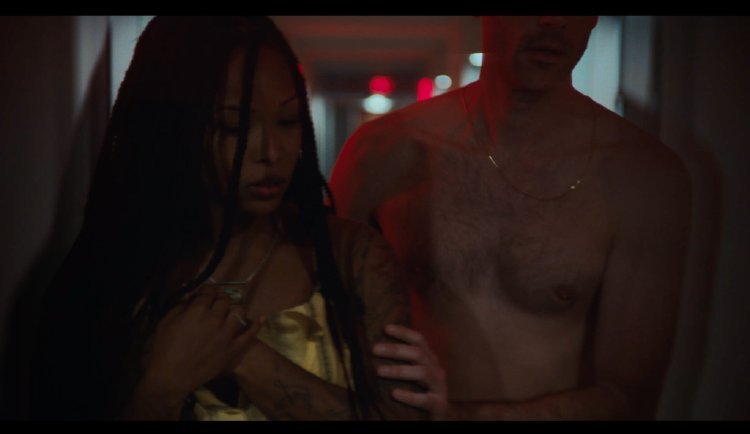 Austin tattoo artist Evan Chambers (Will Brill, giving off a John Hawkes vibe) admits later he had Dutch courage on his side when he asked Renesha Bell (Brittany S. Hall, HBO's 'Ballers') for her phone number at a club.  She chides him when she runs into him outside a grocery store for never having called, evoking that admission and an instant, if somewhat bashful, connection.  He’s clearly infatuated and she’s affectionately amused by his offbeat charms, enough so that they begin to share his homey bungalow.  But when a girls' night out goes terribly wrong, Evan and Renesha find their relationship suspended in a “Test Pattern.”

For their feature debut writer/director Shatara Michelle Ford analyzes weighty issues through the eyes of a Black woman in a biracial relationship.  There are echoes here of Michaela Coel’s ‘I May Destroy You,’ in both subject matter and morphing tone, but Ford’s protagonist is less aggressive, their lover’s misguided sense of chivalry cloaking the film’s last act with an air of desperate melancholy.

In the film’s first act we watch a relationship bloom.  It’s surprising to see Renesha give Evan her phone number as she seems a bit out of his league, but perhaps she’s sensed the kindness and respectful decency we will come to see in him.  He calls her before either has gotten home with their respective groceries and an impromptu date at a Chinese restaurant provides the usual first date backgrounds.  She moved to Austin for graduate school and has stayed for a new job as the local SPCA’s development director while he’s a native tattoo artist.  He brings her a plant when she cooks dinner.  She moves into his greenery filled home where he serves her gourmet breakfasts and encourages her to go to the Hacienda Club without him when her friend Amber (Gail Bean, HBO's 'Insecure') texts.

The second act finds Renesha cautious about her alcohol intake because of her new job while Amber’s more open to partying, so when Chris (Ben Levin) and Mike (Drew Fuller) approach it’s not too long before Amber’s on the dance floor.  Mike claims to be celebrating the success of a newly launched entrepreneurship and pours on the flattery to get Renesha to follow her friend’s lead.  While the three indulge in shots, Renesha places her full glass back on the bar but Amber convinces her to try a weed gummy bear.  Ford creates a disorienting POV, a sense of control totally slipping away, before cutting back to her opening shot of a glass slipping between a sitting Black woman’s hands, a white male removing it and sitting beside her on the bed she’ll wake up in.

The sweet romance followed by the increasingly ominous club scenario where it is implied Renesha was drugged over and above that consensual if peer-pressured gummy bear lead into a third act which sees Evan, or ‘Snoopy,’ as his girlfriend affectionately calls him, intent on criminally accusing her assaulter.  It is here where Ford addresses numerous issues and where the couple’s racial differences are most distinct.  While Evan is uncommonly understanding and protective of the apologetic Renesha, who tells him about waking up in a stranger’s bed and not remembering how she got there, his male desire to take action fails to take Renesha’s feelings into account.  There are demands for a ‘rape kit,’ yet the couple find out not every hospital is staffed with professionals trained to administer them.  By the time they arrive at the third hospital they have been offhandedly referred to, we notice the percentage of Black patients has risen dramatically.  It is also the first place where she is treated with real compassion by Nurse Peg (Amani Starnes). In Renesha we see resignation, in Evan increasing frustration and their divergent reactions form a wedge, especially when Evan really oversteps, calling in a police report over her protests.

There is a scene which we may presume is a flashback, although it is not entirely clear, especially given Renesha’s changing hair length and style, where the racial difference between the couple is raised without ever being specifically stated and which is recognized and resolved happily.  Does empathy vanish under stress?  There is much to ponder here and Ford has crafted a unique perspective with which to do so.  It should also be noted that Rob Rusli’s score with its plucked strings and driving percussion is an integral contribution to creating the film’s mood.

Kino Lorber releases "Test Pattern" on 2/19/21 - it can be screened virtually here.